With the last three posts being pretty negative reviews of my route to work I thought I'd redress the mood slightly with something more positive. We bought our daughter, Emily, a 1980's Dawes Lady Galaxy just before Christmas with the intention of turning it into a sit up and beg bike. Her specification was she wanted a bike with a basket on the front. Most new bikes that would fulfil this are pretty hefty beasts and so the Galaxy was bought as a more lightweight and better quality route. It's not been converted yet and she's done a couple of longer rides as well as using it for a short commute. 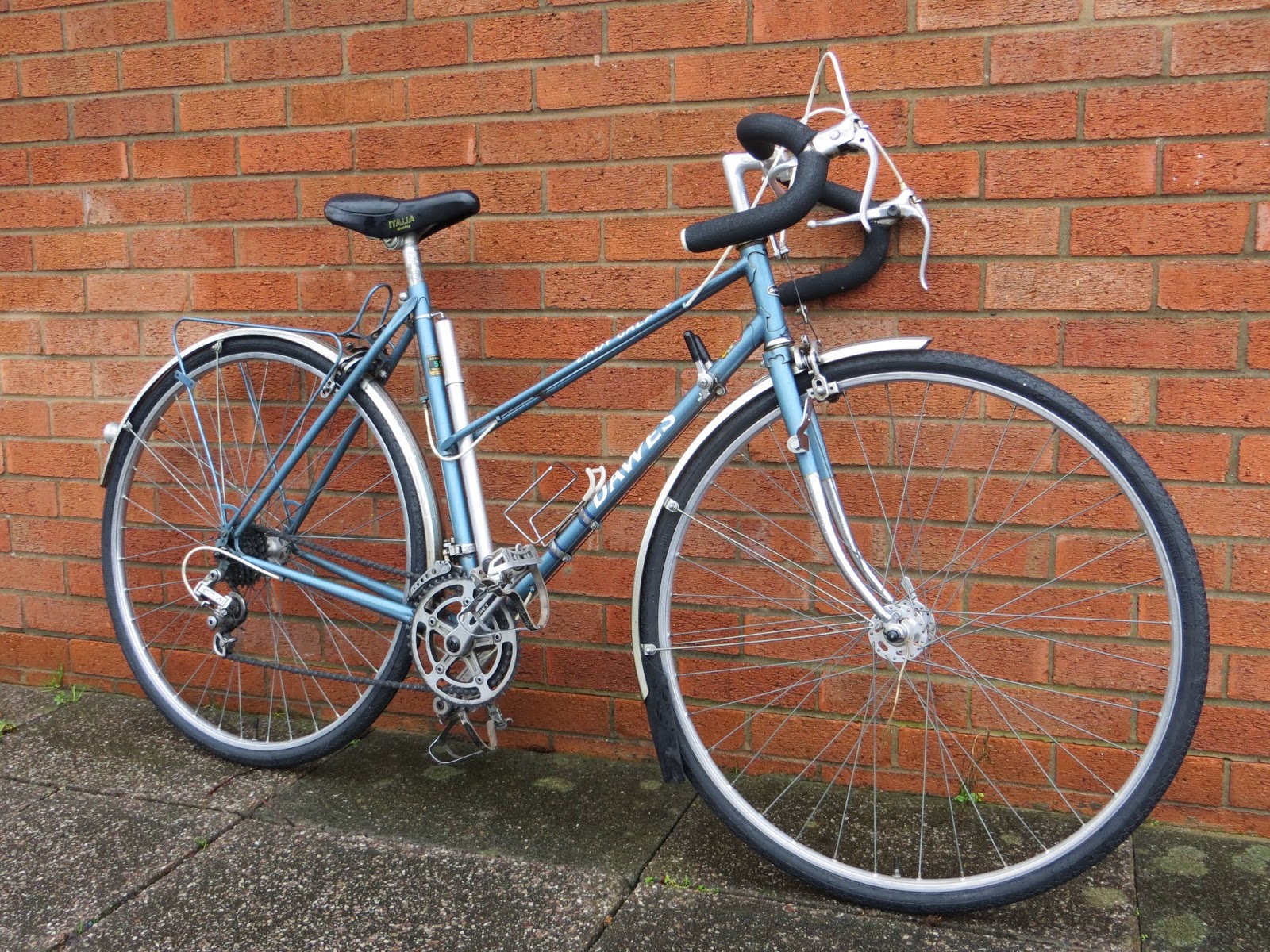 These longer rides have resulted in her now also wanting a road bike (n+1). Road bike is a bit of an open term covering all sorts from race to touring bikes. Whilst she had ridden the Galaxy and could have a ride on my wife's Surly Cross Check to get an idea of what a touring oriented bike felt like we had no means of giving her a try on a race bike other than being cheeky and wasting a local shop's time.

I gambled on the fact that she's young and had been talking about riding with the local club so she was more likely to be wanting a race type bike. Having almost all of the bits other than a frame it would also be a reasonably cheap bike to build to the point of being able to try it. If it turns out that this is what she wants then the secondhand parts can be replaced with more appropriate new ones. If not the frame can probably be sold on without too much loss of money.

First off, a bit of negativity. The source of many of the 'other' parts is my Surly Cross Check. This was a brilliant bike and had served me well for nearly four years as a daily commuter and for many longer rides both individually and with the club. However, in December I had a collision with a low life in a car who decided to clear off. That is a story for another day, the result though was that whilst I was unharmed the Cross Check was a write off with the rear of the frame severely damaged along with several significant parts. The first job in building Emily's new bike was to strip off and clean the usable parts from the Cross Check.
For the frame I plumped for the popular Dolan Proffisio frameset. This is a bargain price for a frame that has a good reputation and will provide her with a bike capable of being used as a winter bike (it will take mudguards) should she become serious about riding. 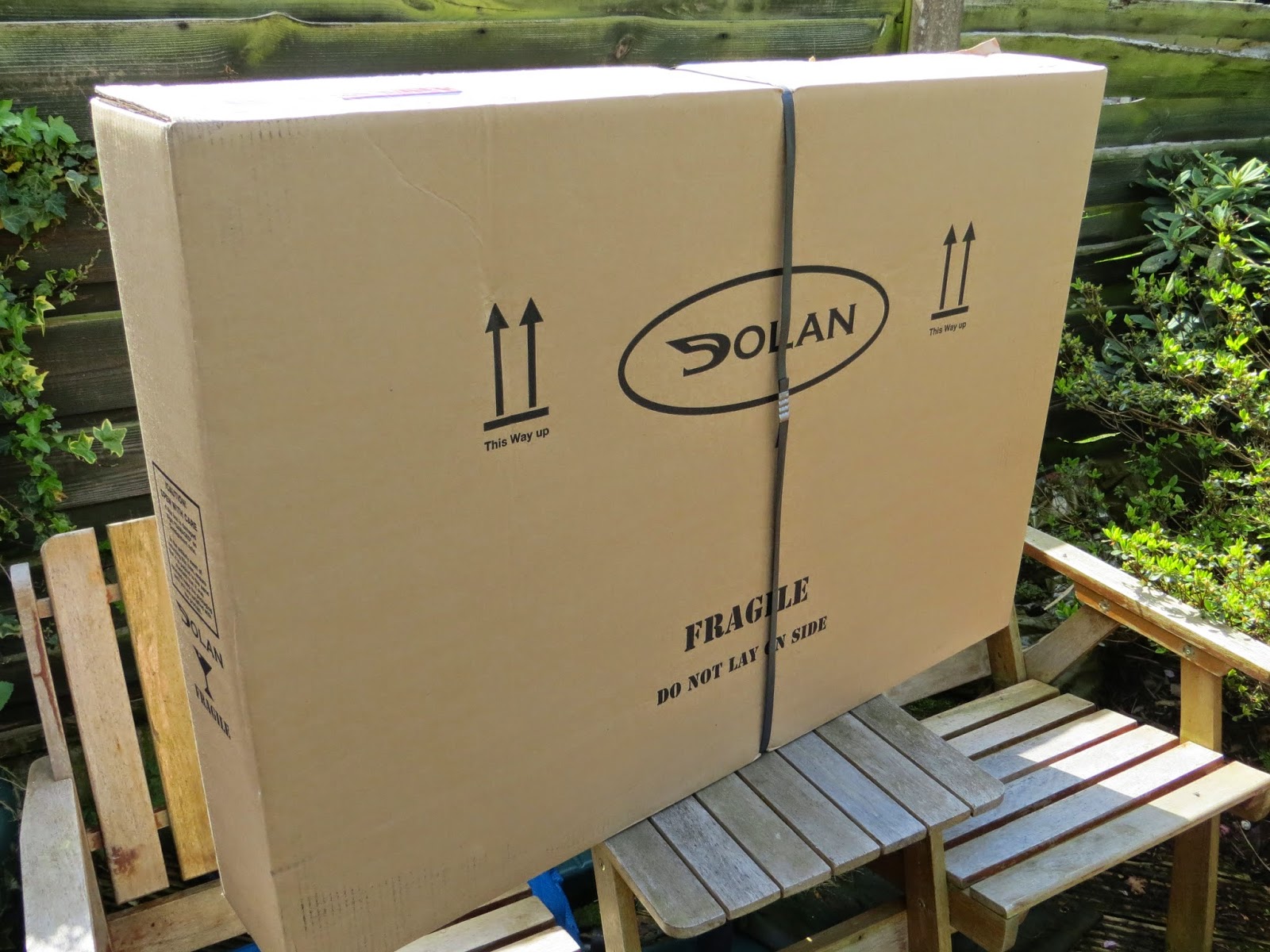 The frame came well wrapped from Dolan via Parcel Force. 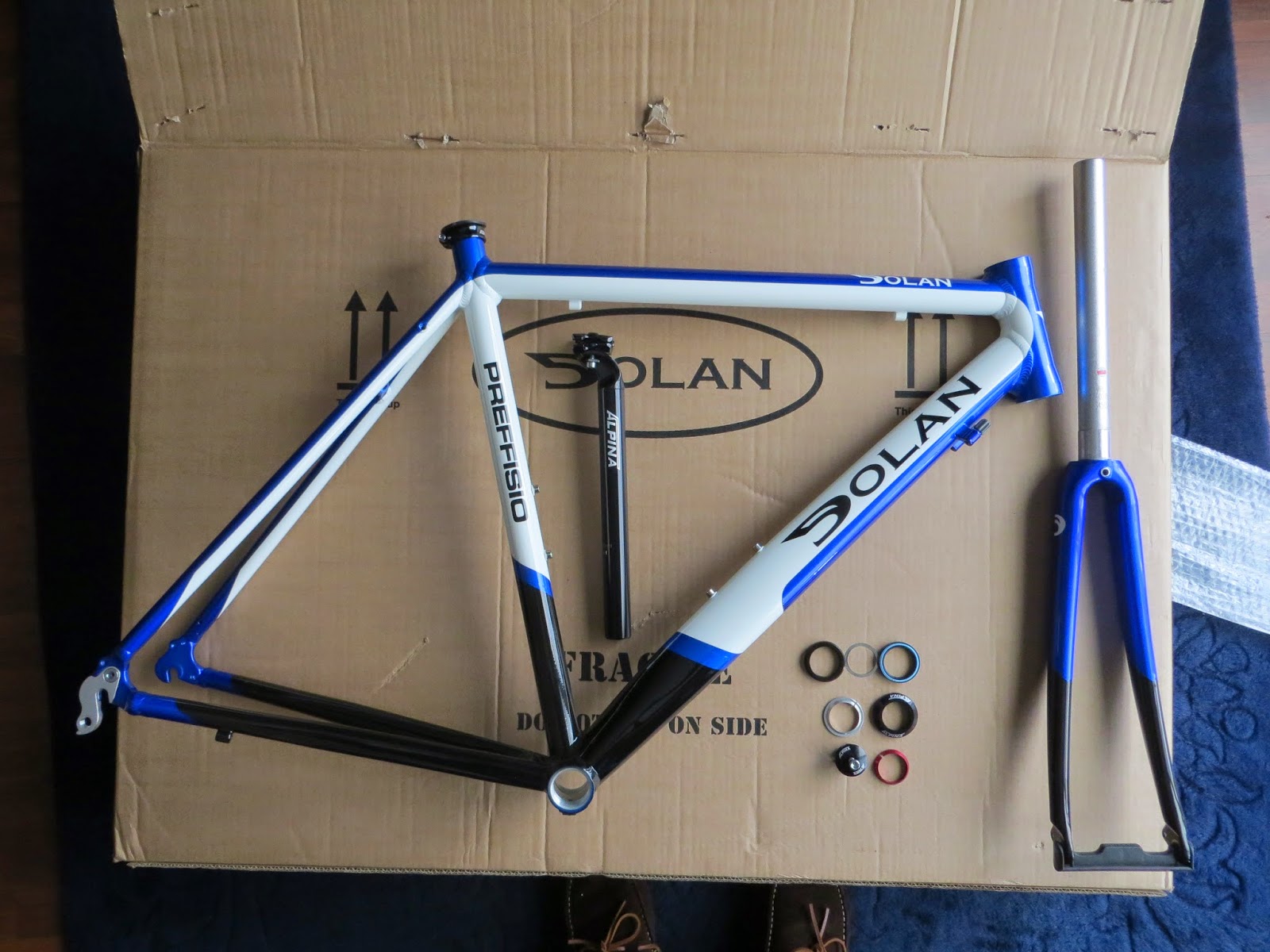 It's not just the frame that you get but the fork, headset, seat post and seat clamp.

First job is to fit the headset. This is an integrated version, i.e. the bearings sit directly in the frame so there are no bearing cups to press into the frame. Also the crown race (the bit that fits around the steering column at the top of the fork) is split so there will be no need for extreme force to get it seated. 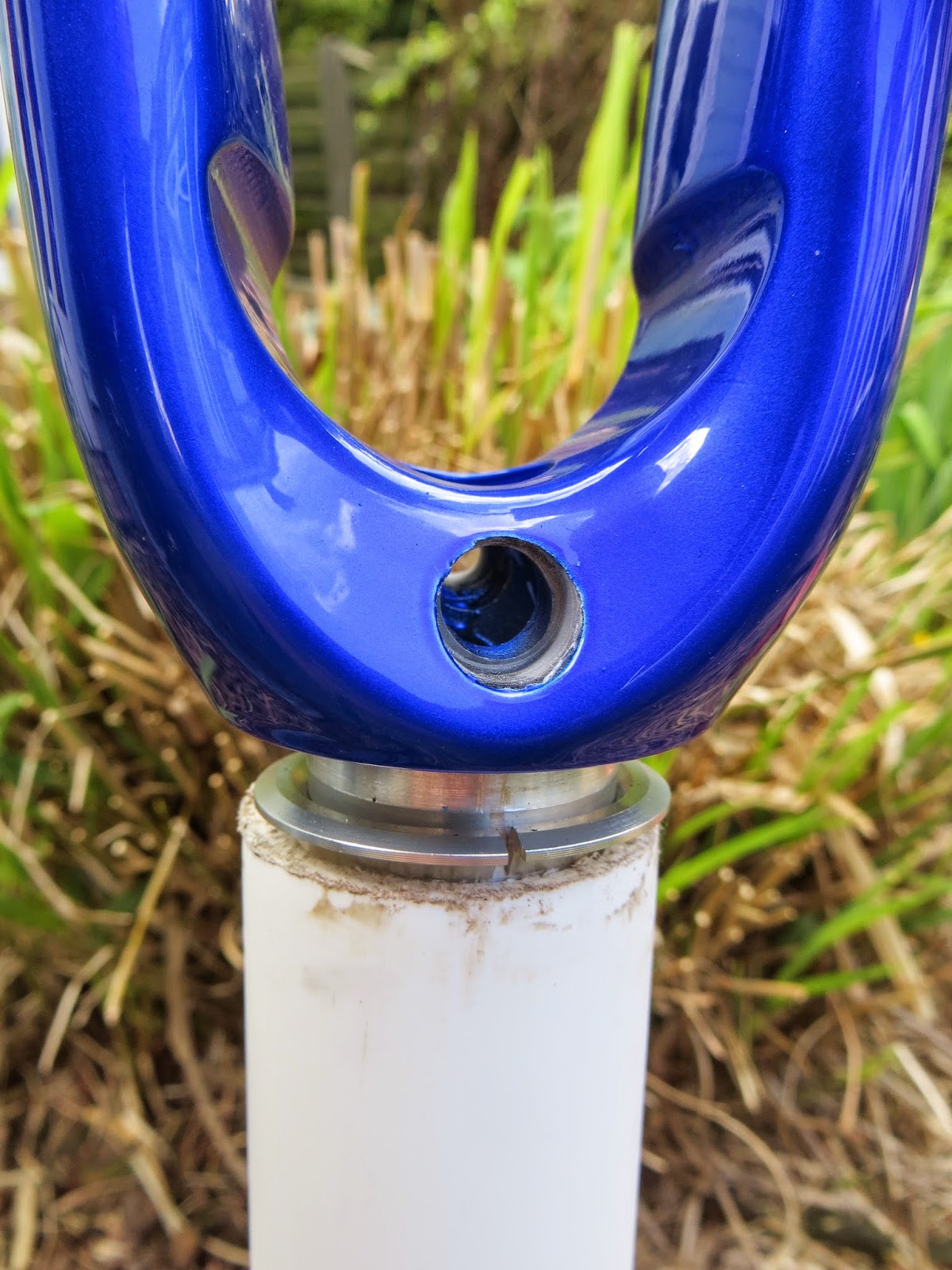 To make sure that the crown race is seated properly I use a piece of plastic piping. NOTE : tip the fork upside down and knock it down into the tube. Don't put the fork on the ground and ram the pipe down on to it, it probably won't like it! 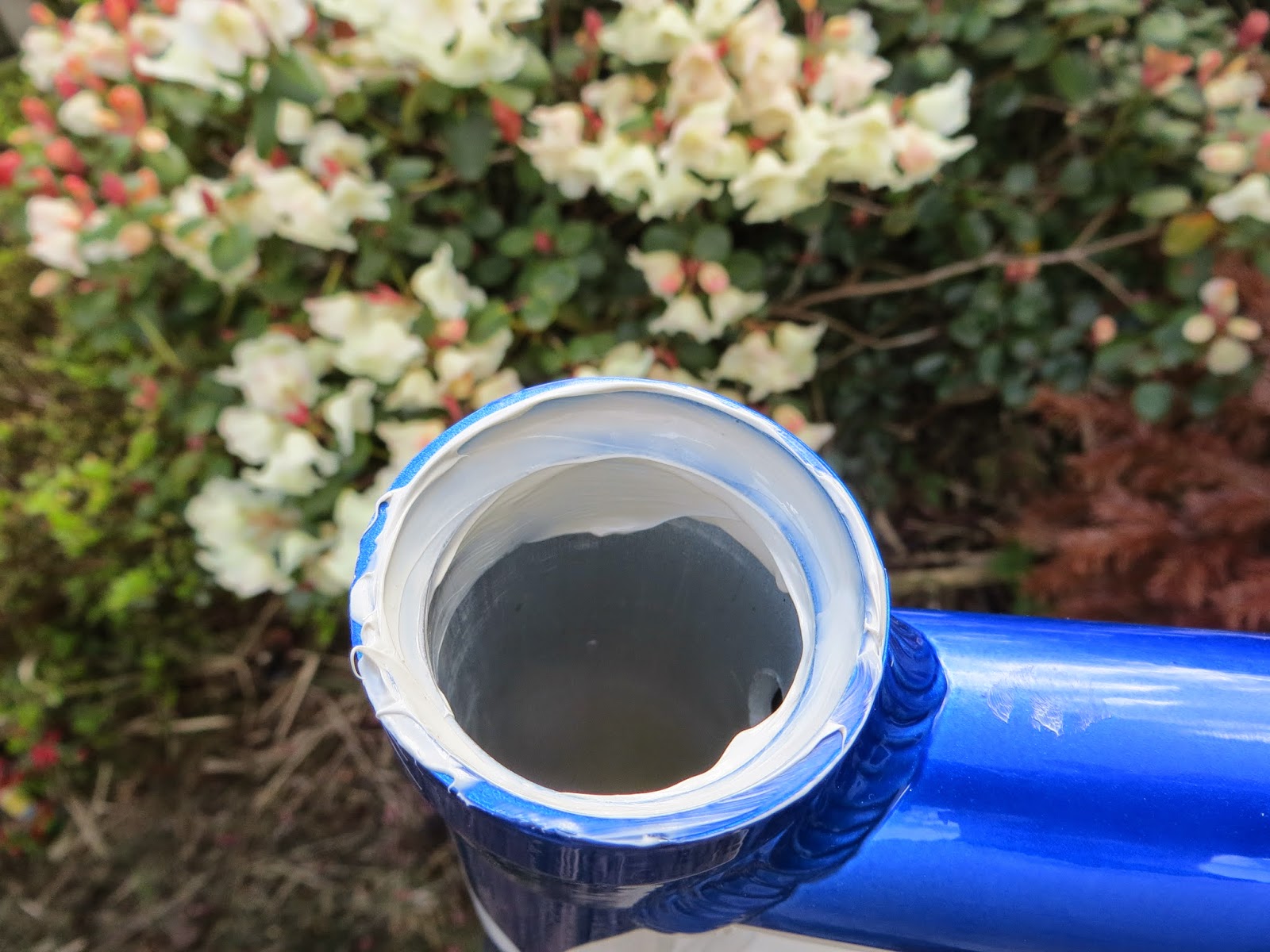 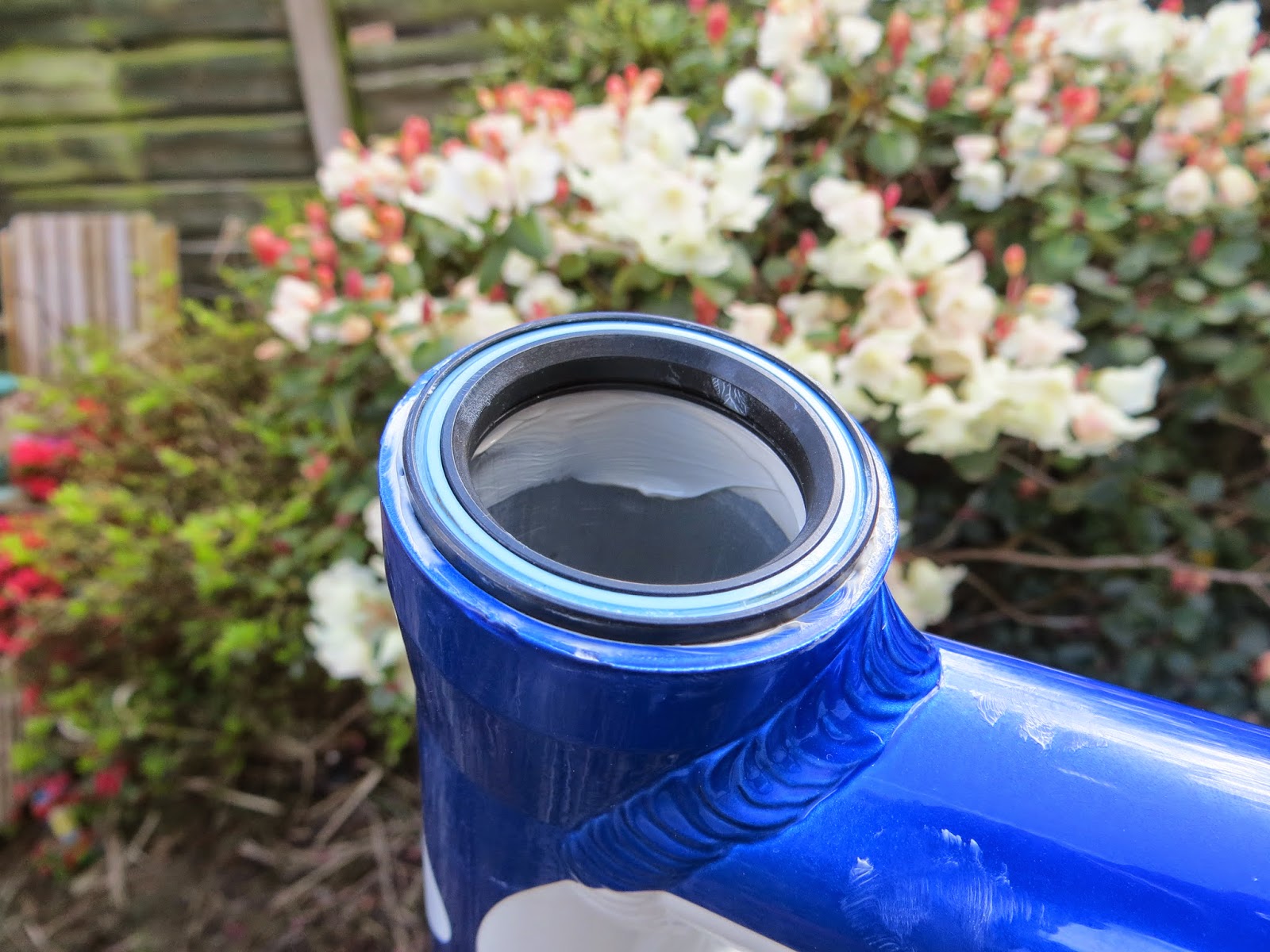 Plenty of grease in the frame before the bearings are pushed firmly home by hand. You have to ensure they go in square otherwise they will jam. Just push in different places as you push the bearing in. This was repeated for the lower bearing. 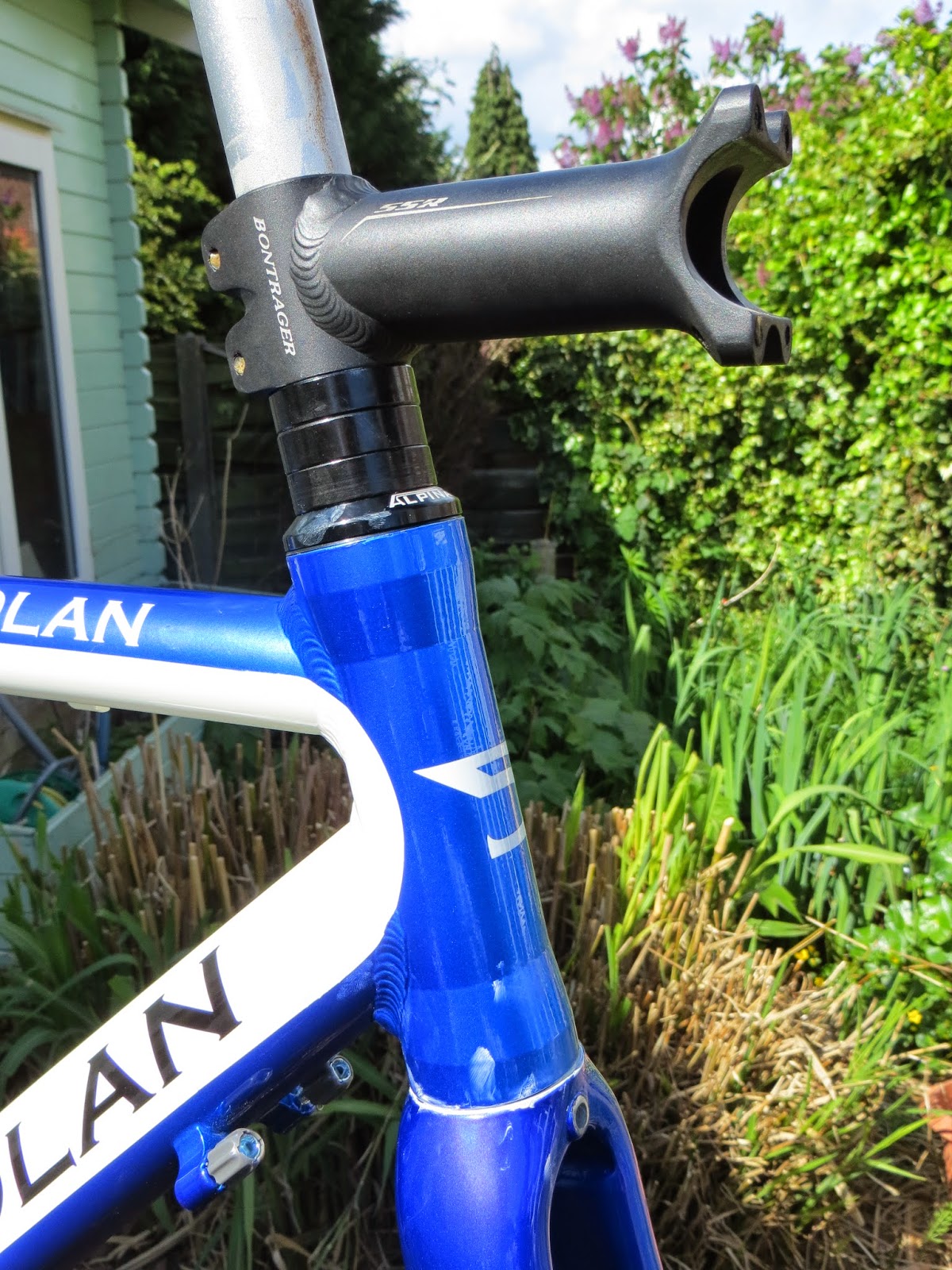 Headset done. Stem is on purely to stop the fork dropping out. 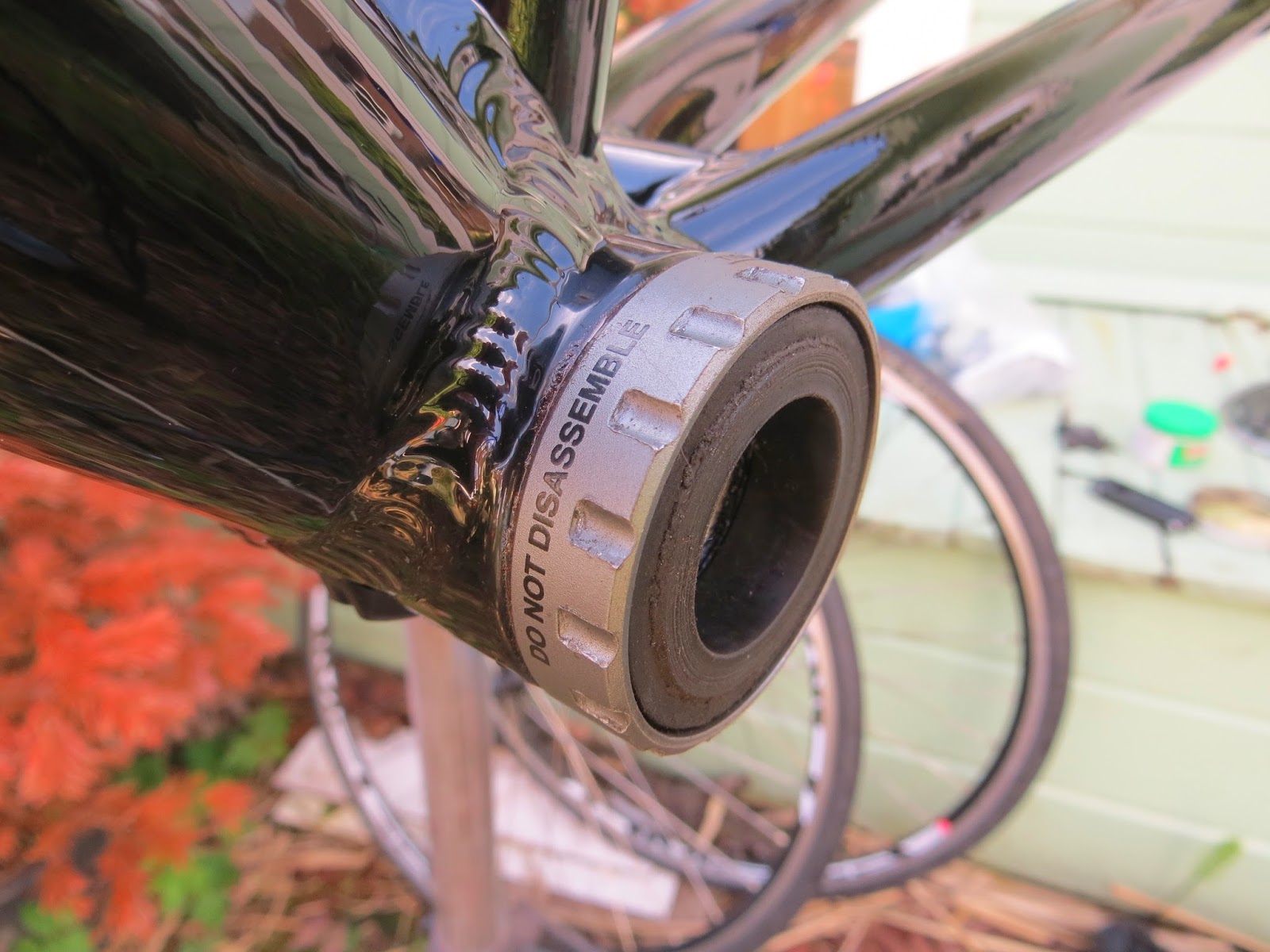 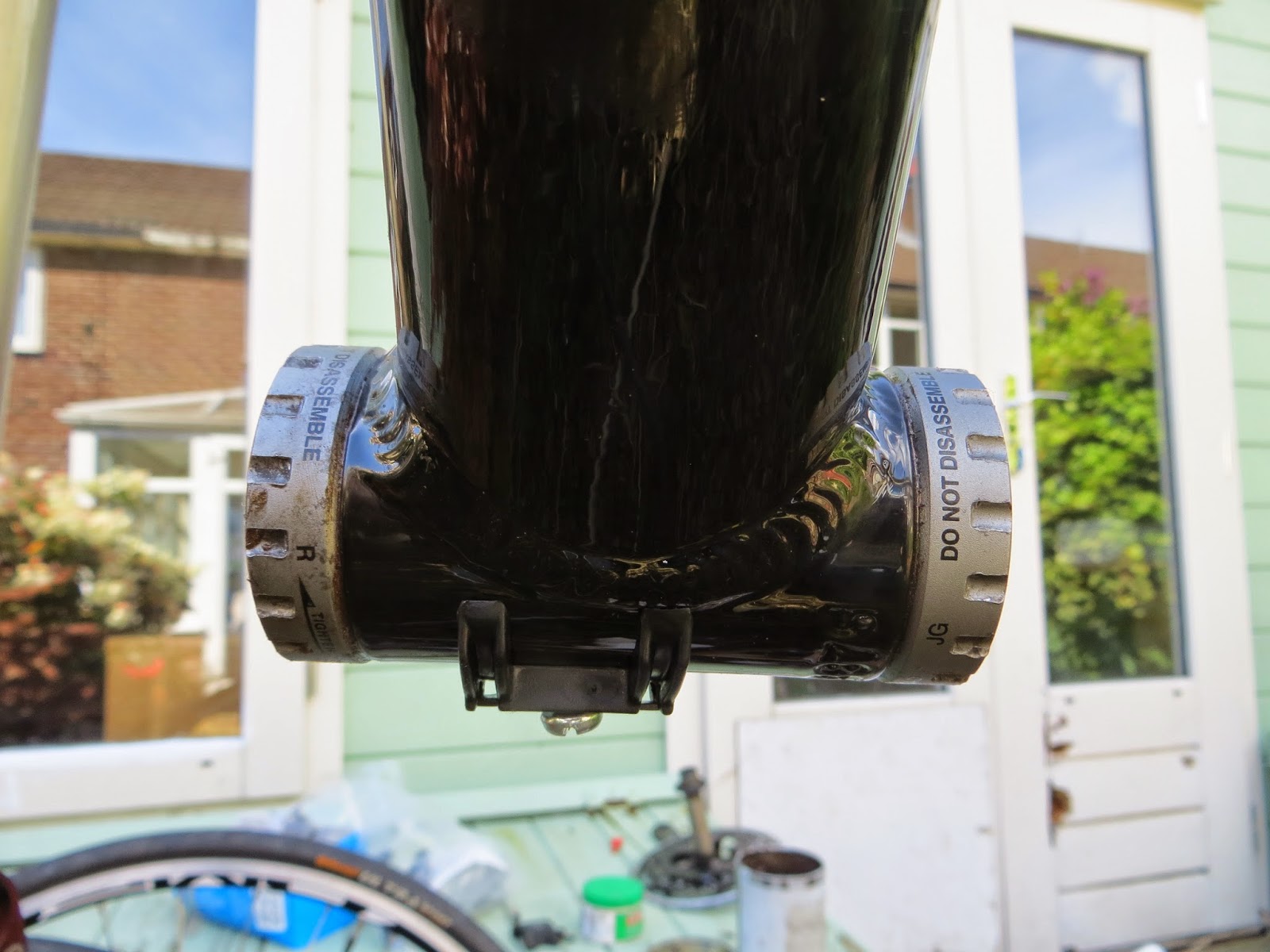 Hollowtech bottom bracket fitted. This needs the special spanner to fit those splines and note that the cups each have arrows showing you which way to tighten them. The drive side (right hand) is a reverse thread. The threads were also copper slipped before fitting just to ensure that they didn't seize to the frame. 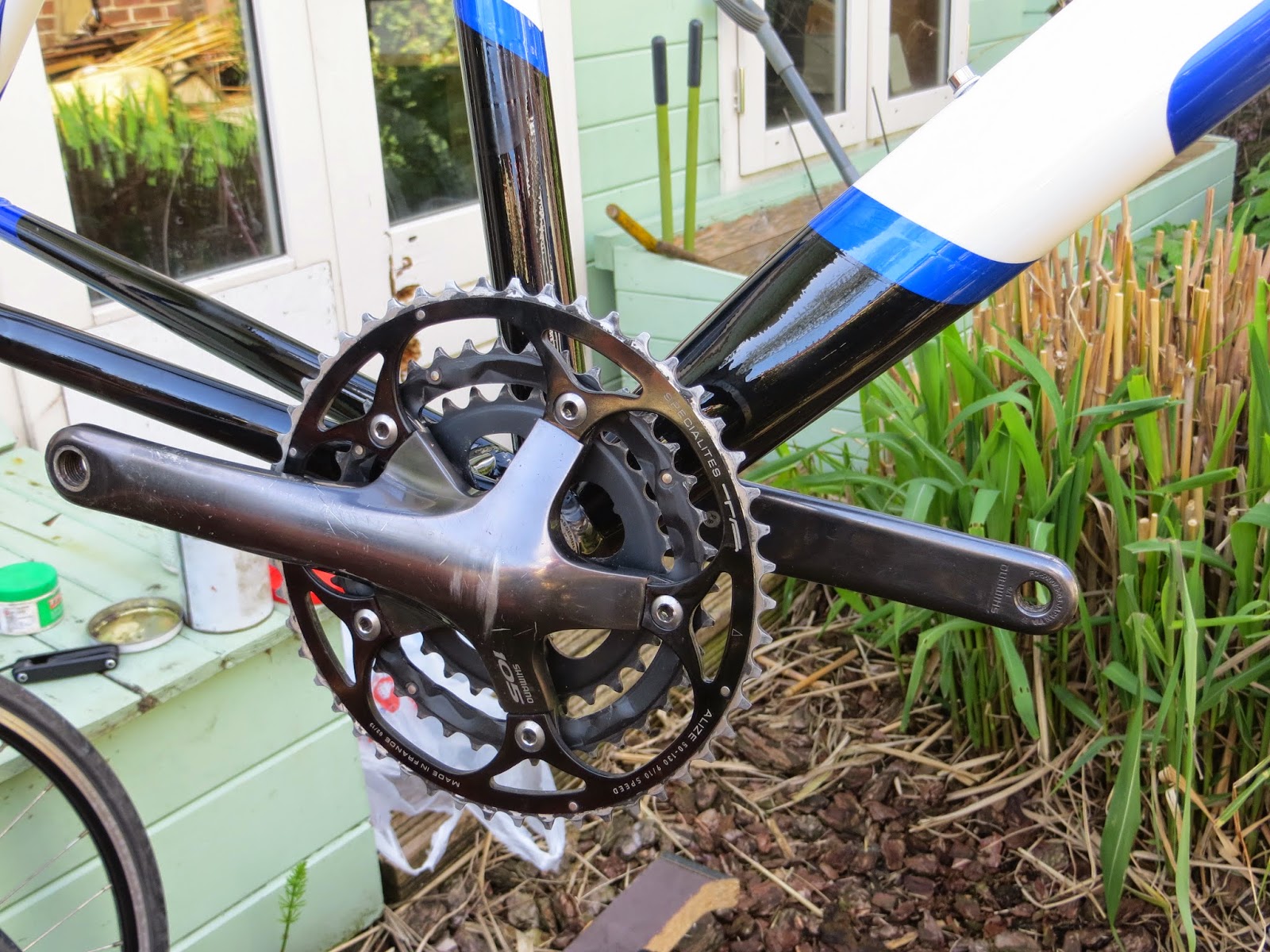 Fit both halves of the cranks. Be careful that you insert the correct, if any washers, otherwise the left hand crank may not be on the axle properly. 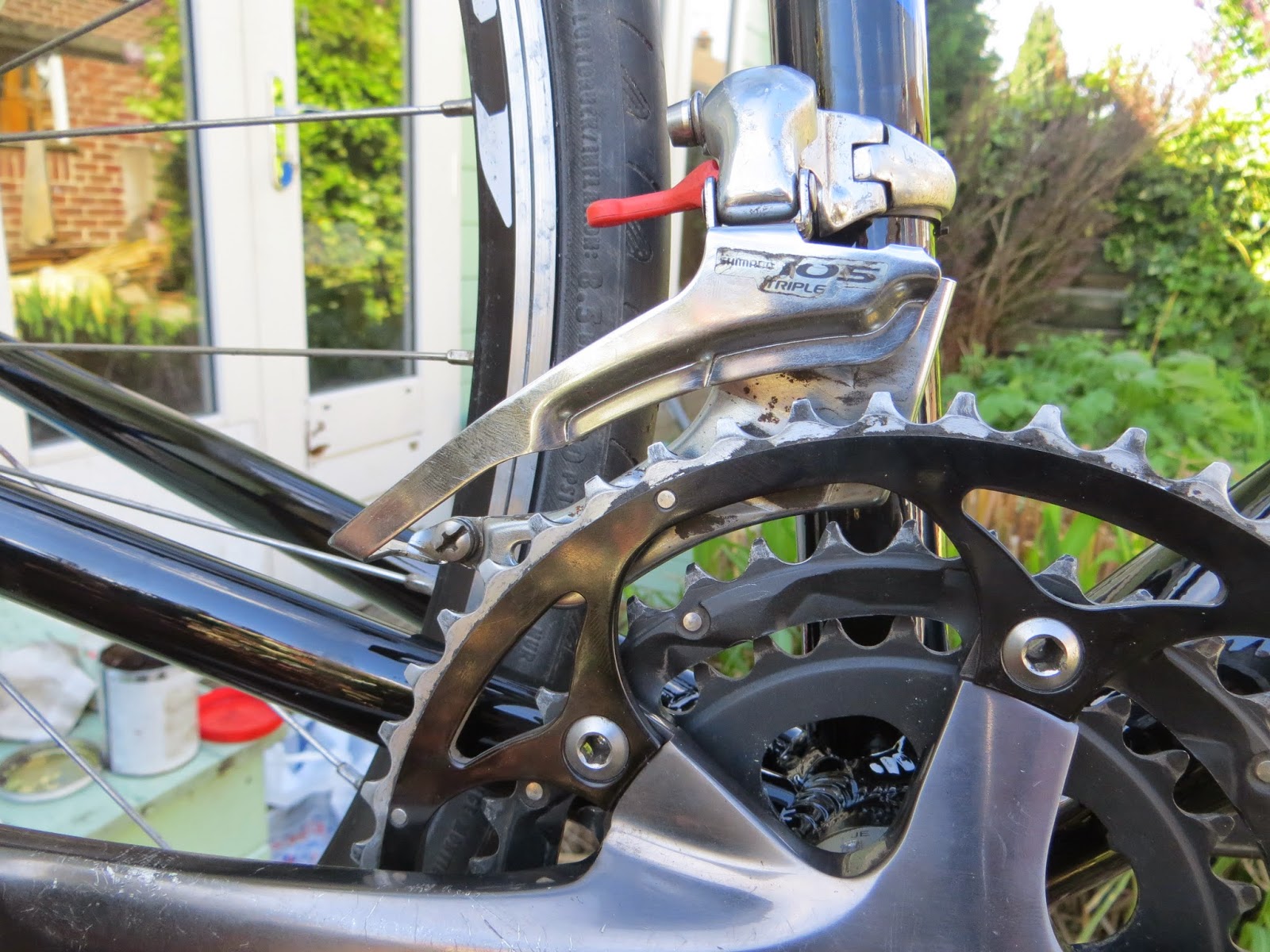 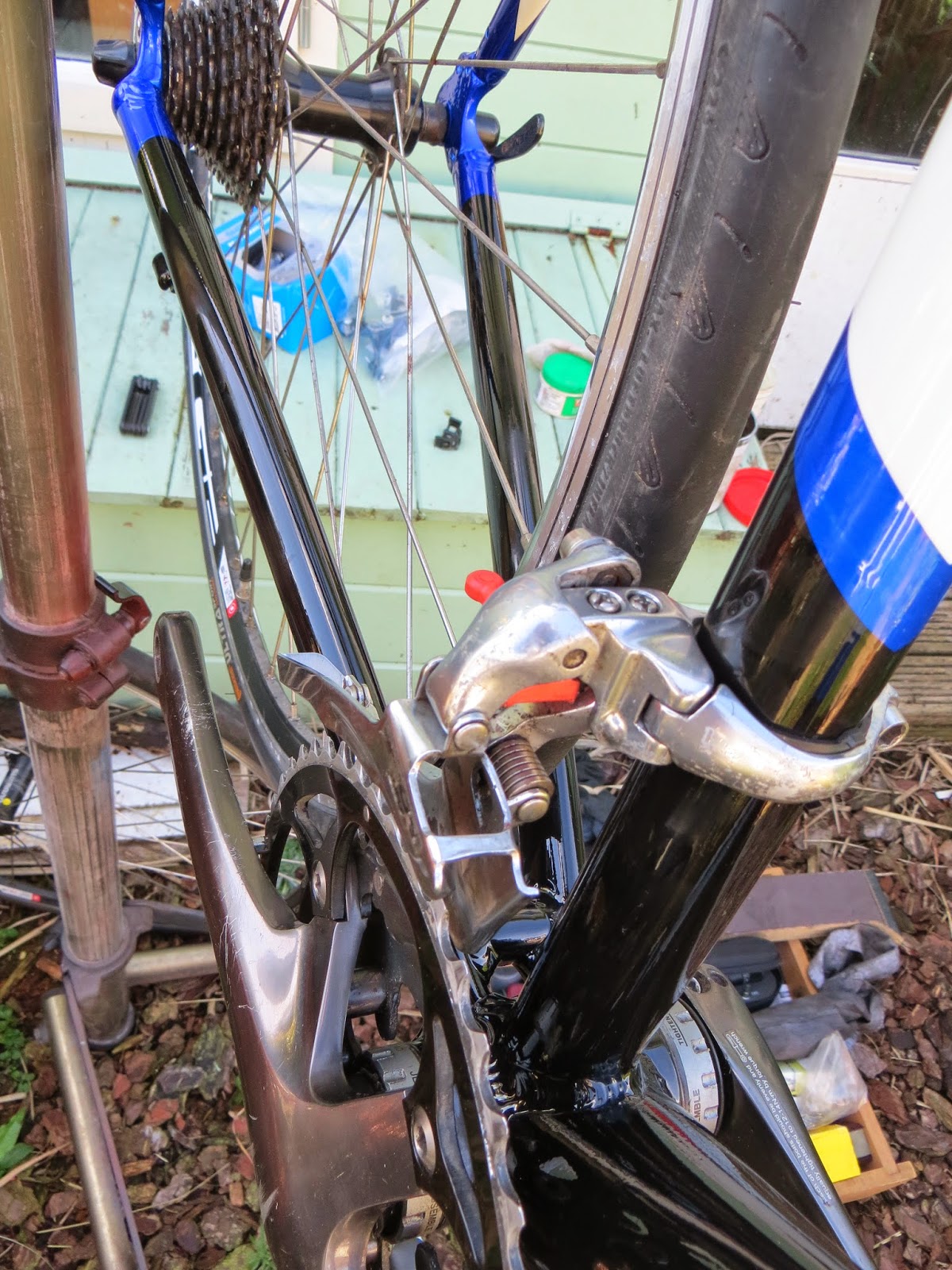 The wheels were then fitted before the front dérailleur. Thankfully I had one of the bits of plastic that new mechanisms come with to hold the mech in the high gear. This is the red bit of plastic in the photo and it makes aligning the mech much easier. The parts bin also provided the correct shims for this downtube compared with the narrower steel tube of the Cross Check. The rear dérailleur was also fitted at this point. 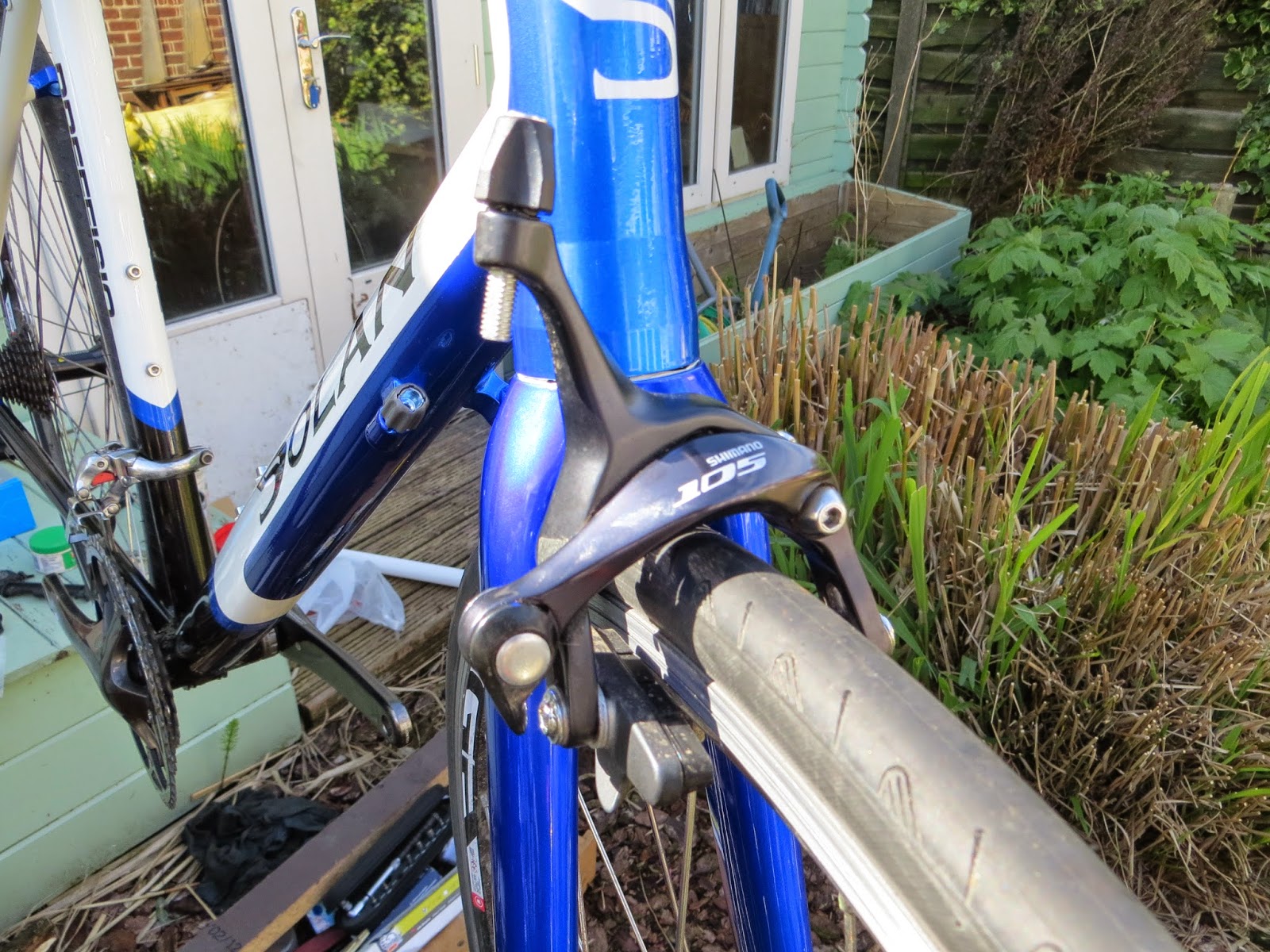 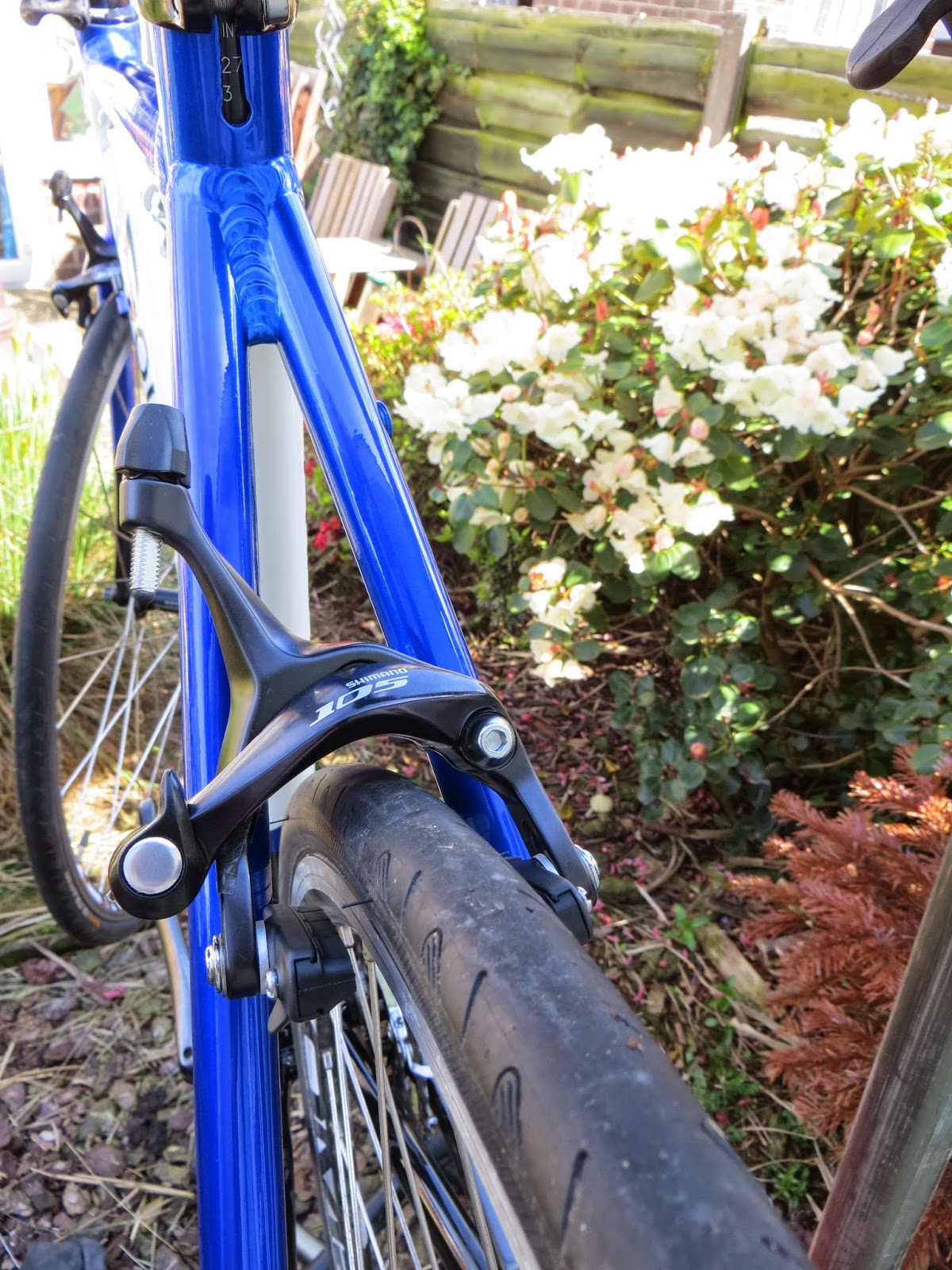 Before you fit the brakes put the bike on the ground and make sure that the wheels are seated properly. The brakes simply bolt to the frame or fork, but just before you do the final tightening squeeze the blocks together to centralise the brake on the wheel. It probably won't be perfect but it will be thereabouts. 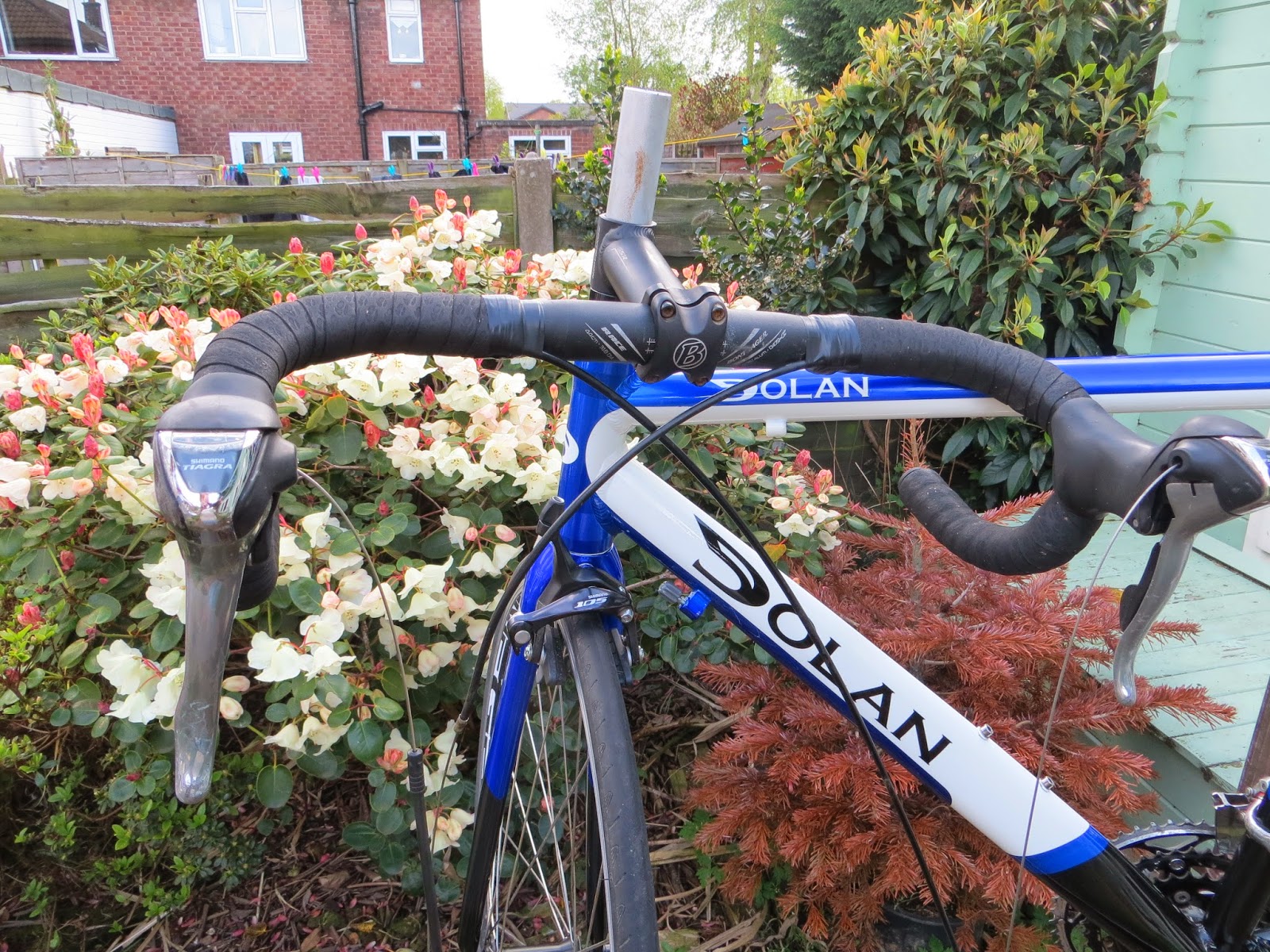 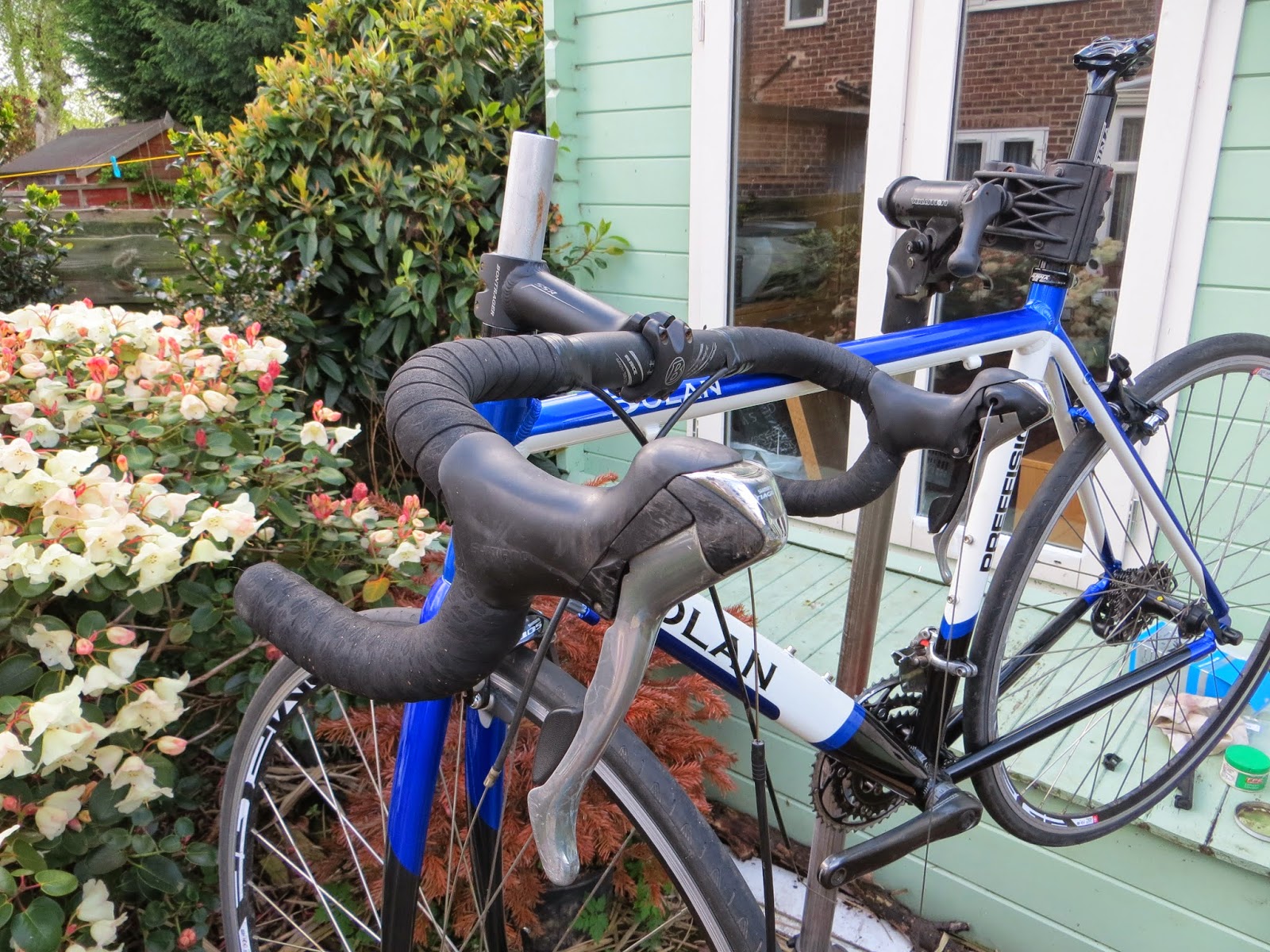 In true Blue Peter tradition here's one I prepared earlier. Handlebars are a straight swap which saved several jobs, though they are far too wide. NOTE : if you are building a bike with unwrapped handlebars be aware that they will take chunks out of the paintwork as they swing round. If you can't stop them swinging then wrap the ends in duck tape. 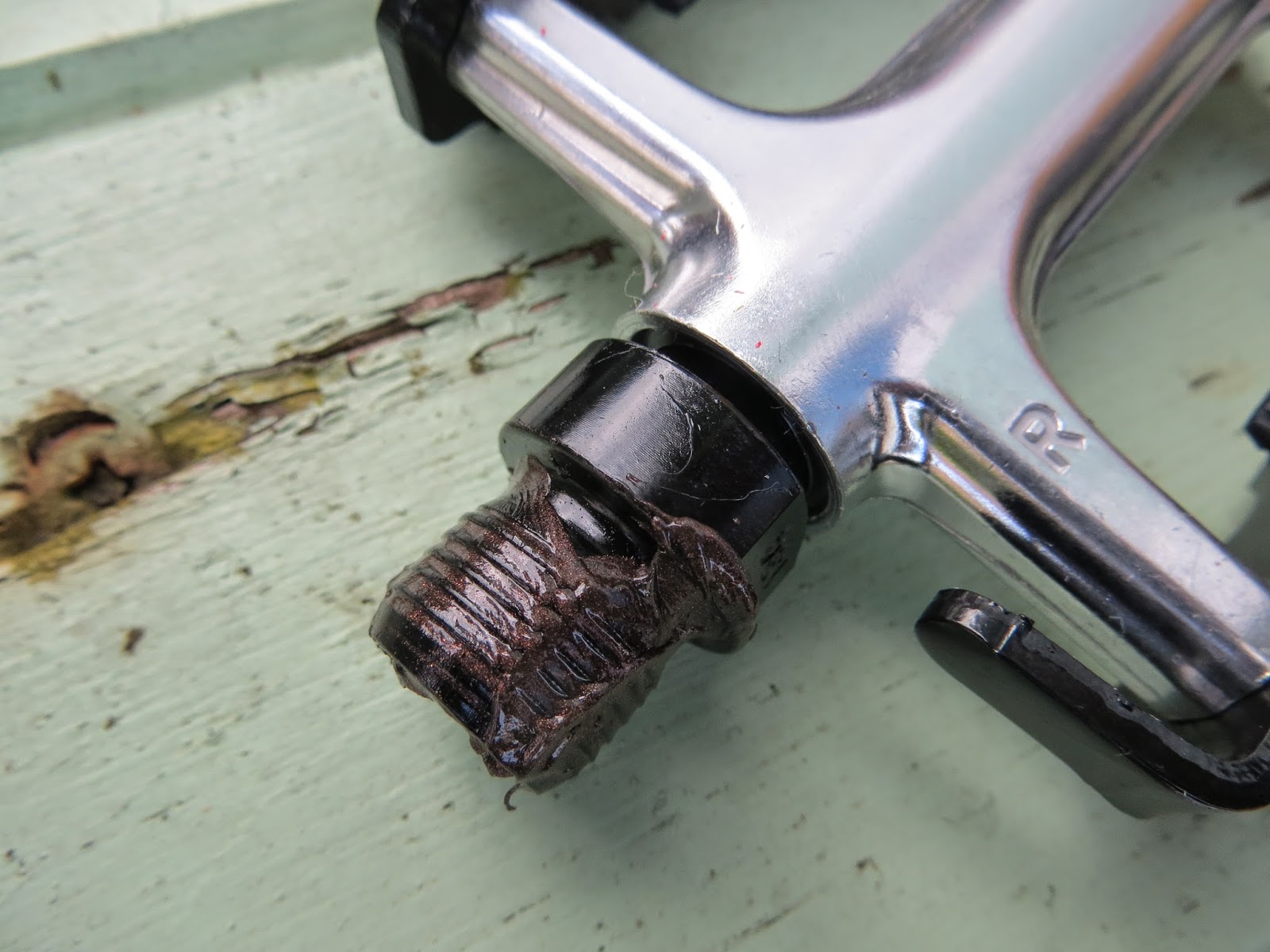 Before fitting the pedals, copper slip the threads otherwise there's a good chance they will be a right sod / impossible to get off when they need changing. 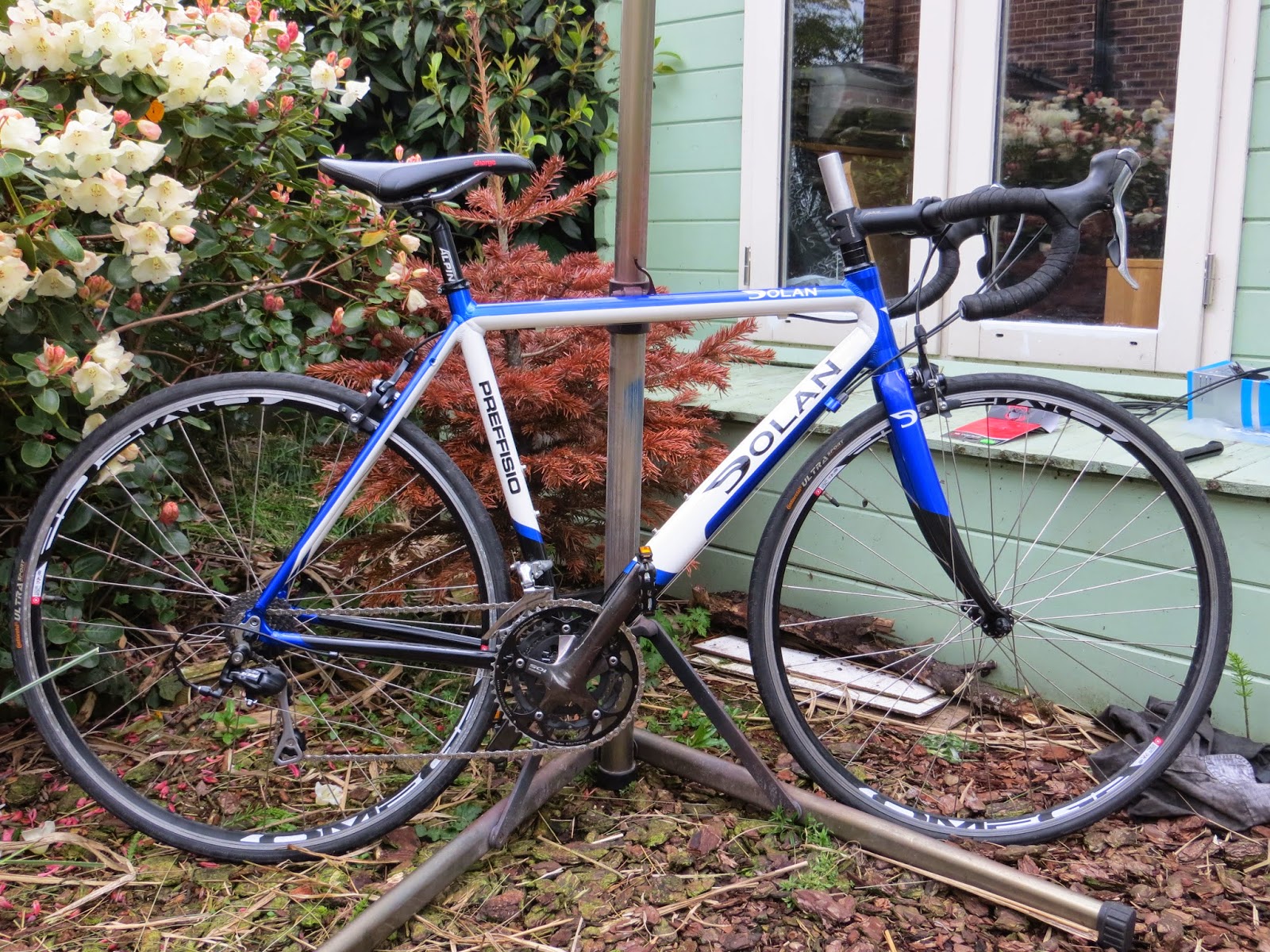 First fix completed - saddle on and chain fitted. The length of the chain was established using the method of wrapping it around the large cogs at each end and then adding a pair of links. It seems a bit shorter than I'd usually do it but has worked so far.

After adjusting the brake and gear cables and aligning the brake blocks she took it for a very quick spin just to make sure that the handlebars were not too low. They're ok, but as expected the stem is a bit too long.

Next step, cut the steering column to length. This is always a nervous stage as there's no undo button. As a precaution I added another 10mm spacer on top of the stem. This was just in case the bars needed to be raised after a longer ride and also to allow for the small possibility that the final stem had a greater stack height. The latter is very doubtful and the former unlikely but you can cut metal off a lot easier than you can add it on. 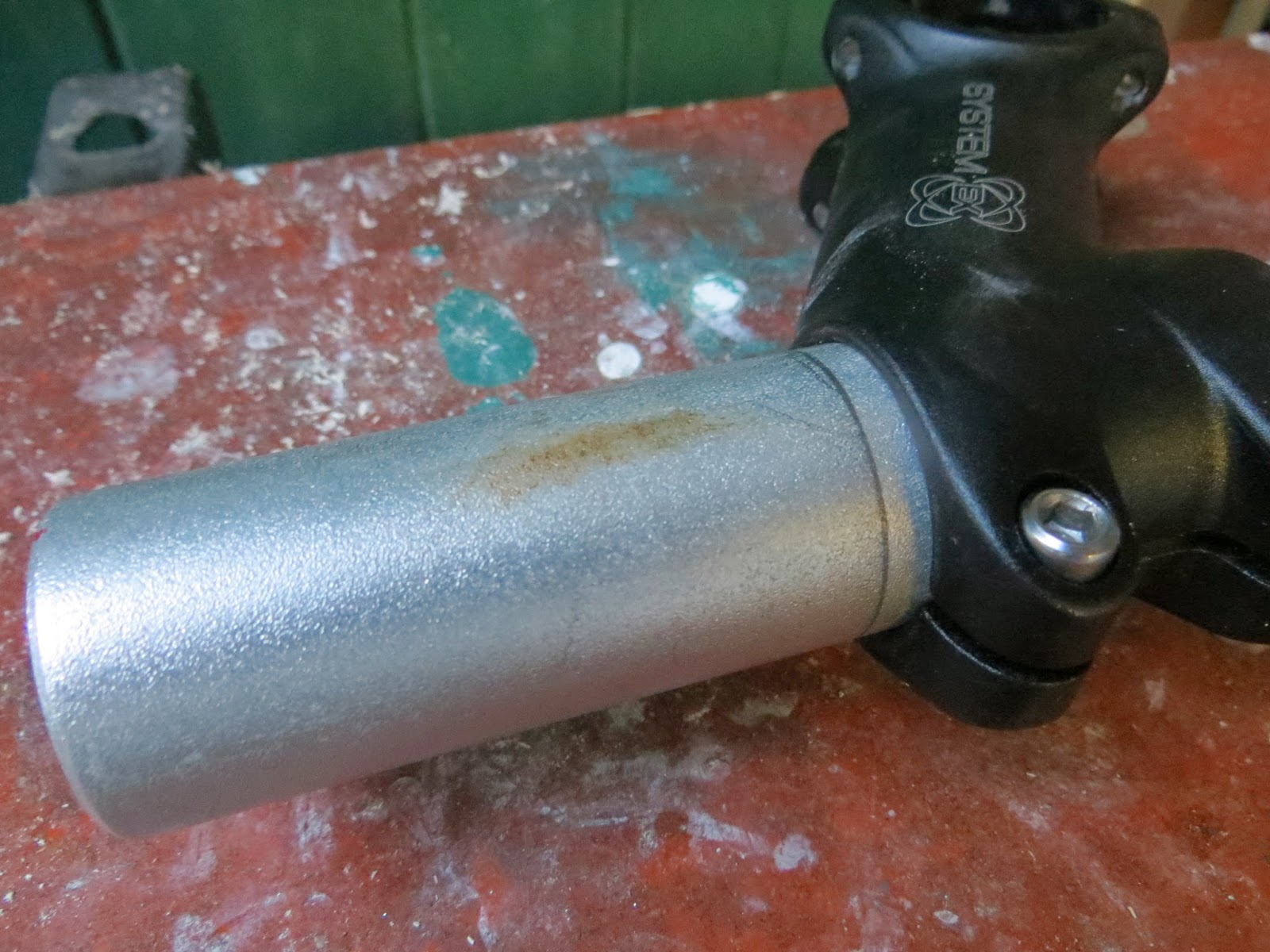 The first line was drawn with the fork still in the bike and used the additional spacer as its guide. The stem needs to be 2-3mm below the top of the stack to allow space for the top cap to compress the stack. A spare stem has been temporarily fitted 3mm below the original line for the simple purpose of drawing the actual cutting line. 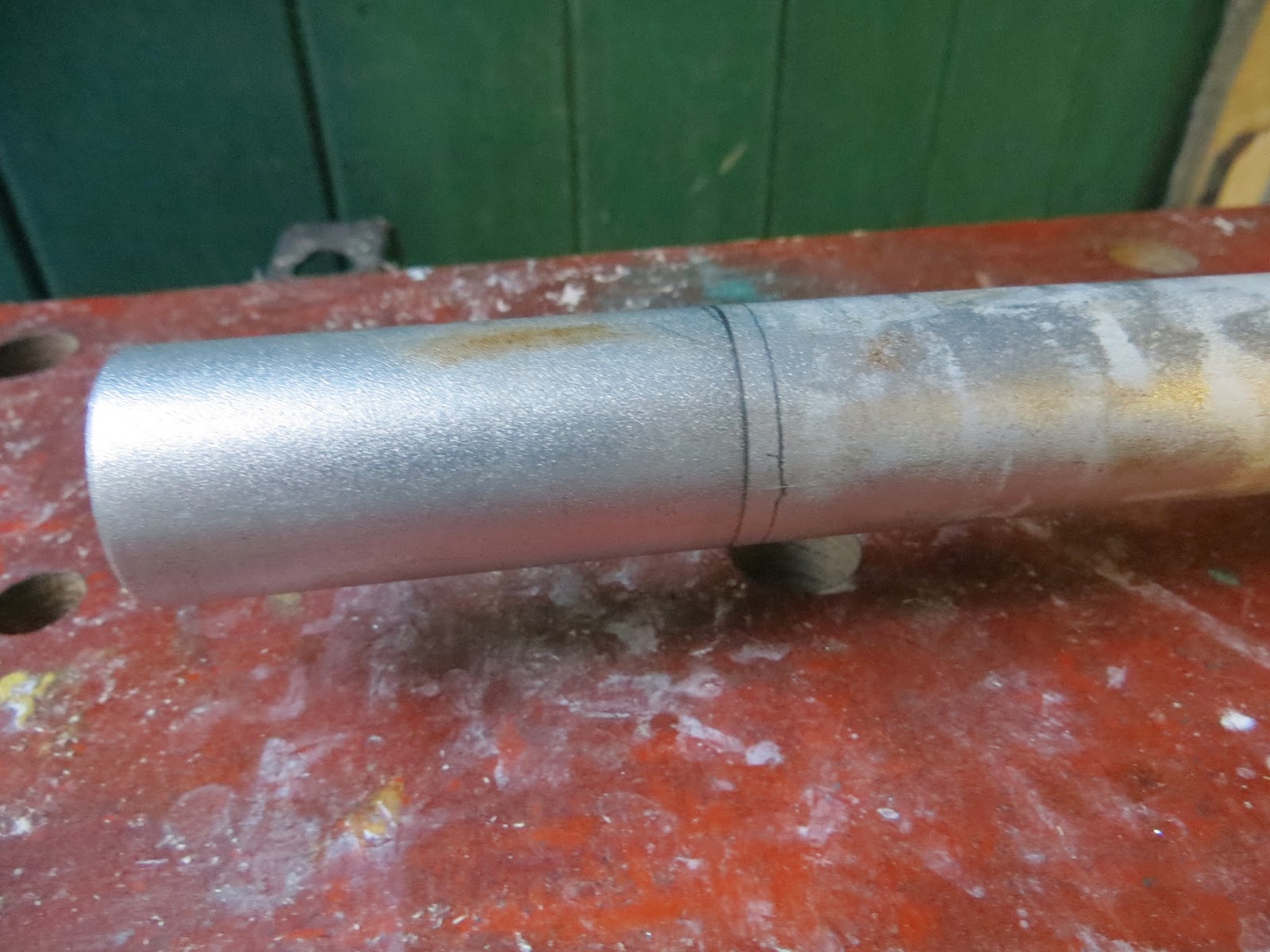 The excess is carefully cut off with a hacksaw. A sharp blade makes it much easier. The end and edges are then finished off with a file so that there is nothing sharp to interfere with fittings. 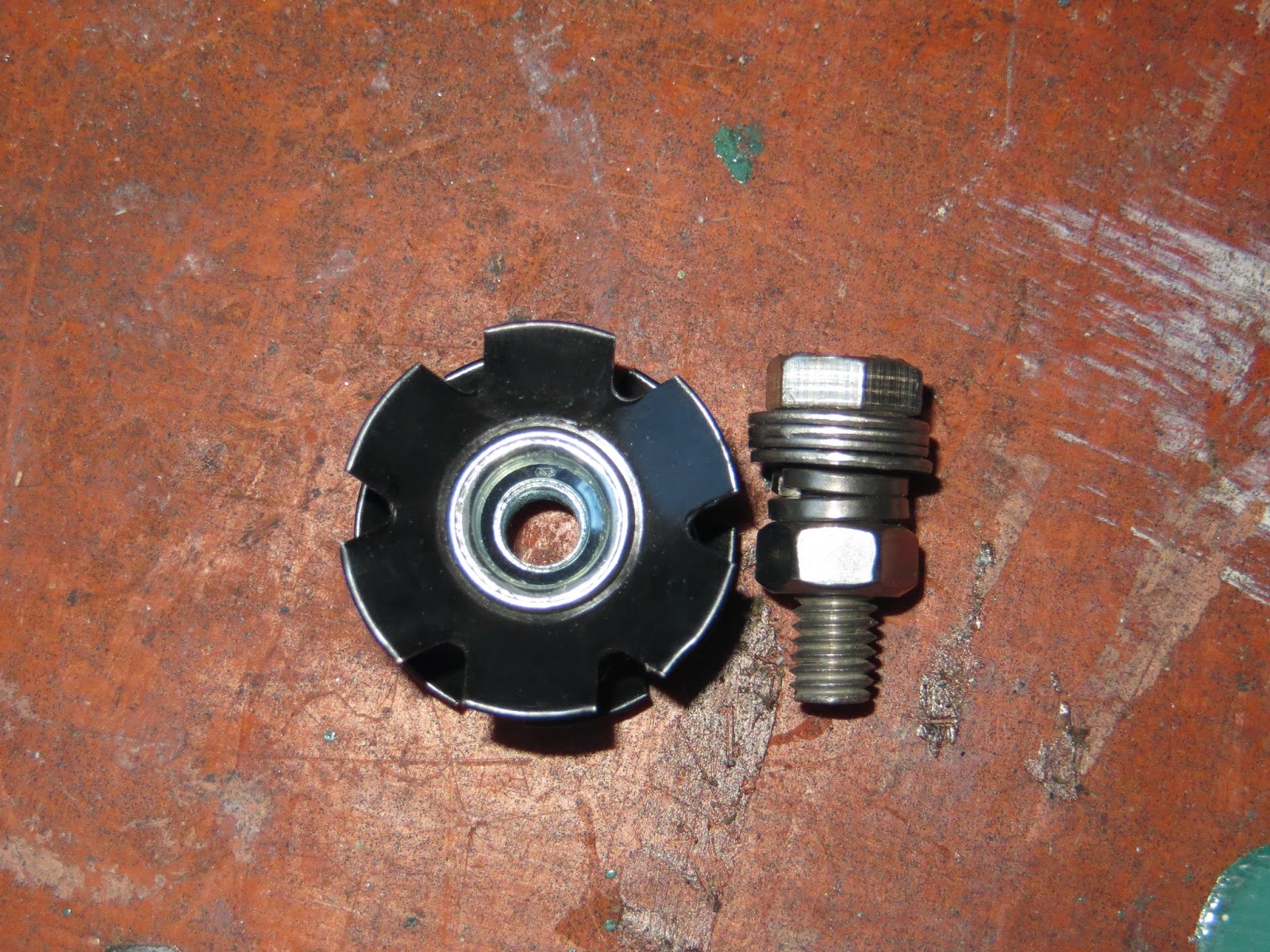 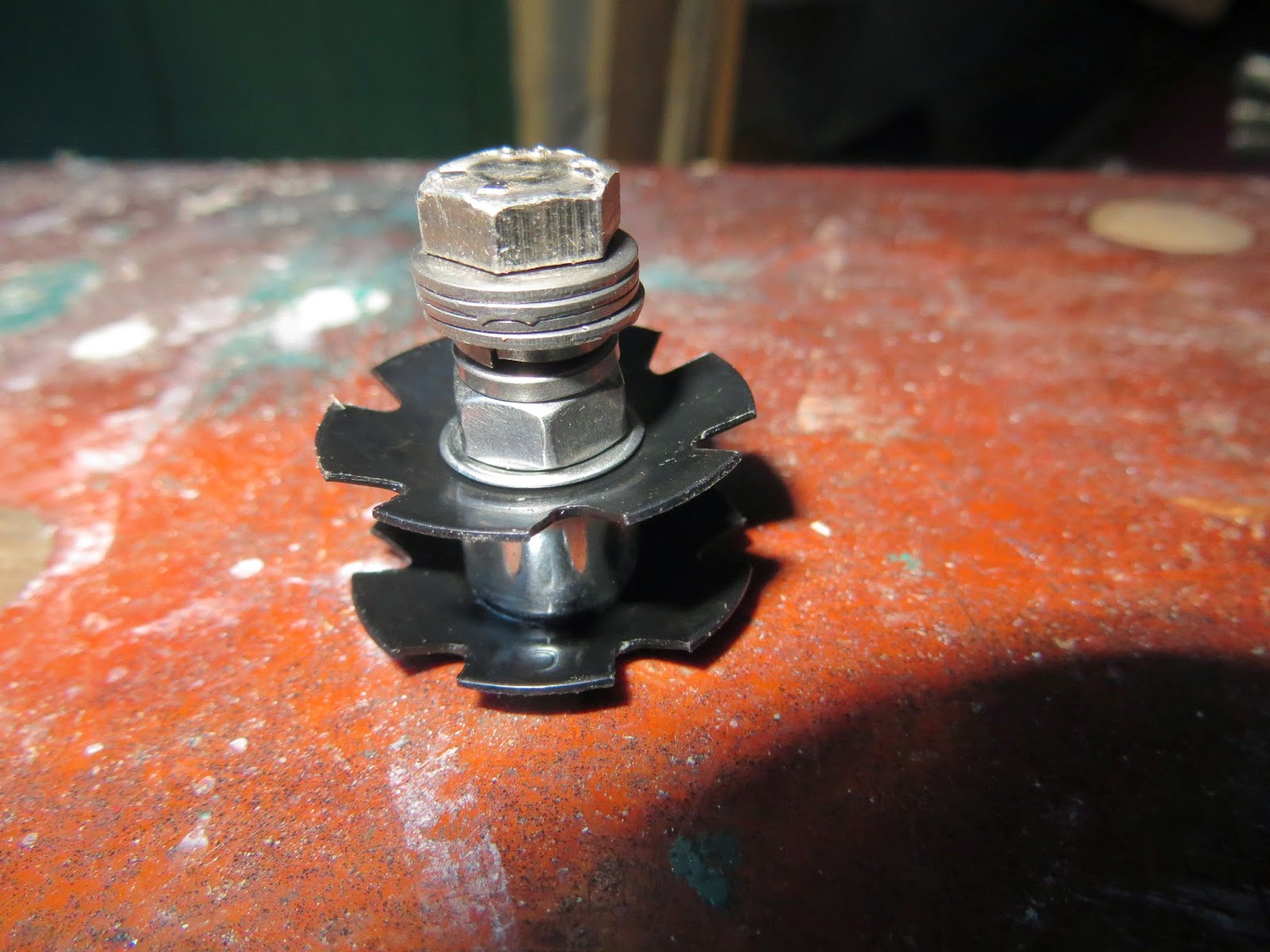 I've always fitted the star nut that the top cap screws into by fitting a 6mm bolt with nut and washers into it and then whacking it into the steerer with a hammer. You have to make sure that it goes in pretty much square. In the past I've not had much problem but this time it just wouldn't behave. It took a second star nut before I got it in anywhere near square. I think I'll be buying a proper tool before I tackle another one. 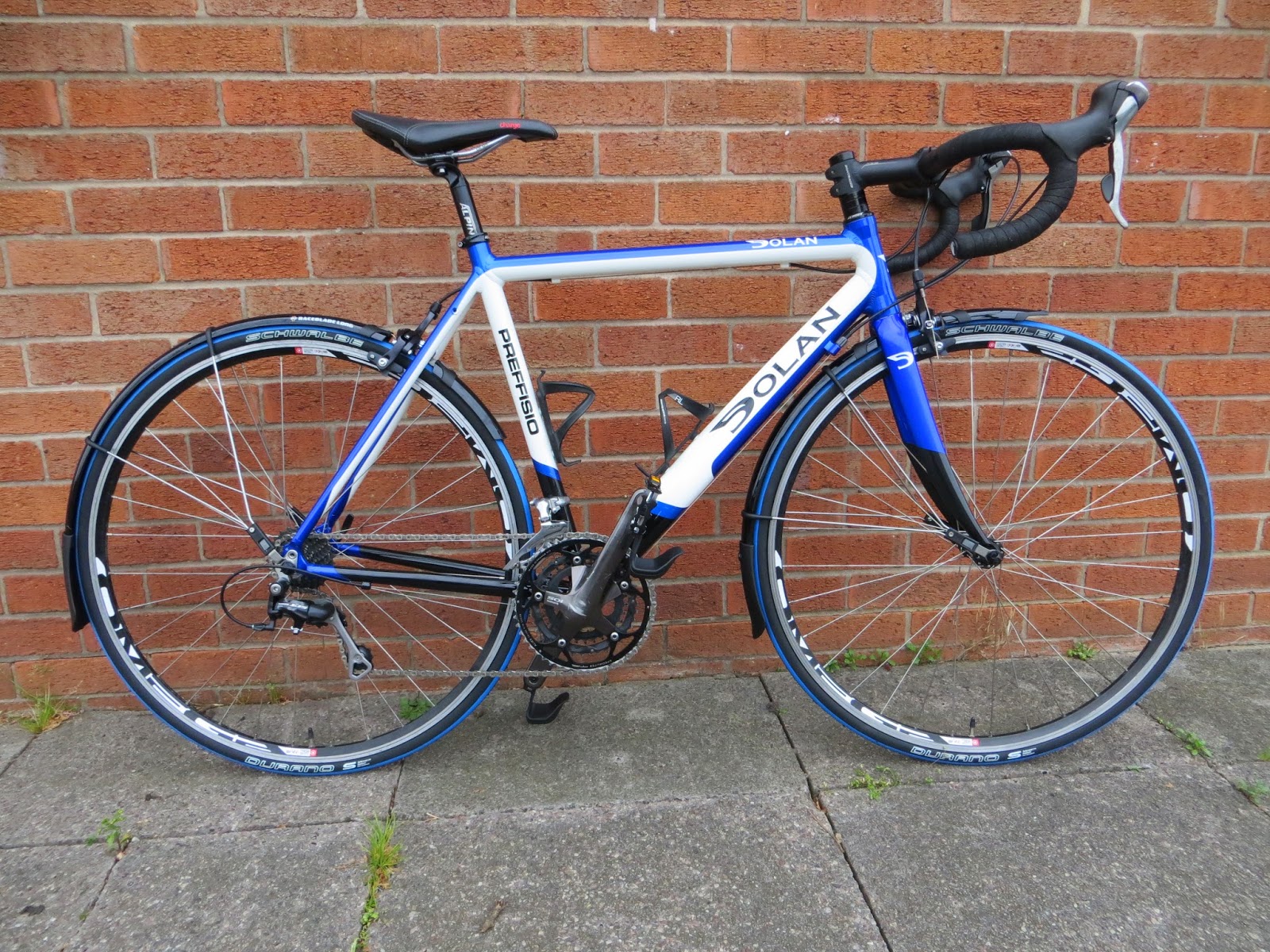 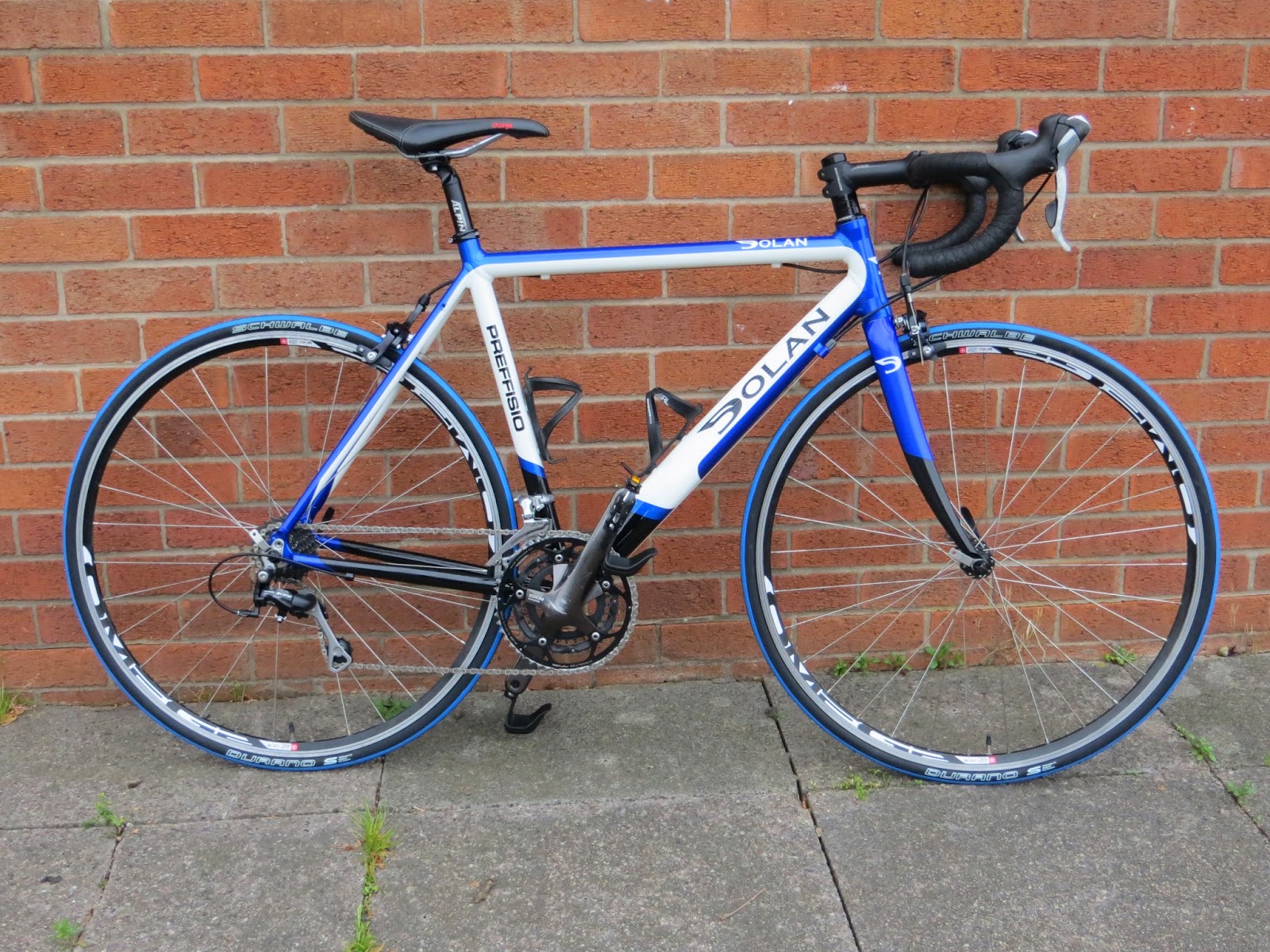 With the stem cut to length and the front end refitted Emily has taken her first lessons in bike maintenance by changing the Continental UltraSport tyres for the better quality Schwalbe Durano S which also happen to come with a pair of blue stripes which set the bike off nicely. Bottle cages have been fitted along with a pair of SKS Race Blade Long mudguards. The frame will take proper mudguards and these will be fitted during the winter months but the raceblades enable the bike to run either with or without them in a couple of minutes. This will be ideal for our typical changeable summers and mean that the bike isn't for fair weather only.