A further continuation of my journey to work and a review of the cycle facilities found on the way.  The previous two posts covered parts in Trafford :


Hopefully having survived exiting the Bridgewater Way I cross from Trafford to Salford over the Manchester Ship Canal via the rather narrow Barton Swing Bridge.  A lot of cars take very little notice of how narrow this bridge is and certainly don't reduce their speed appropriately.  It's quite pleasing when two buses or lorries use the bridge in opposing directions as they force all of the traffic to slow down.

There are no cycle facilities for about half a mile as you ride parallel to the Bridgewater Canal along Barton Road.  This means that you have to hold your own amongst the traffic in the narrow section of road as you pull away up hill from the lights at Peel Green Lane.  If you don't take Primary position here the cars and vans will push past you even if there are cars queueing for the lights on the other side of the road.

This section of the tow path is due for upgrading next year, 2015, but it won't provide an alternative to fighting with the traffic away from the lights as there is no tow path on the canal swing bridge.

Just before the junction with Liverpool Road there is an entrance down onto the canal tow path. 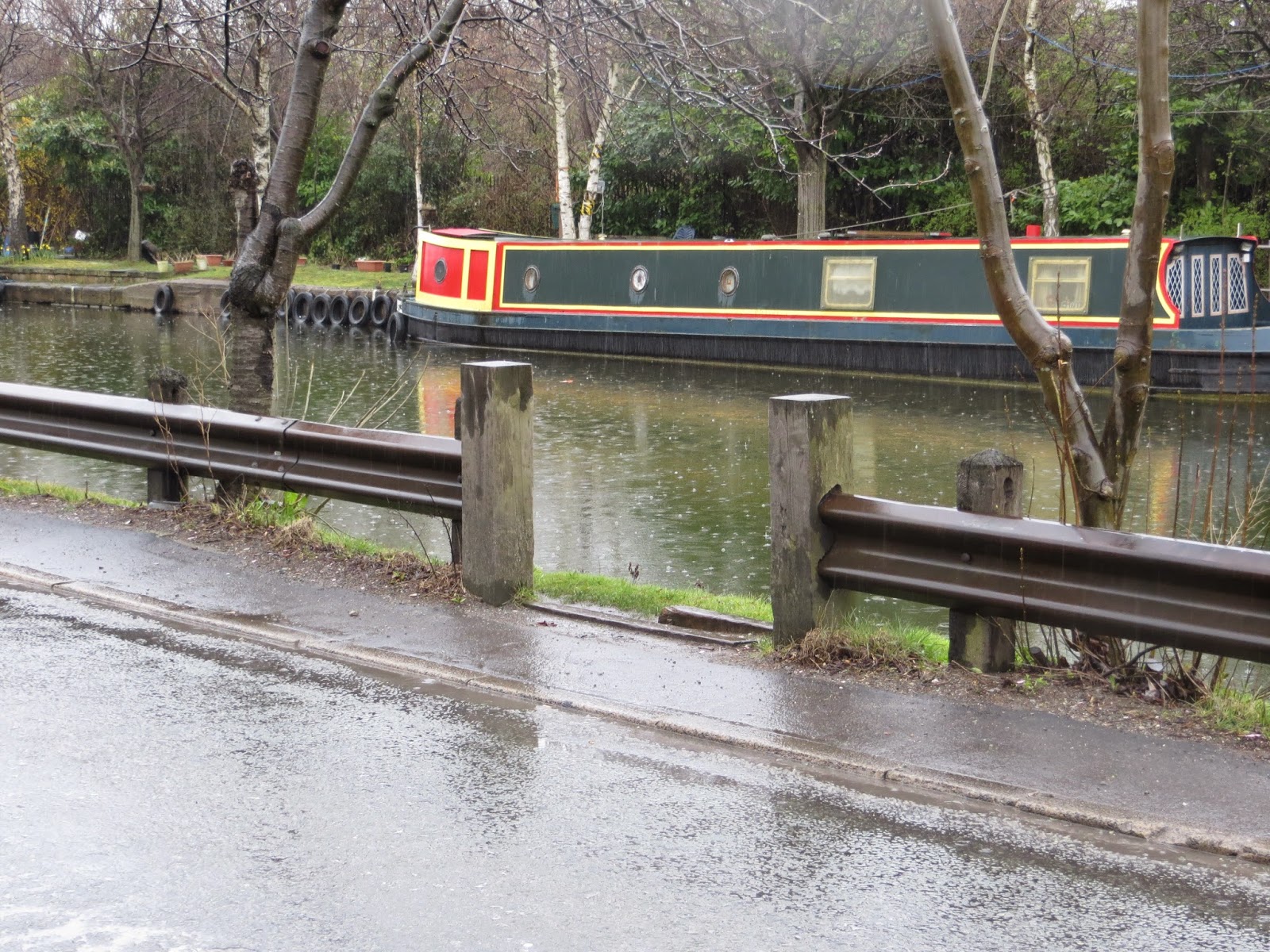 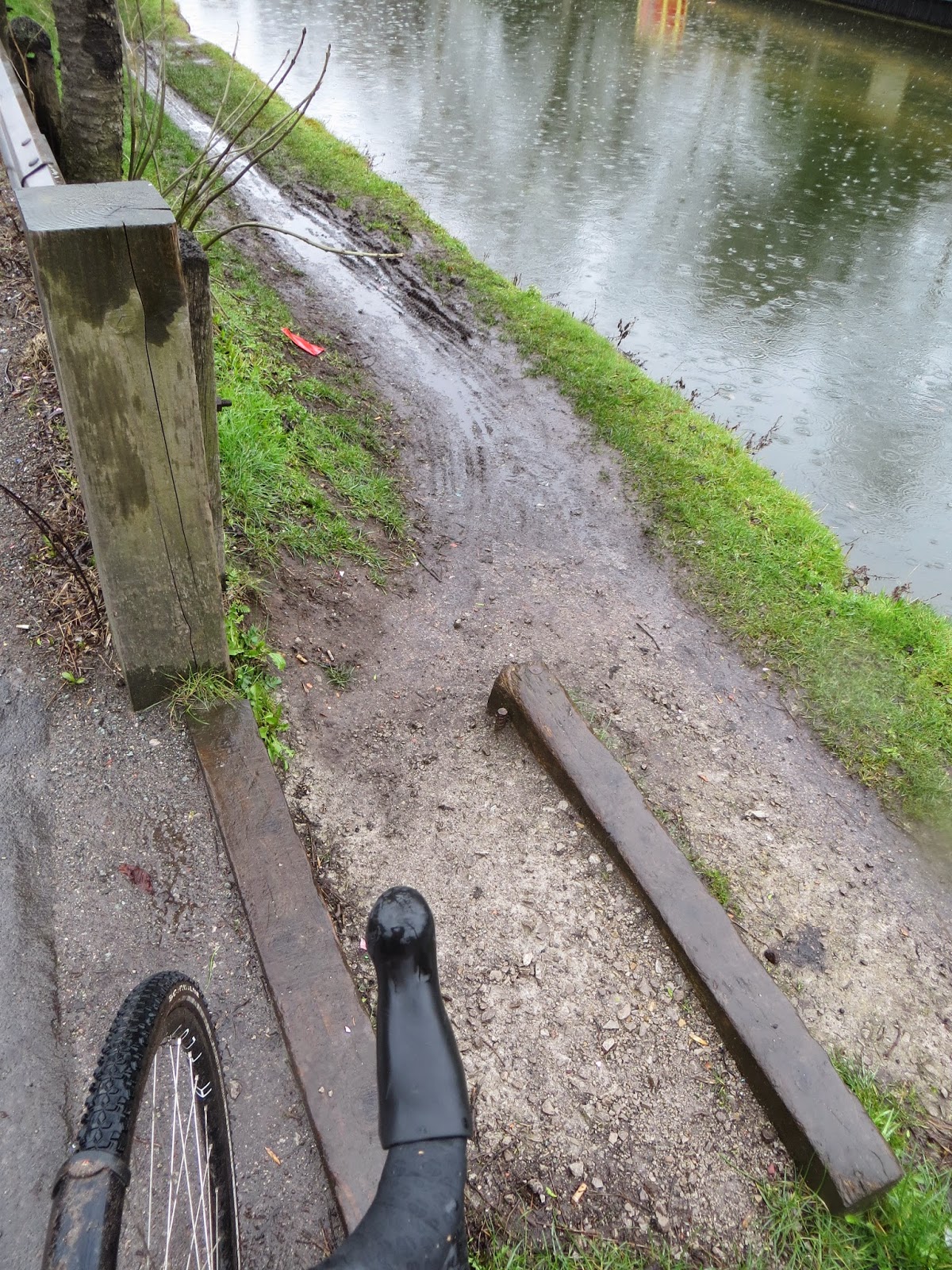 Be careful here, those wooden 'steps' are very slippery when wet, tyres and SPDs have been known to go sideways.  Definitely room for improving cycle access at this point. 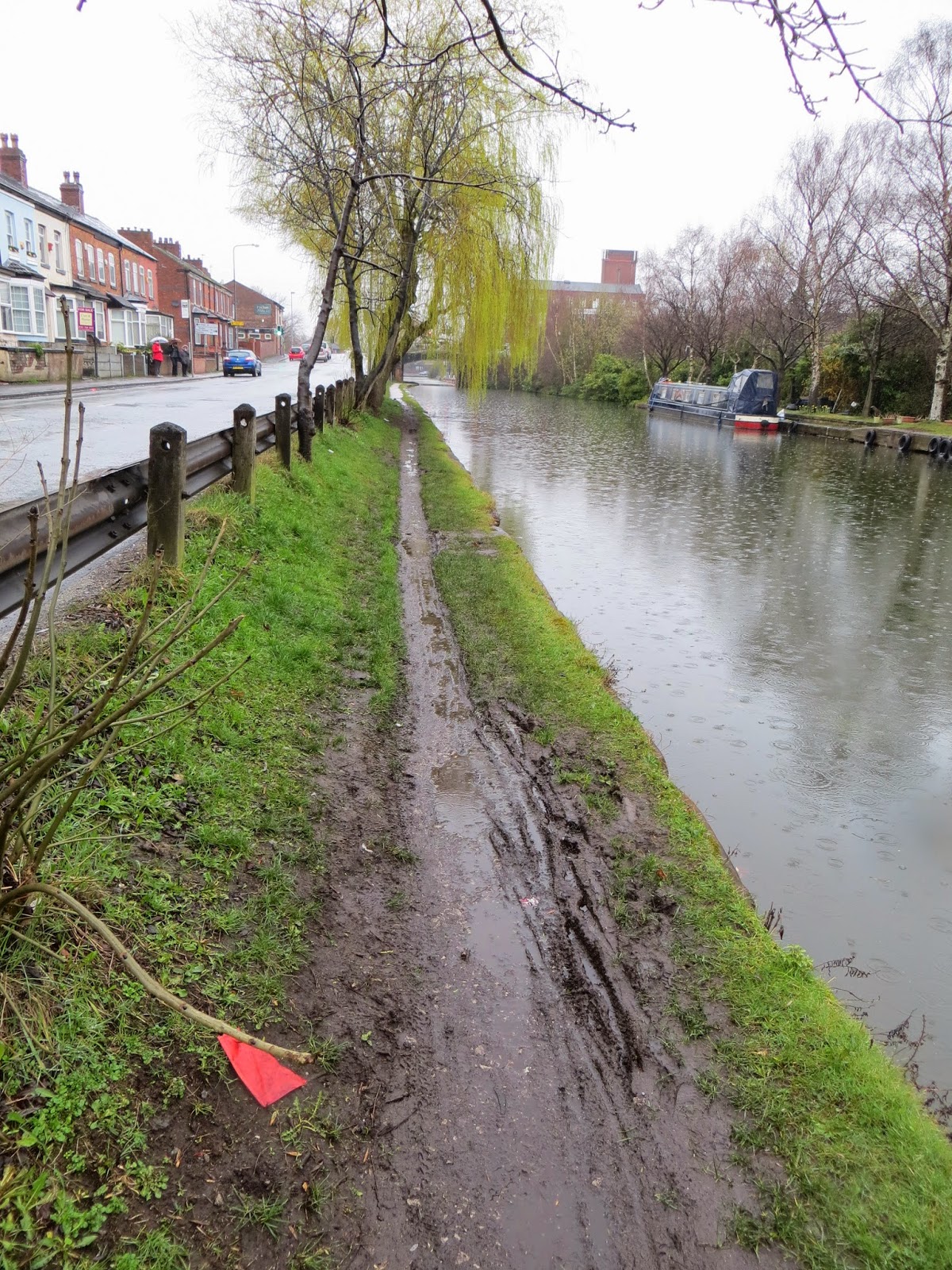 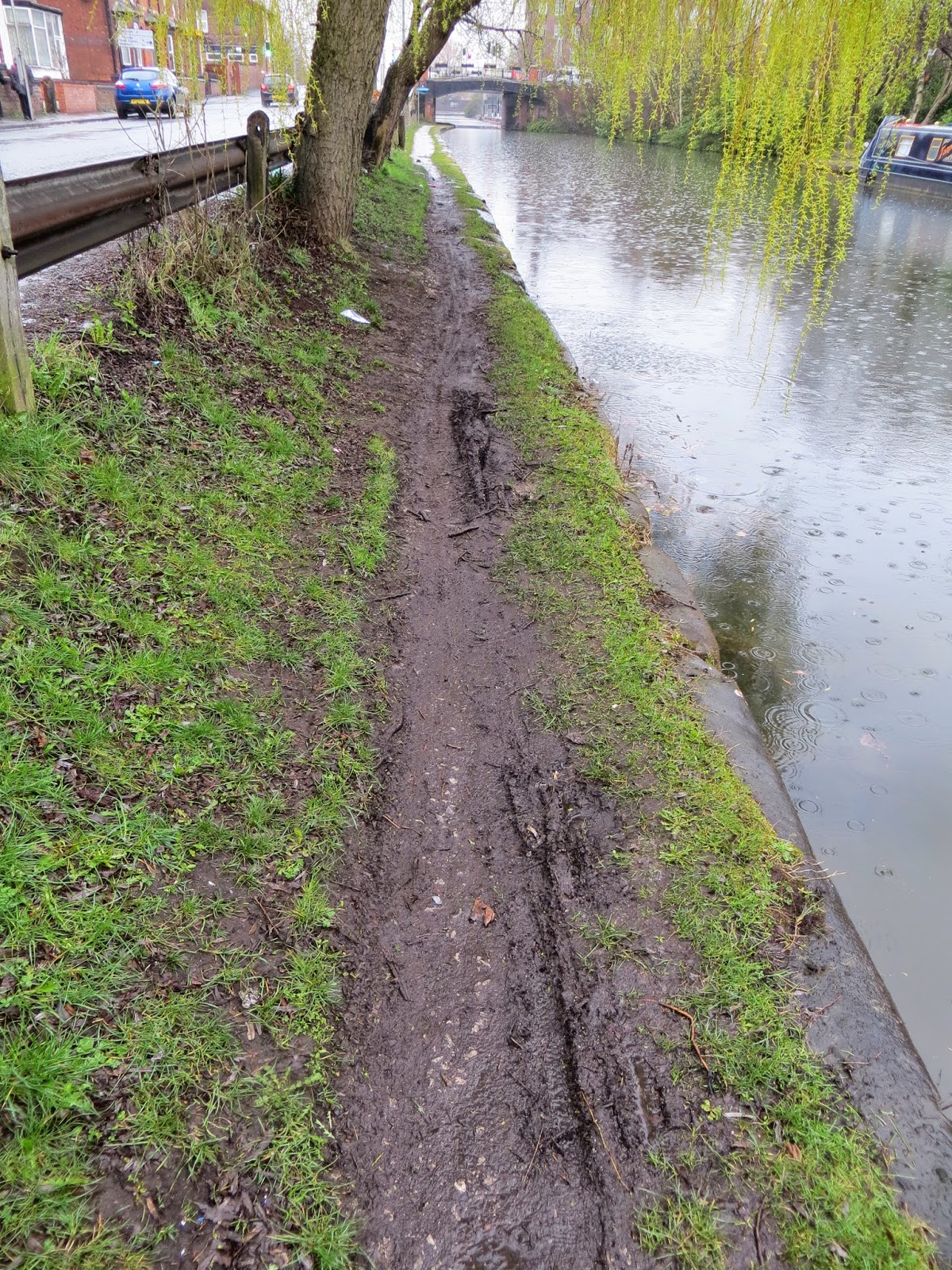 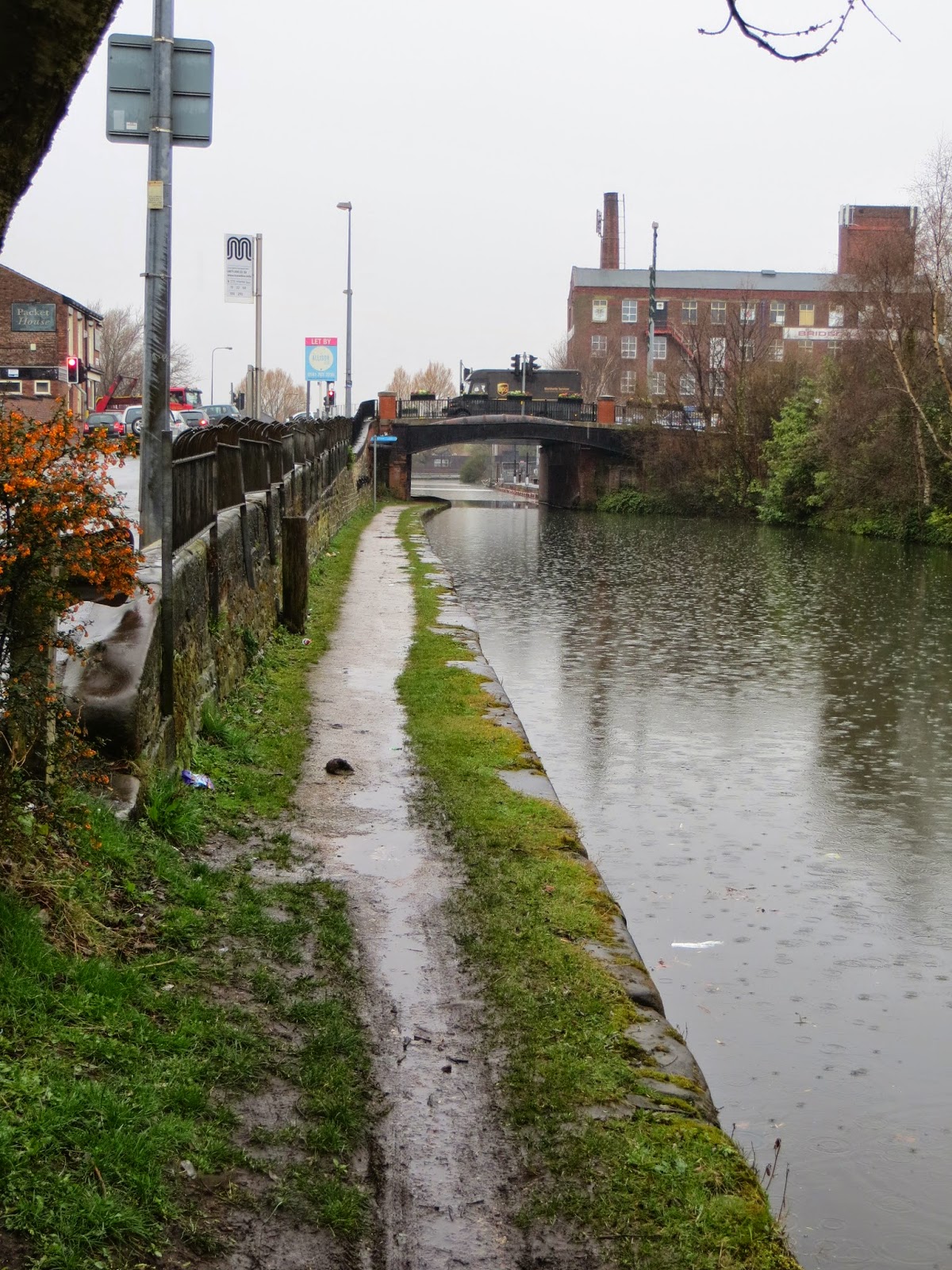 You'll notice from the photos that the tow path has actually not yet been upgraded at the point you can access it from the road.  You have to negotiate about fifty feet of muddy singletrack to get to the upgraded part.  This is another example of a lack of joined up thinking.  You would have thought that linking the upgraded section to an access point onto the road so that it could actually be used would be sensible.  Instead the nearest direct access on to the path is on the other side of the bridge. 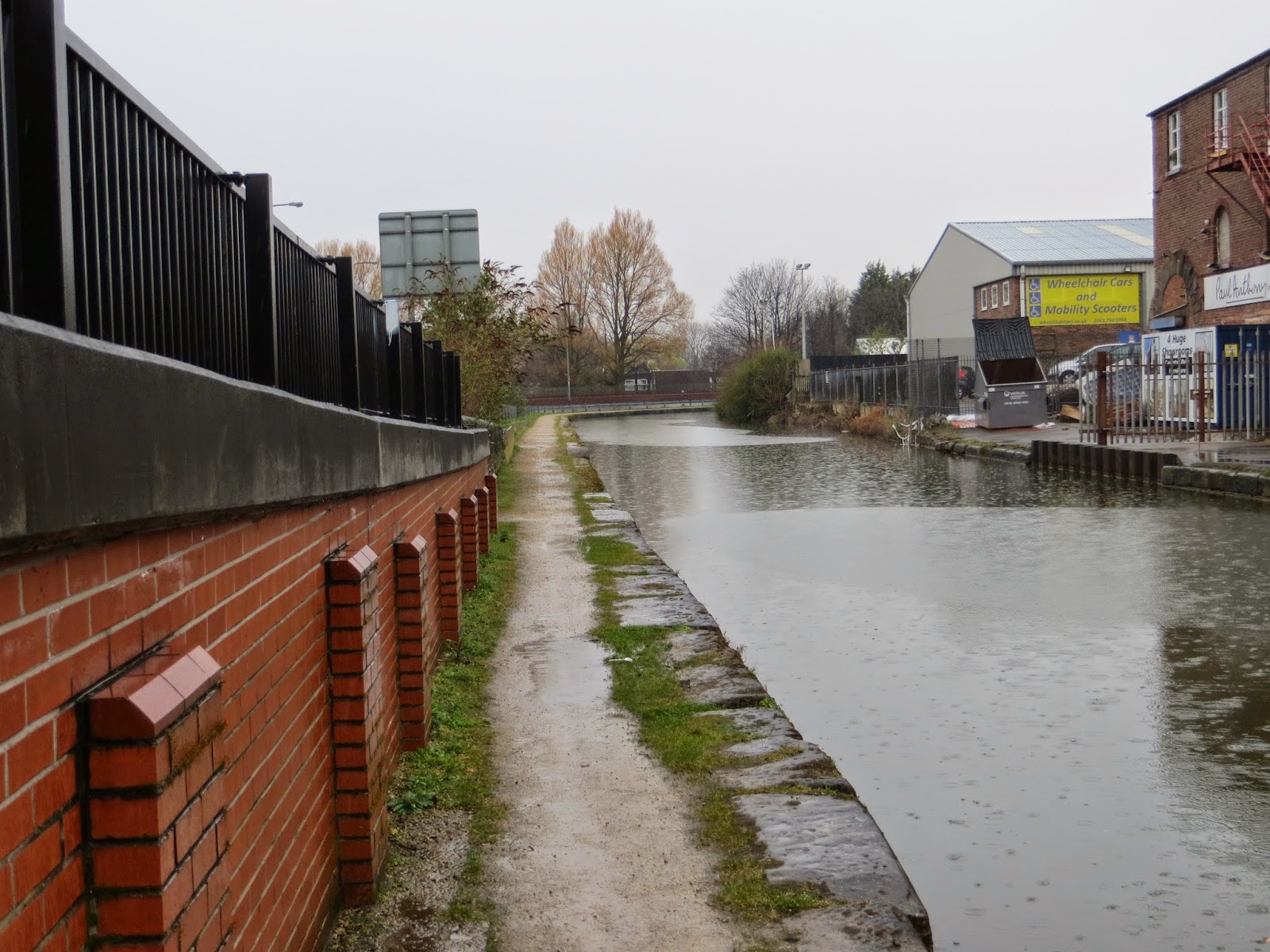 Then around the next bend, yes the one in the distance. 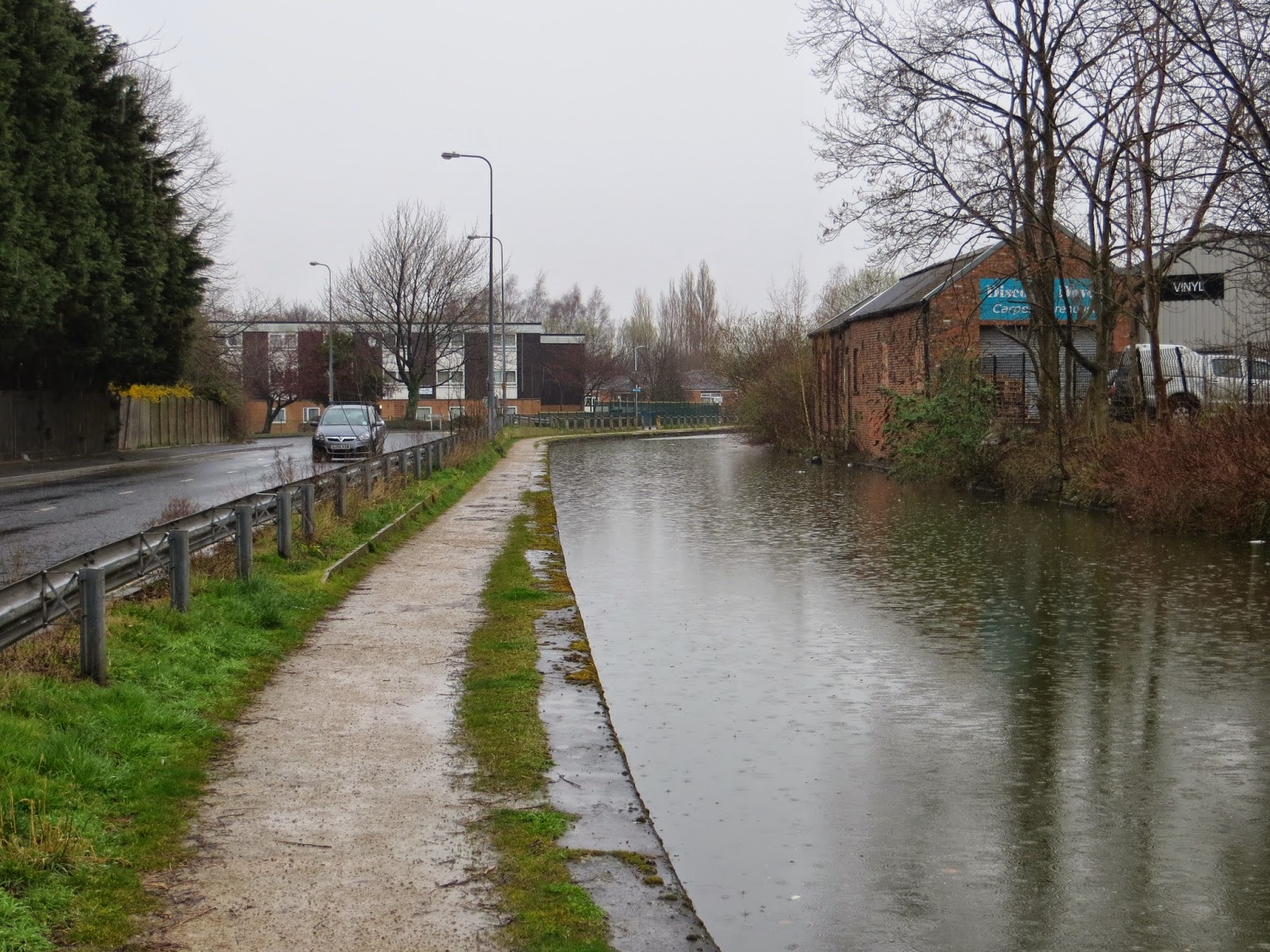 And around the next 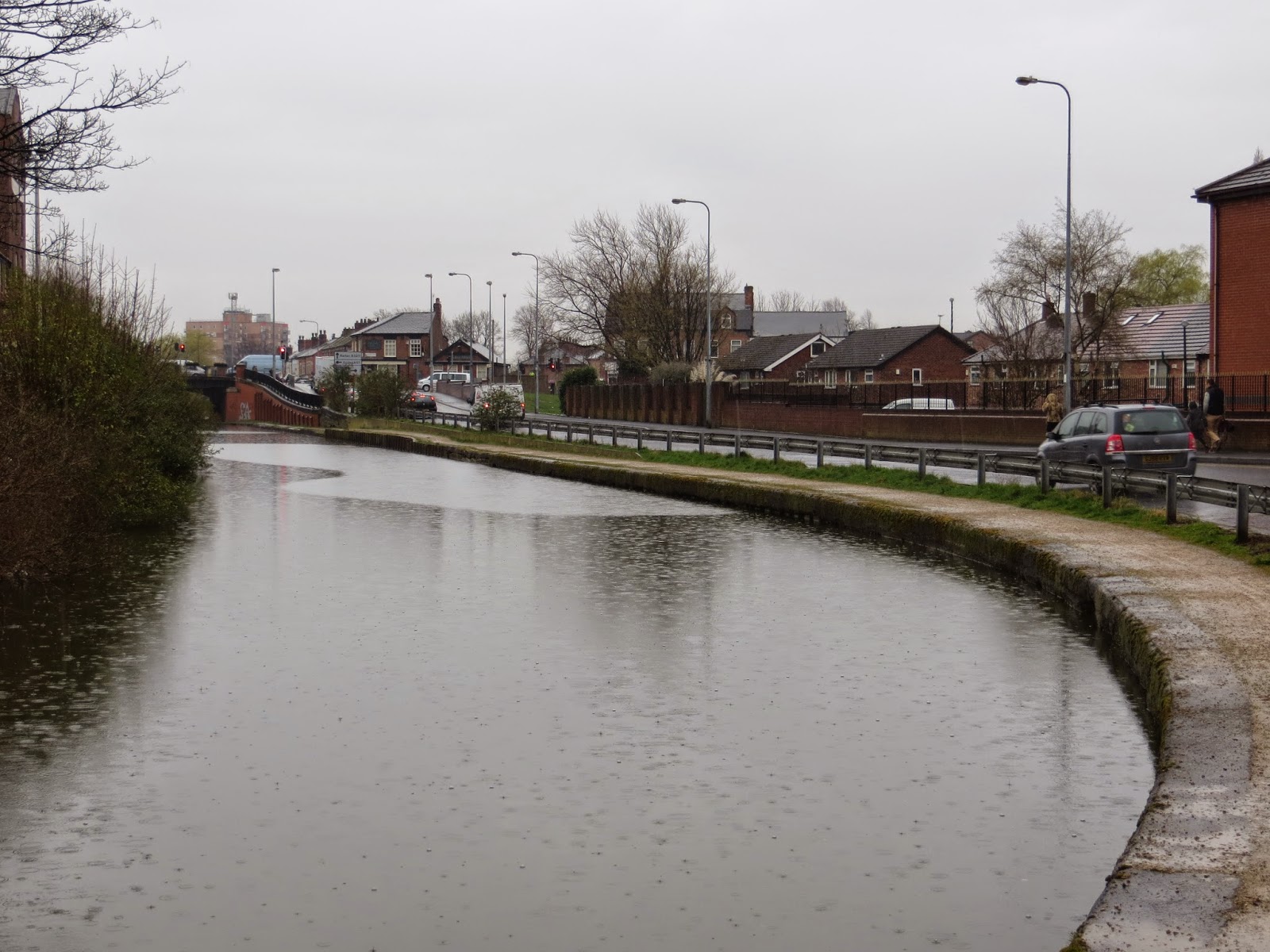 Looking back from the first bend to the bridge. 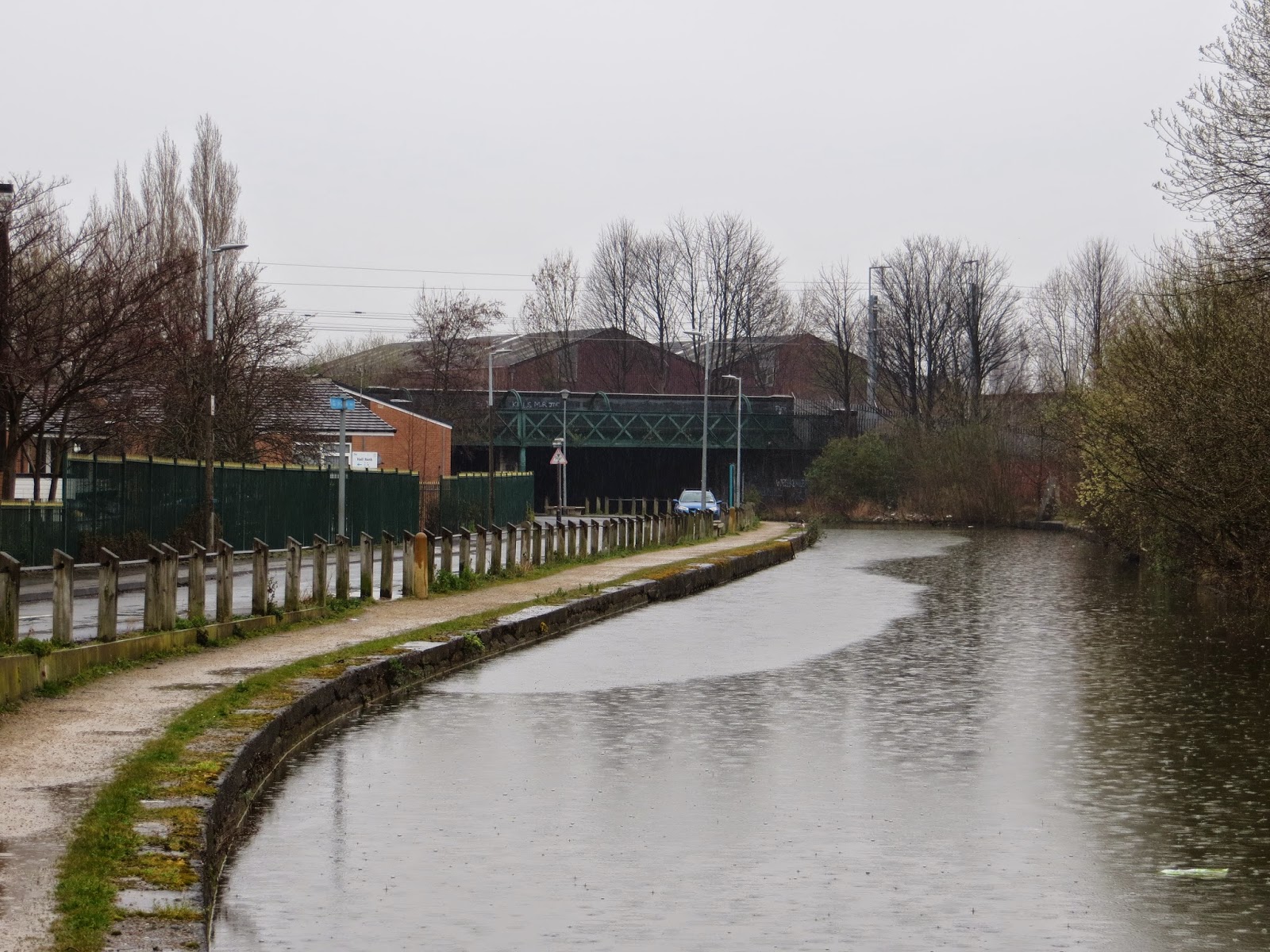 And there it is marked by the light blue direction signs.  That's a long stretch that surely cannot officially be in use as a cycle path as the last fifty feet haven't been upgraded and therefore cycling is not allowed upon it.

The surface of the tow path along here is different to that in elsewhere.  Gone is the lumpy tarmac and pea gravel to be replaced with compacted hard core.  The surface probably isn't as hard wearing but is a massive improvement in comfort and safety. 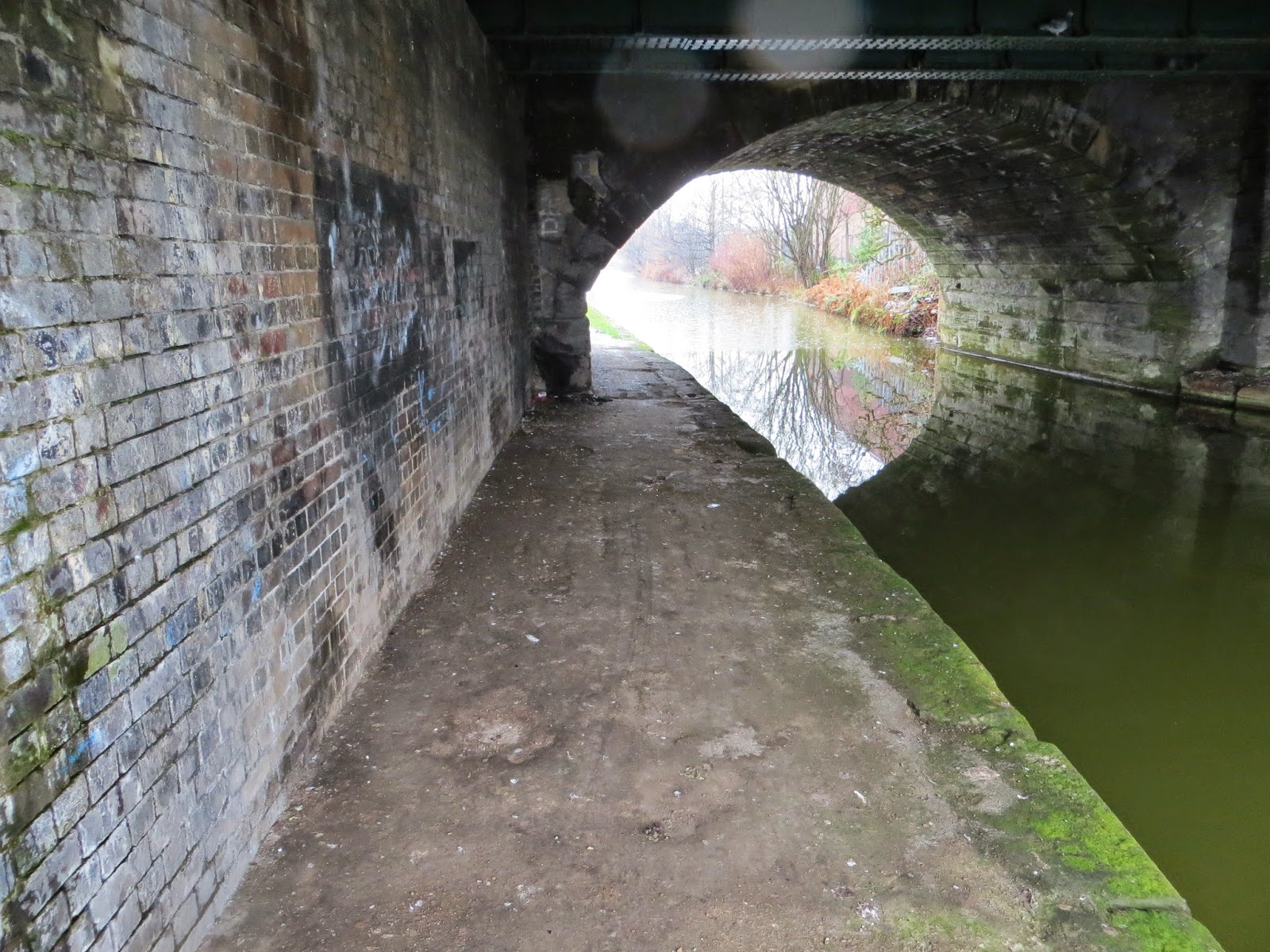 It's not all hunky dory though. The surface under Patricroft railway bridge is quite pitted.  I think this must be another different surface as if it gets wet it is extremely slippery.  Thankfully it's not wet very often. 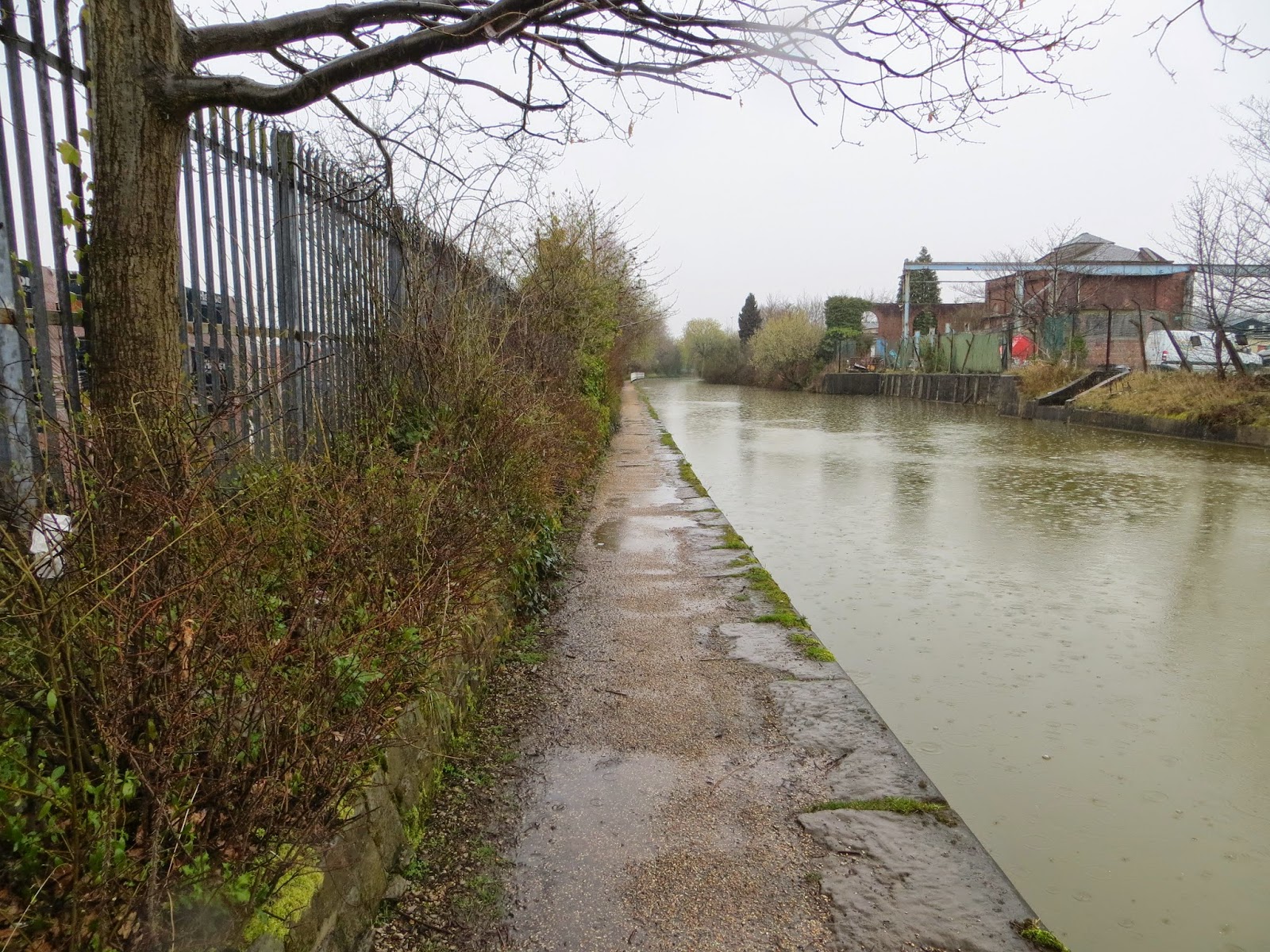 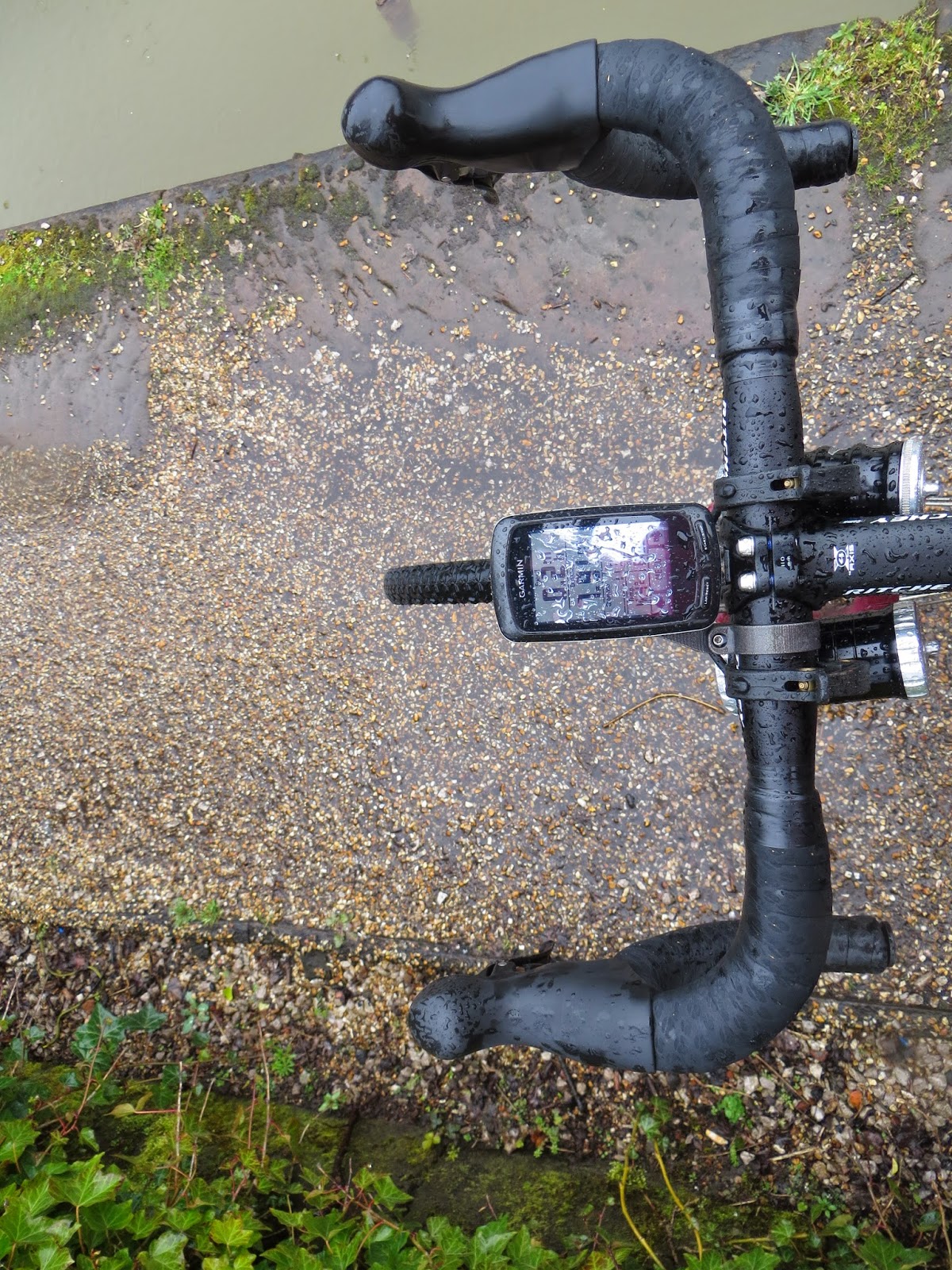 Beyond the railway bridge it's back to lumpy tarmac.  It appears that not a lot of effort went into improving this section to a reasonable standard as no effort has been made to increase the path to an acceptable width. In places it is very narrow, almost to the point that two pedestrians would struggle to pass never mind cyclists. 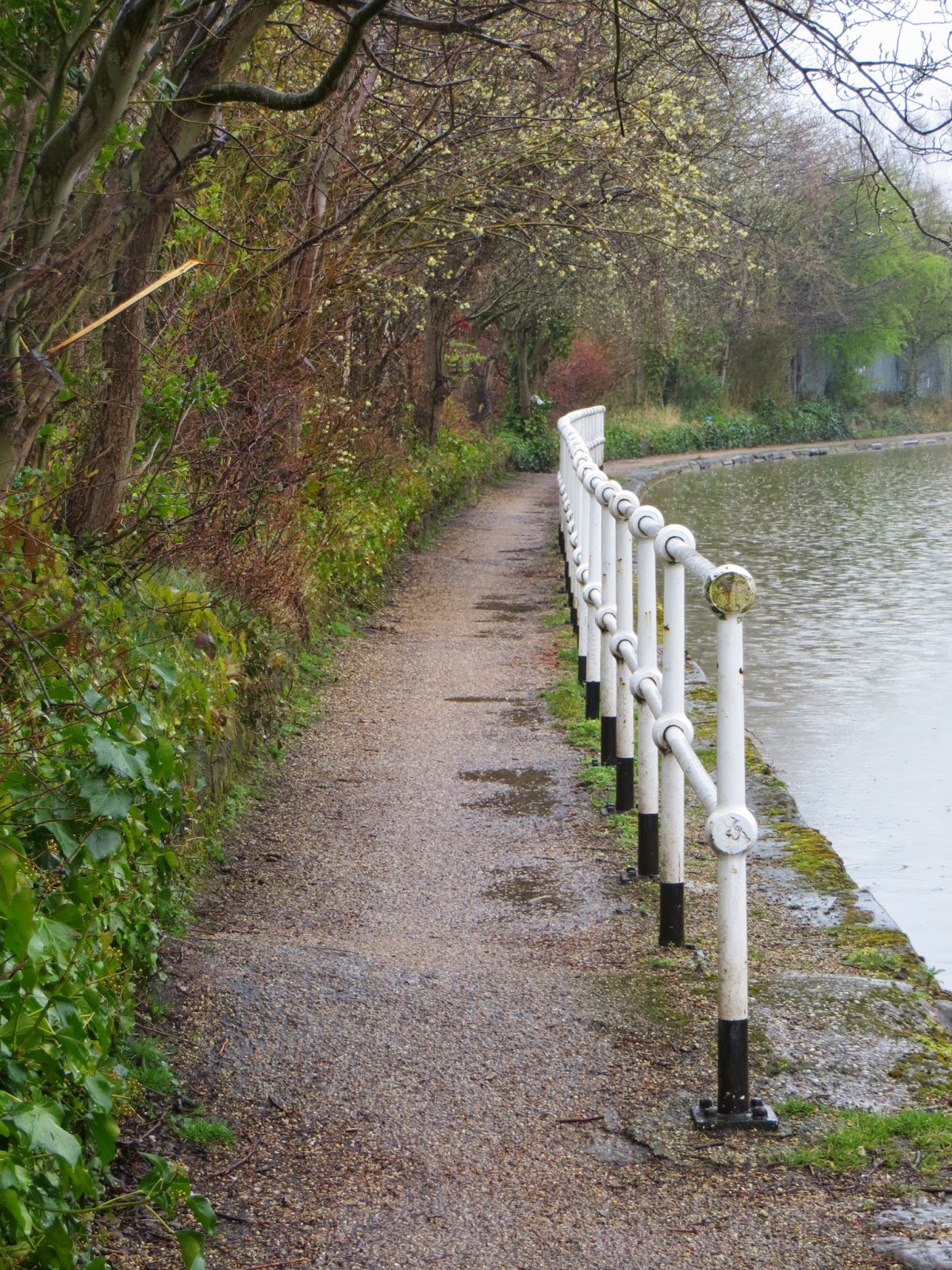 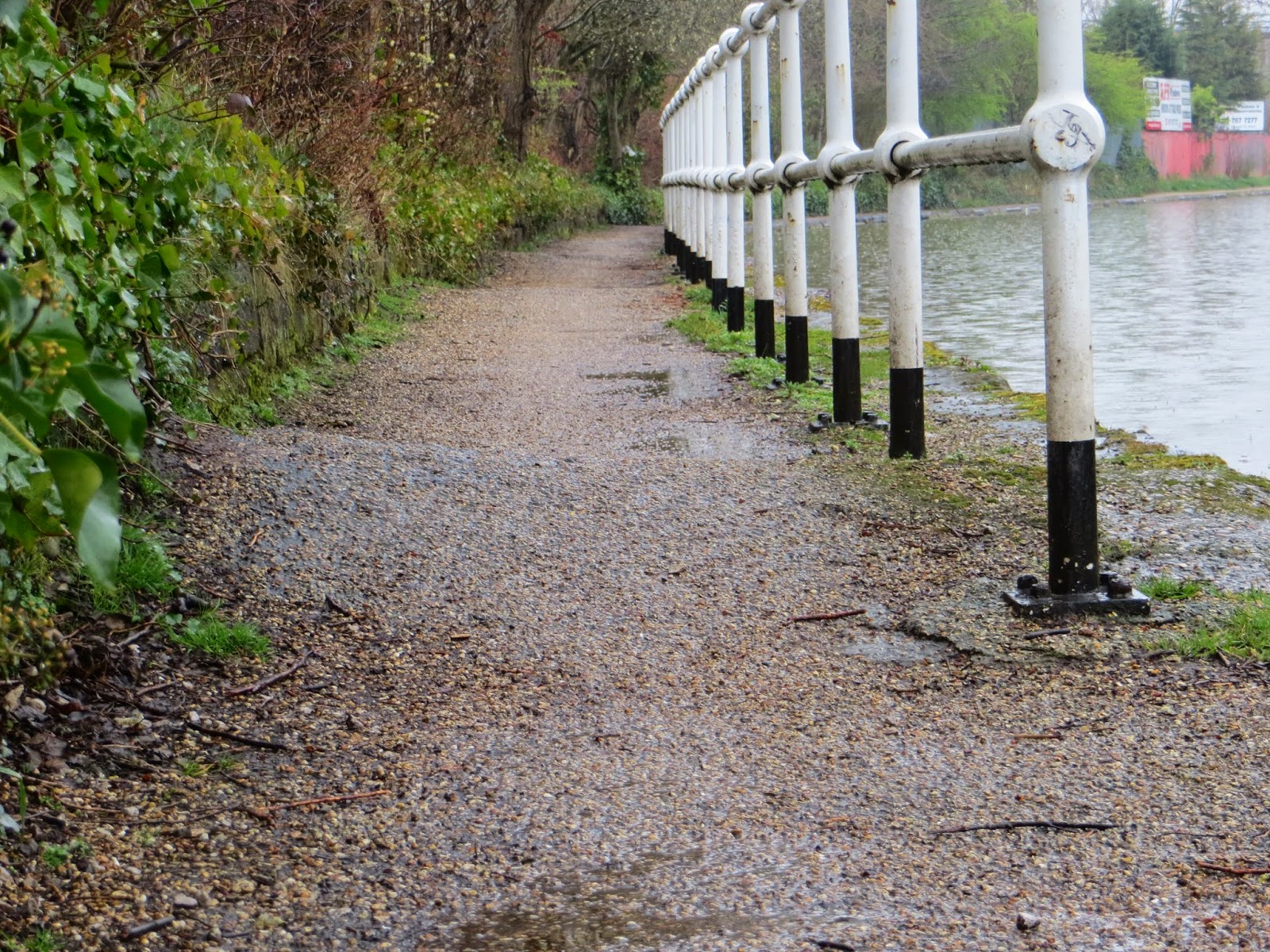 There's a short section, fifty feet, where a guard rail has been added that significantly reduces the width of the path.  The state of the path surface along here is atrocious presumably because of tree roots and is the reason for the guard rail.  If you want to get air then it is very easy to do it here, just don't get it wrong as there's no space to recover - it will hurt.  Time this section wrong, i.e. when somebody has just started walking from the other end and you are in for a long wait as it is not easy to pass mid way along. 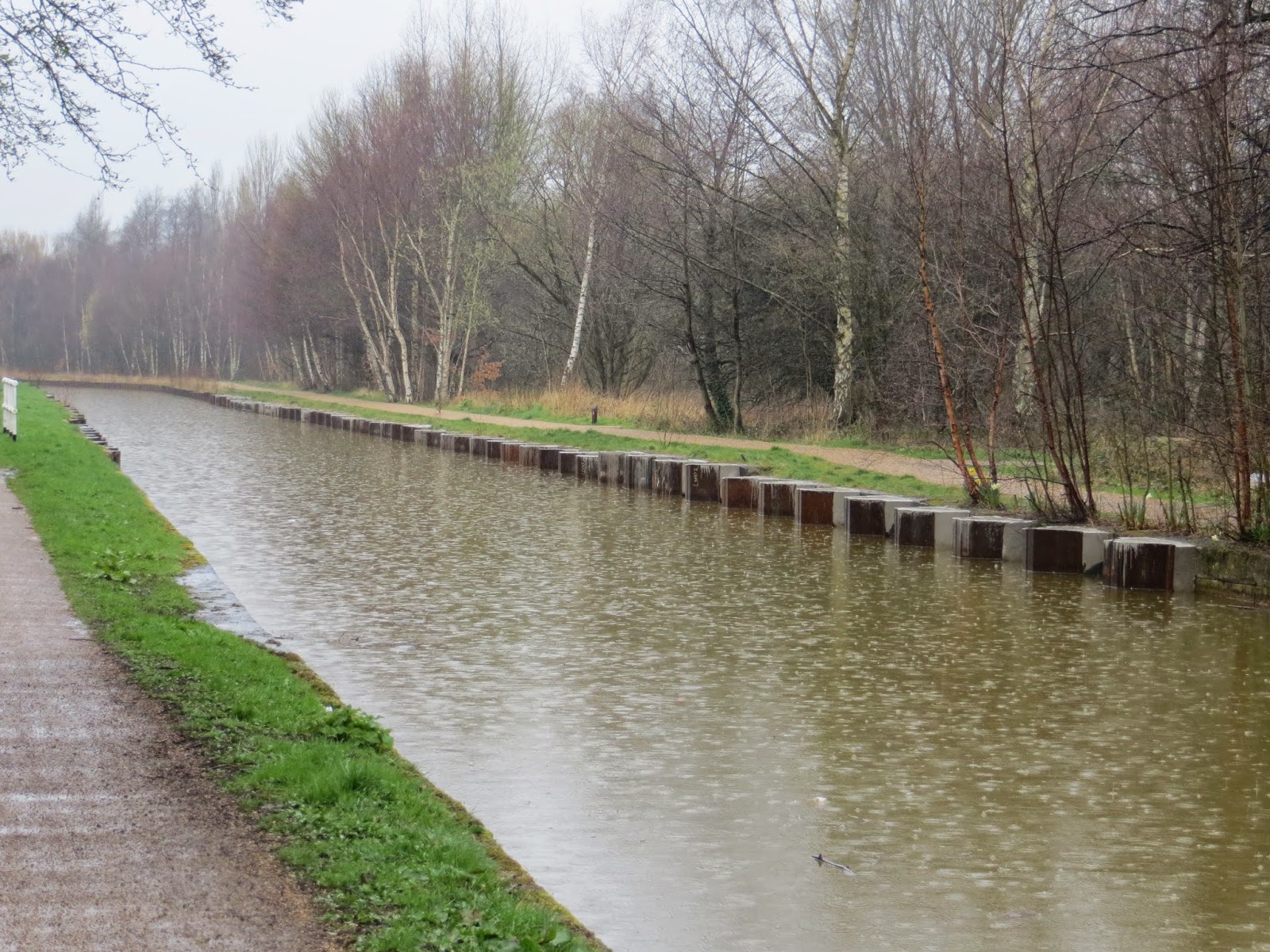 Just under the bridge at Monton they've recently driven this shuttering into the side of the canal.  I hope that this is temporary as it's an ugly hotch potch of levels.

At this point the canal is adjacent to the NCN55 and I change to that for the next part of my journey. 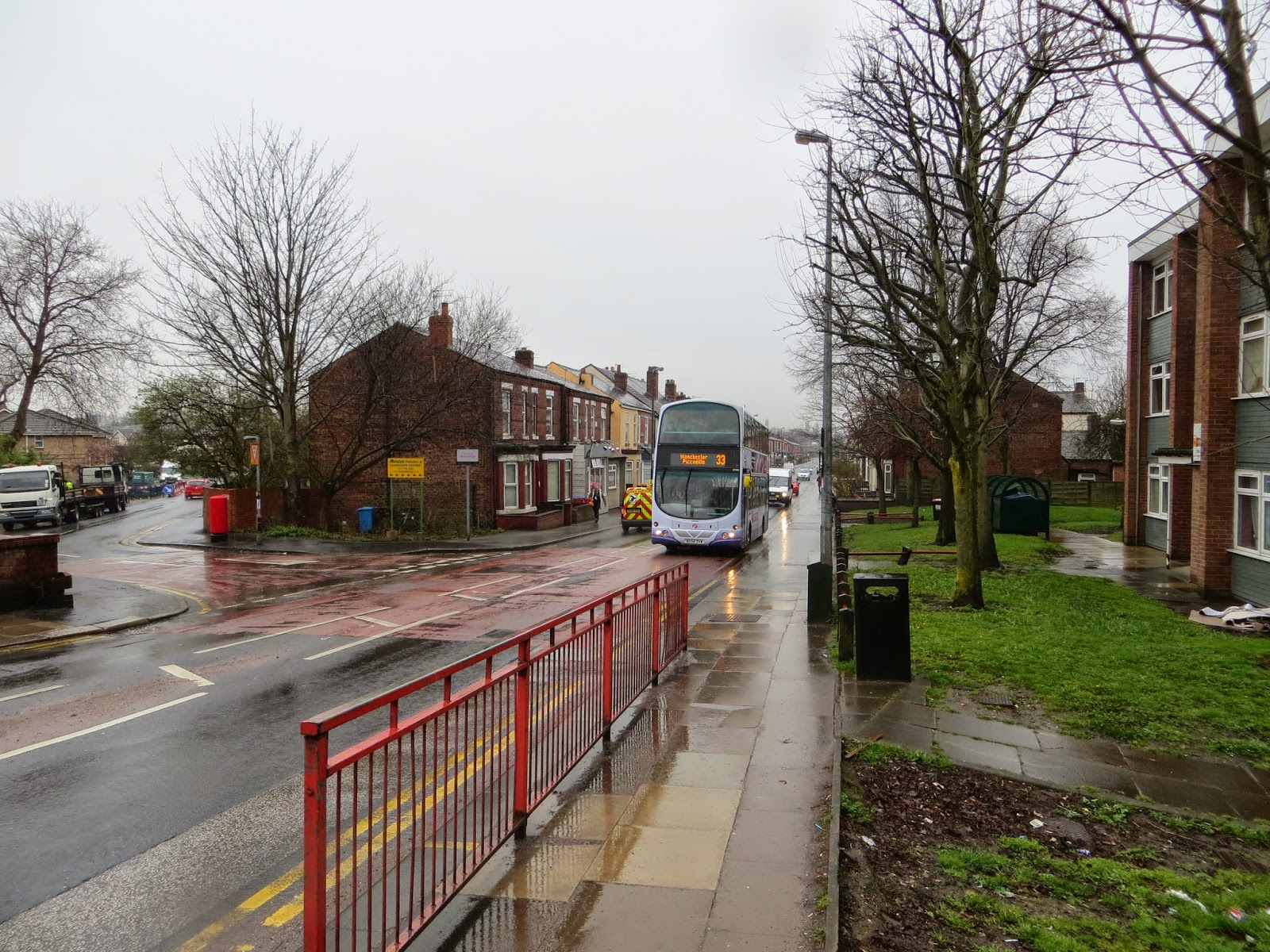 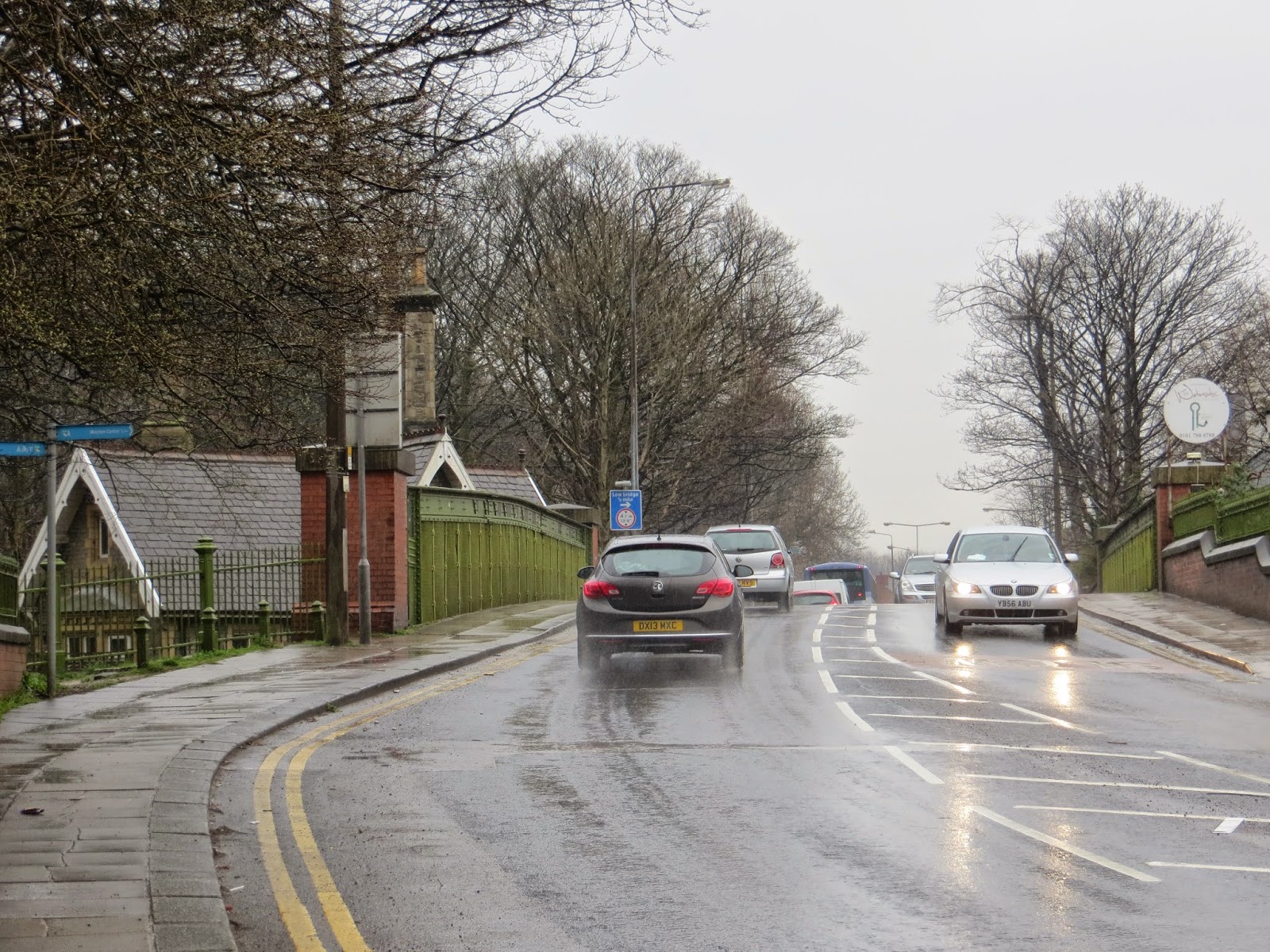 In fact NCN 55 is just over the bridge but there is no cycle facility linking the two together, not even a rubbish shared footpath. So it's back to fighting amongst the traffic on this busy section of road. 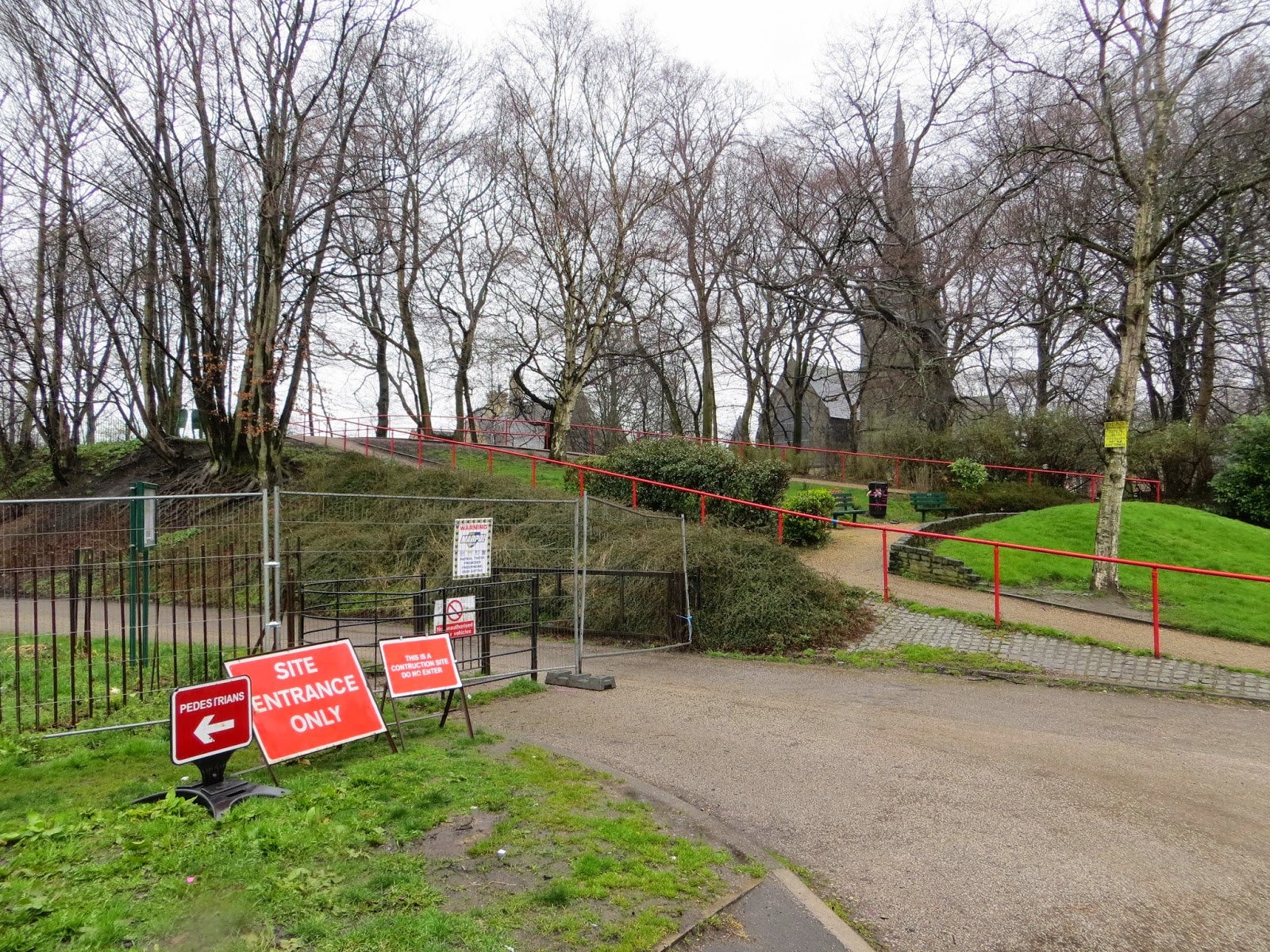 NCN 55 goes up that slope to join the old railway loop lines - it's a tough climb with a fixed gear.  The building site is where somebody is spending a lot of money to make a car park for Duke's Drive.  Cars coming out of there will make it really safe for getting onto and off that slope. 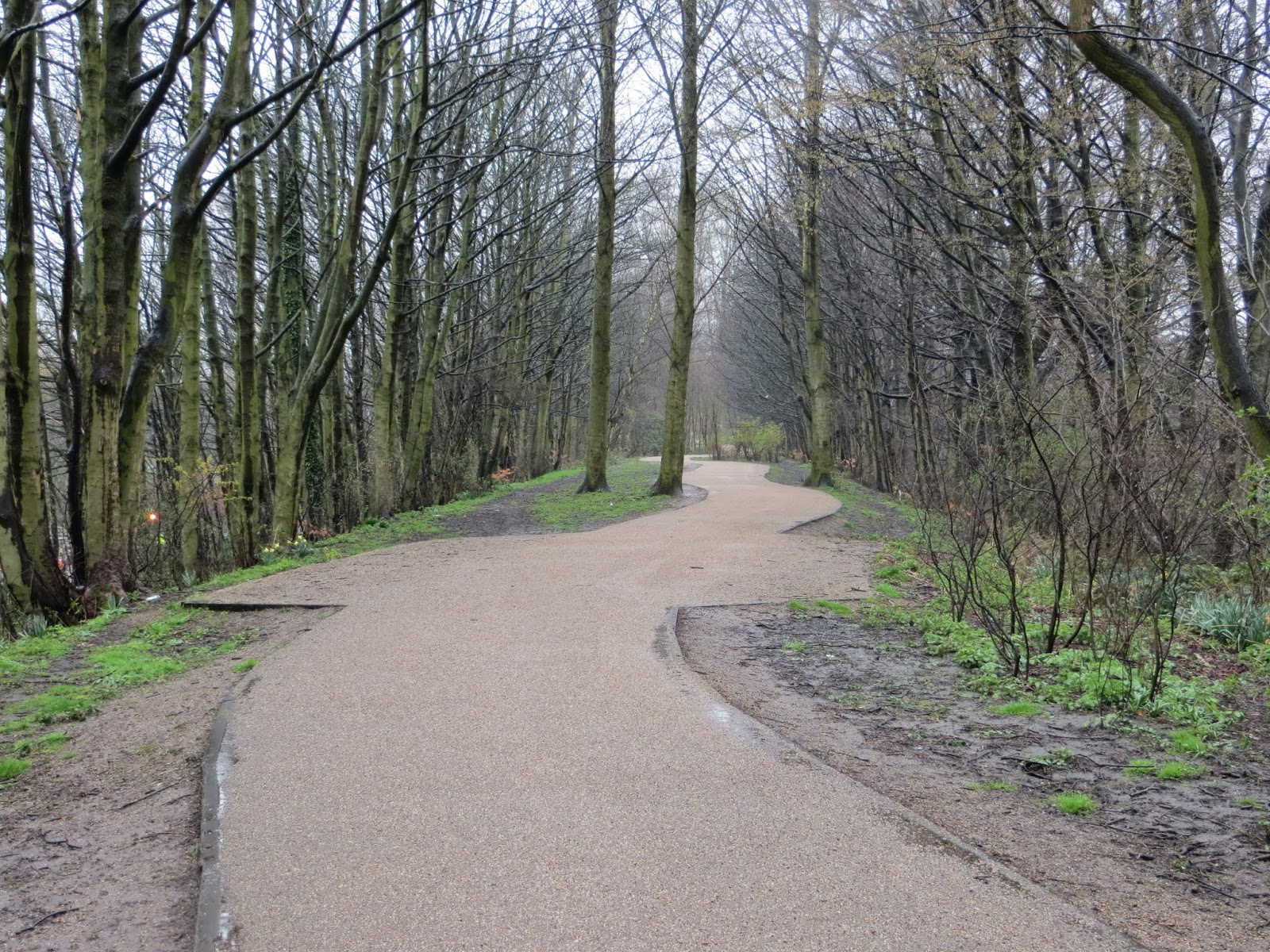 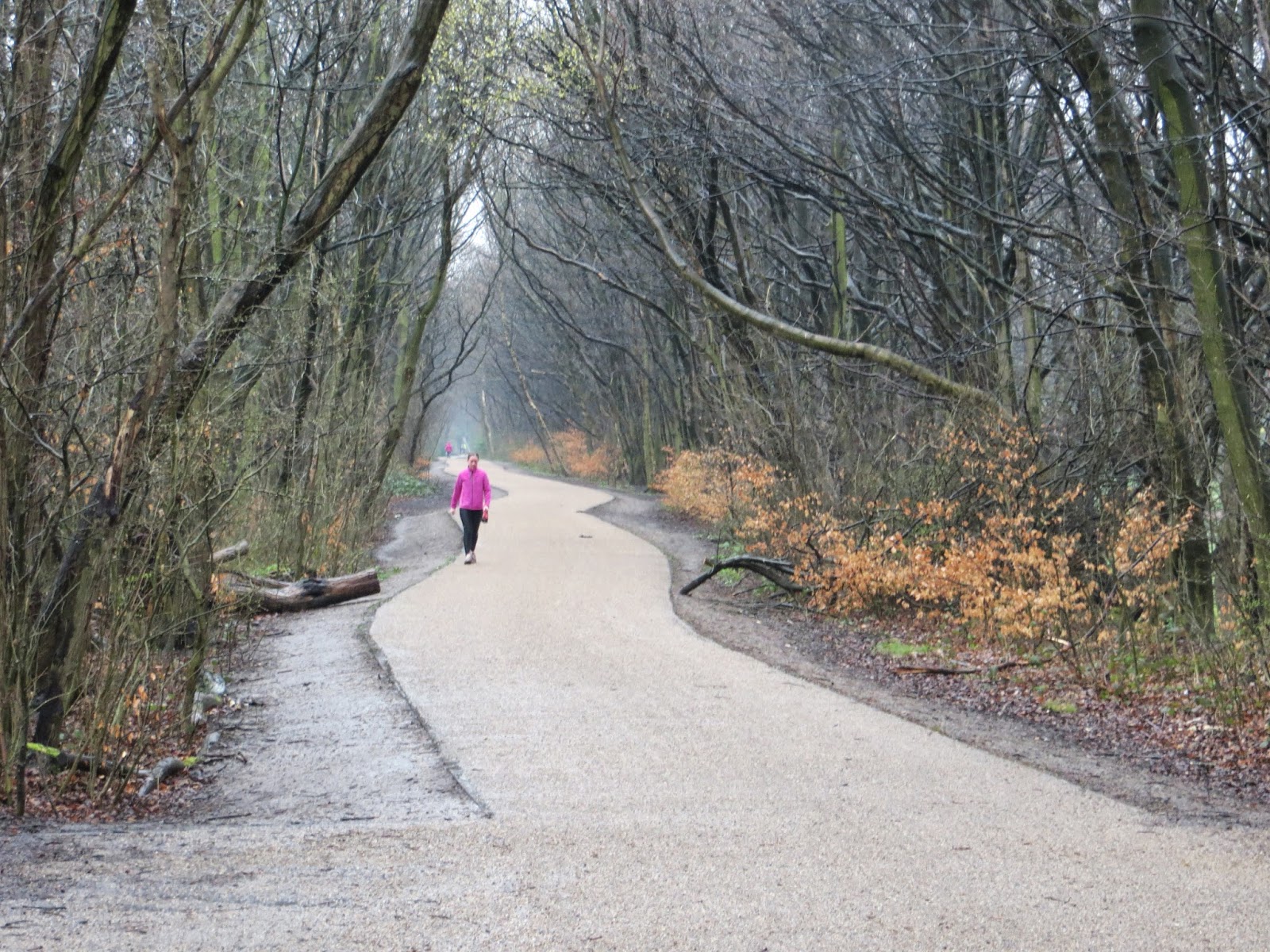 NCN 55 between Monton and the site of Worsley Station is quite a wide route but that still doesn't prevent it suffering issues with the fact that it is shared usage. One person with one dog can still effectively block the entire path and as for groups of people spread across the whole width with no intention of sharing it even though they can clearly see people heading towards them.

The surface along here is again tarmac covered in pea gravel, except here the tarmac is smooth and all of the gravel is fixed down, i.e. there is no loose surface.  This doesn't mean that it's perfect.  That meandering path looks very nice in day light but come the darkness of autumn and the leaves off those trees the edge of the path can not be easily determined even with very good lights.  I came off along here late last year and it hurt...

I leave NCN 55 at Worsley Station but the surface soon detoriates which is a shame as it should be possible to ride off road almost through to Bolton, Leigh or Wigan.

It's back roads almost all of the way from here except for crossing the East Lancs road where I cheekily use this recently renovated subway. 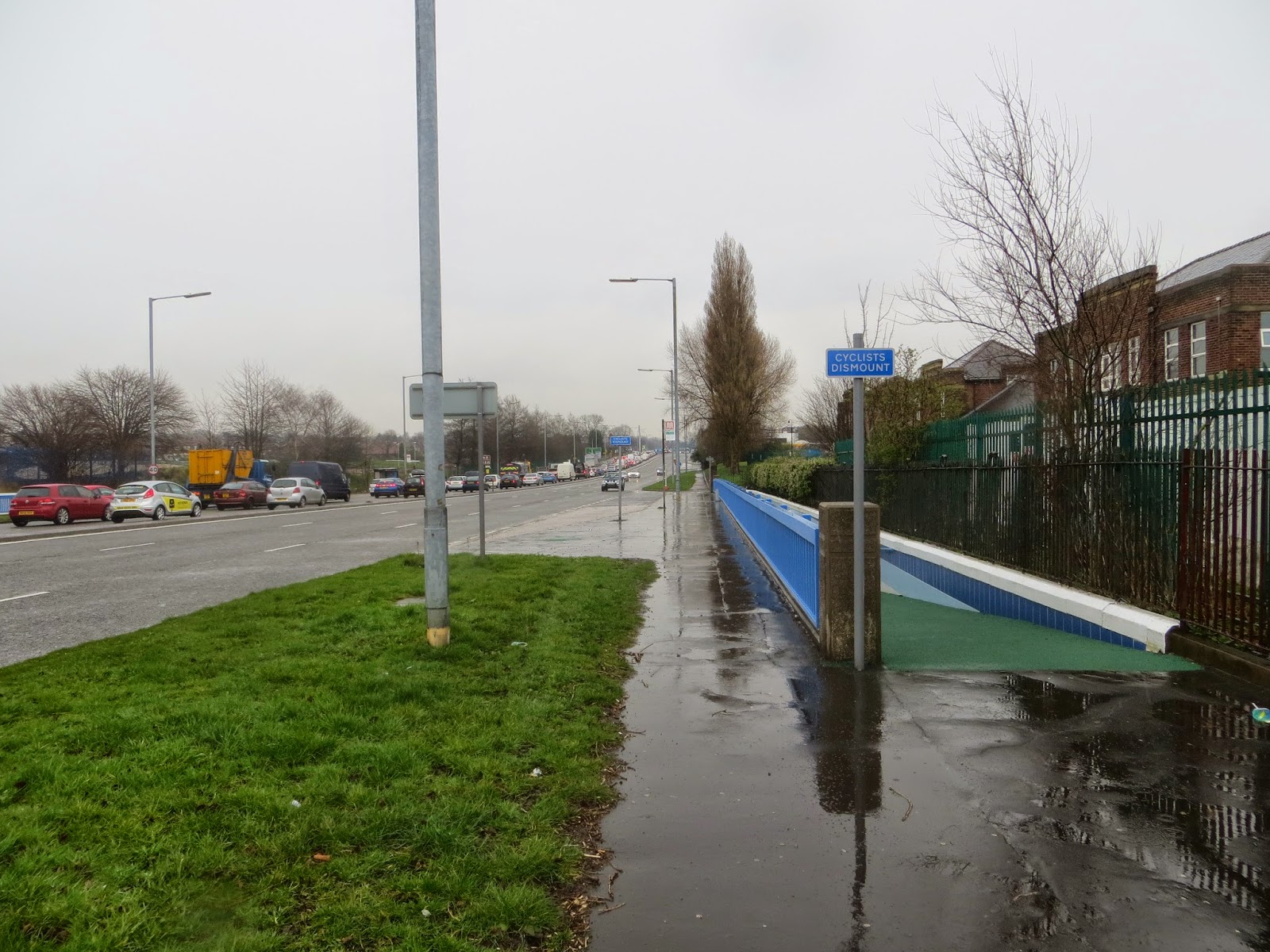 'Cyclist Dismount' signs apparently have no legal standing and are used where a sub standard shared facility becomes farcical and rather than actually do something properly the council cop out with a simple sign passing the buck.  The sign for the subway is where they've realised that a collision between a pedestrian and a cyclist could occur.  In reality if you use the subway sensibly then there is no reason a collision should occur. 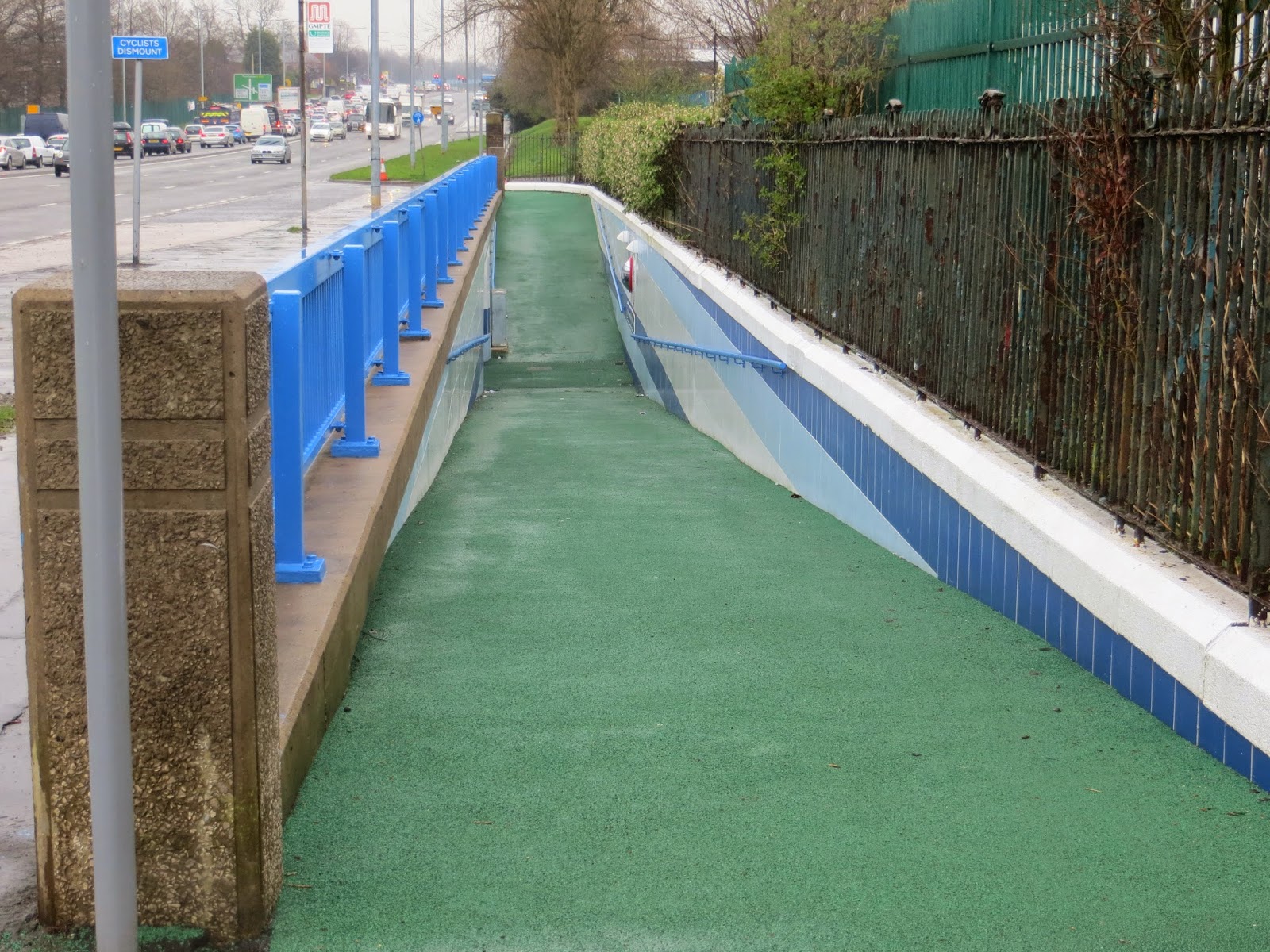 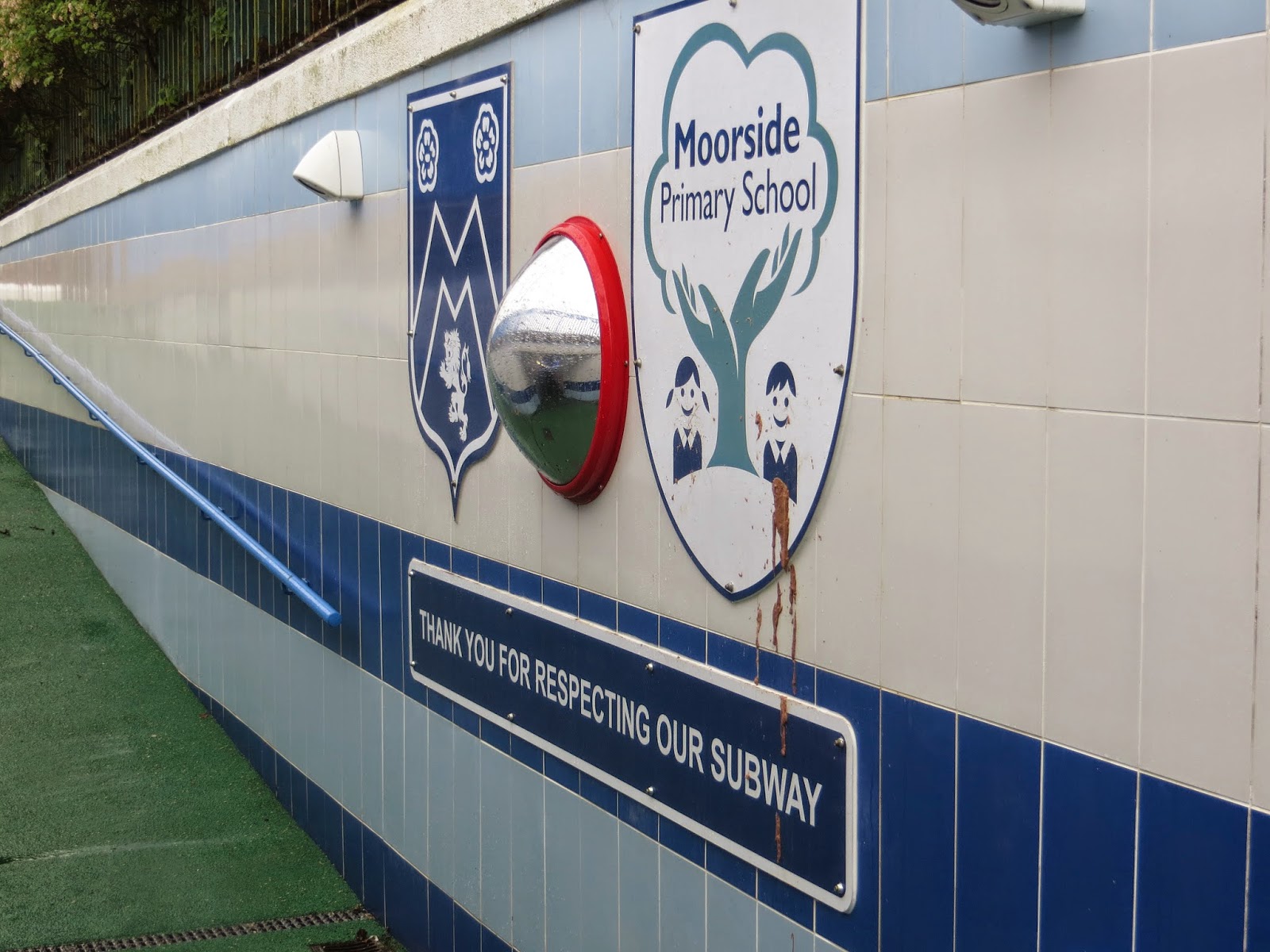 Especially as this really good mirror has been provided to enable those entering the subway to see anybody already in it and vice versa. 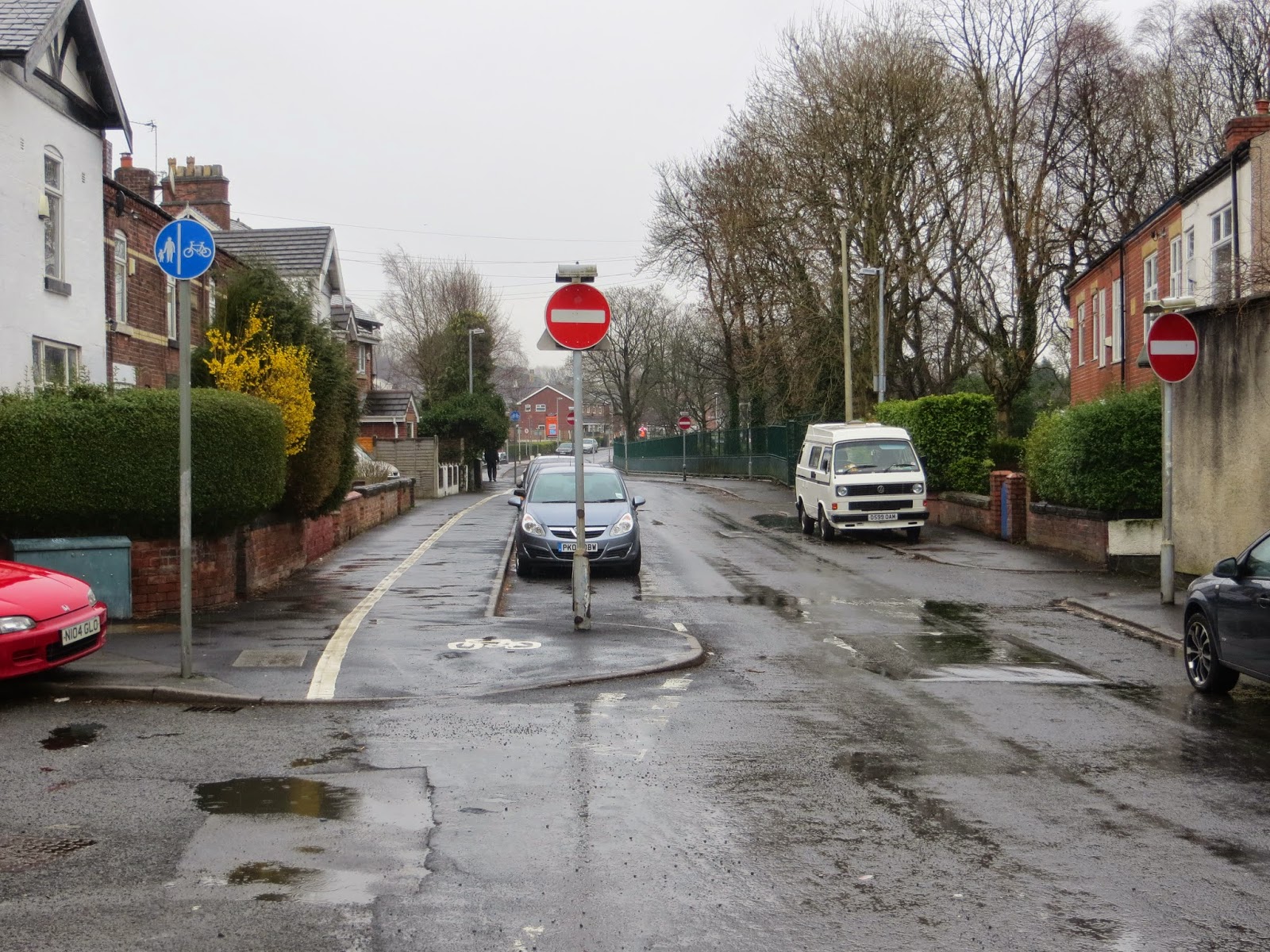 The final bit of infrastructure is this contraflow cycle lane.  It's a bit narrow but very useful.  The cars have been restricted from using the road as a rat run without impinging on other road users.  The parked cars are facing the oncoming cyclist so there is reduced risk of being doored.  If you were to be doored you would actually push the door back into the driver.  The cycle path is also spaced away from the properties so you get some warning of somebody stepping out. 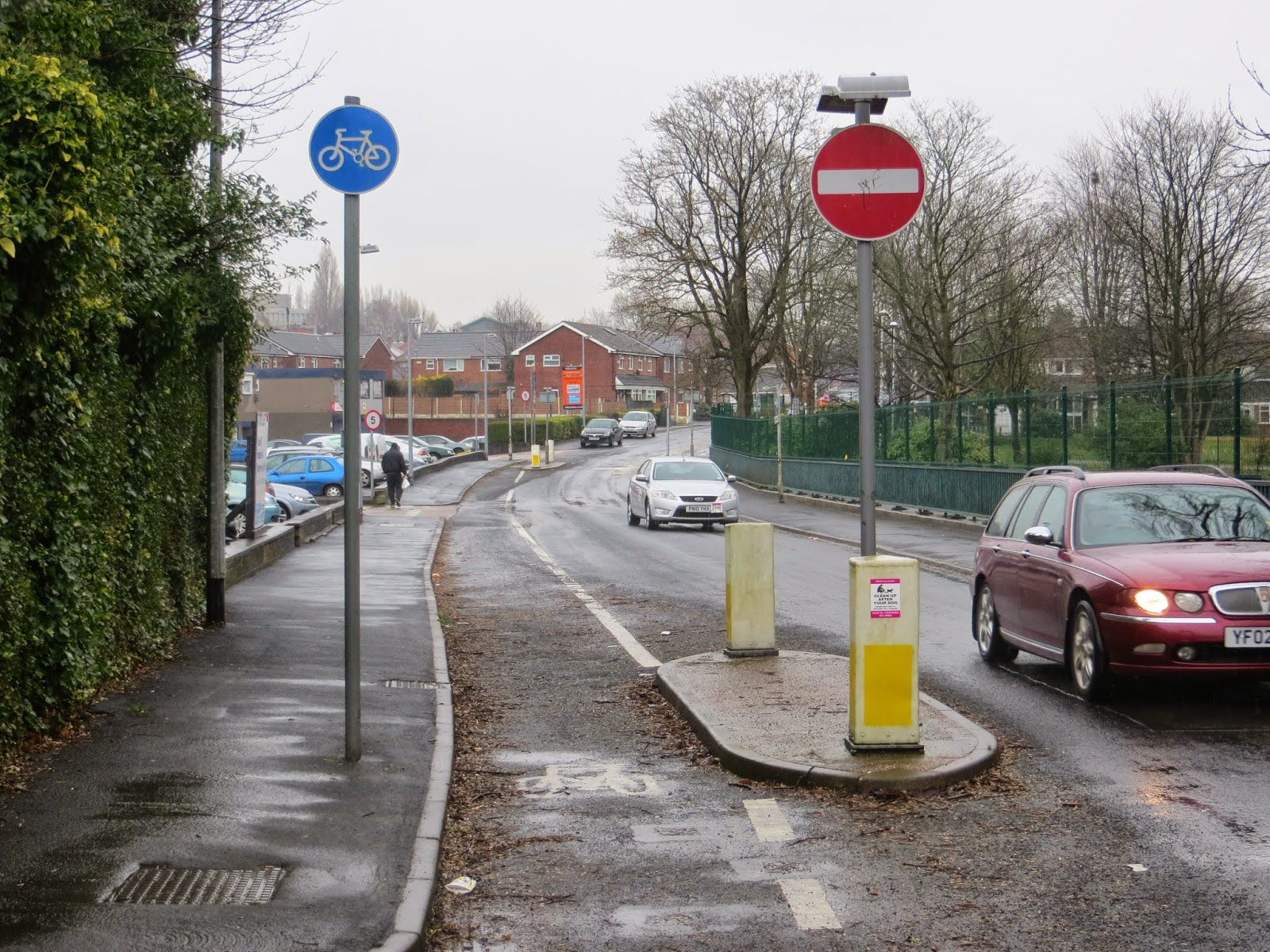 The second half of the contraflow is back on the road which works fine apart from it isn't cleaned and whilst being free of glass it's full of grit and other detritus pushed aside by the cars.
at 15:10