For much of its length in Trafford the Bridgewater Canal roughly parallels the extremely busy A56.  Kate Green is the MP for Stretford and Urmston and has challenged the council on the lack cycling provision along the A56 as well as other places.  Issues and response can be found here. The council explain the lack of facilities as follows :

Historically it has been very challenging to provide  dedicated cycle facilities on the A56 due to the restrictions of available road space, and the obvious need to keep traffic flowing on this congested route.

There could be a large heated debate on this statement but I won't go into it here. They provide an alternative which in theory could be reasonable


For this reason, we have adopted a policy in recent years of promoting high quality alternative parallel cycle routes to the A56.  Most particularly, the Council has secured £1.3m from the government’s Local Sustainable Transport Fund to extend the current extent of the ‘Bridgewater Way’ canal tow path walking and cycling route, matched by private sector contributions and the Council’s own funding

So the council see the provision of the Bridgewater Way as a high quality alternative to the A56. You'd therefore expect it be absolutely first class in order to attract drivers to commute by cycle and reduce the congestion on the A56.  However, this is cycle provision in the UK and particularly Trafford, so it falls some way short of good. 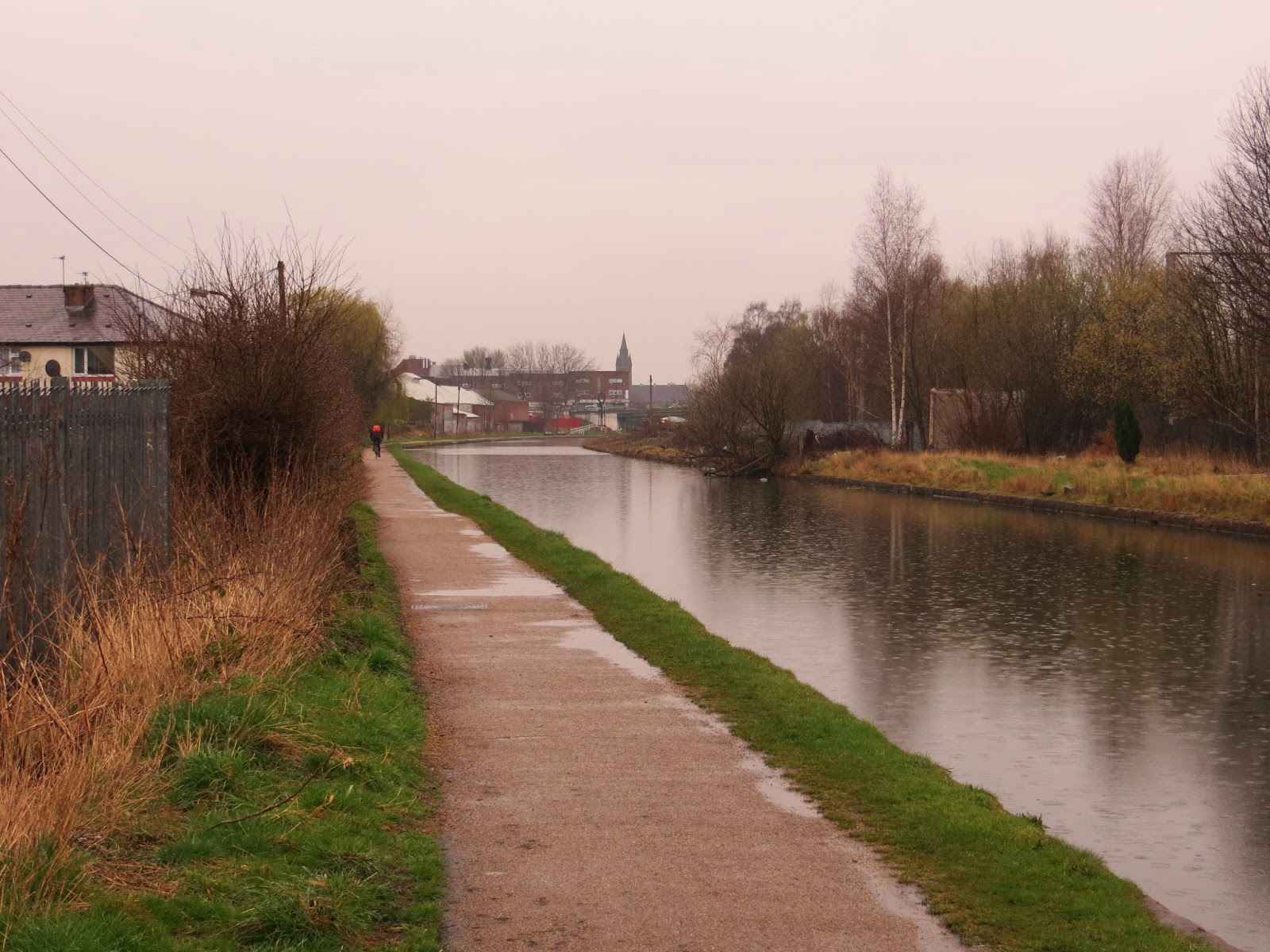 Whilst the canal towpath has been improved from Brooklands northwards I join it from the Trans Pennine Trail at Watch House Cruising Club in Stretford.  This is the view northwards from just after the cruising club.  The path appears to be of a reasonable width with a good surface.  However, it hasn't been laid well and this section always has large puddles if there is any sign of rain.  The surface is also rubbish.  It's been covered in pea gravel.  Apparently this is for safety reasons when it is icy.  However, for the majority of the year it's a downright hazard.  No cyclist wants to ride on gravel, it makes pedalling more difficult, if it's been newly laid or you're off the walking line it can force where the wheel is going and if you need to manoeuvre or brake hard then you're not on a solid surface.  If you're unfortunate enough to come off it rips through clothing and skin getting embedded in the bloody mess it creates.  On top of this the gravel used early on appears to have been a sharp flint like substance which can make its way through the toughest of tyres.  More recent gravel seems to be more tyre friendly from that point.  A plain tarmac surface would have been much much better as used on cycle paths elsewhere. It would also make the tow path much more accessible for wheelchair users. 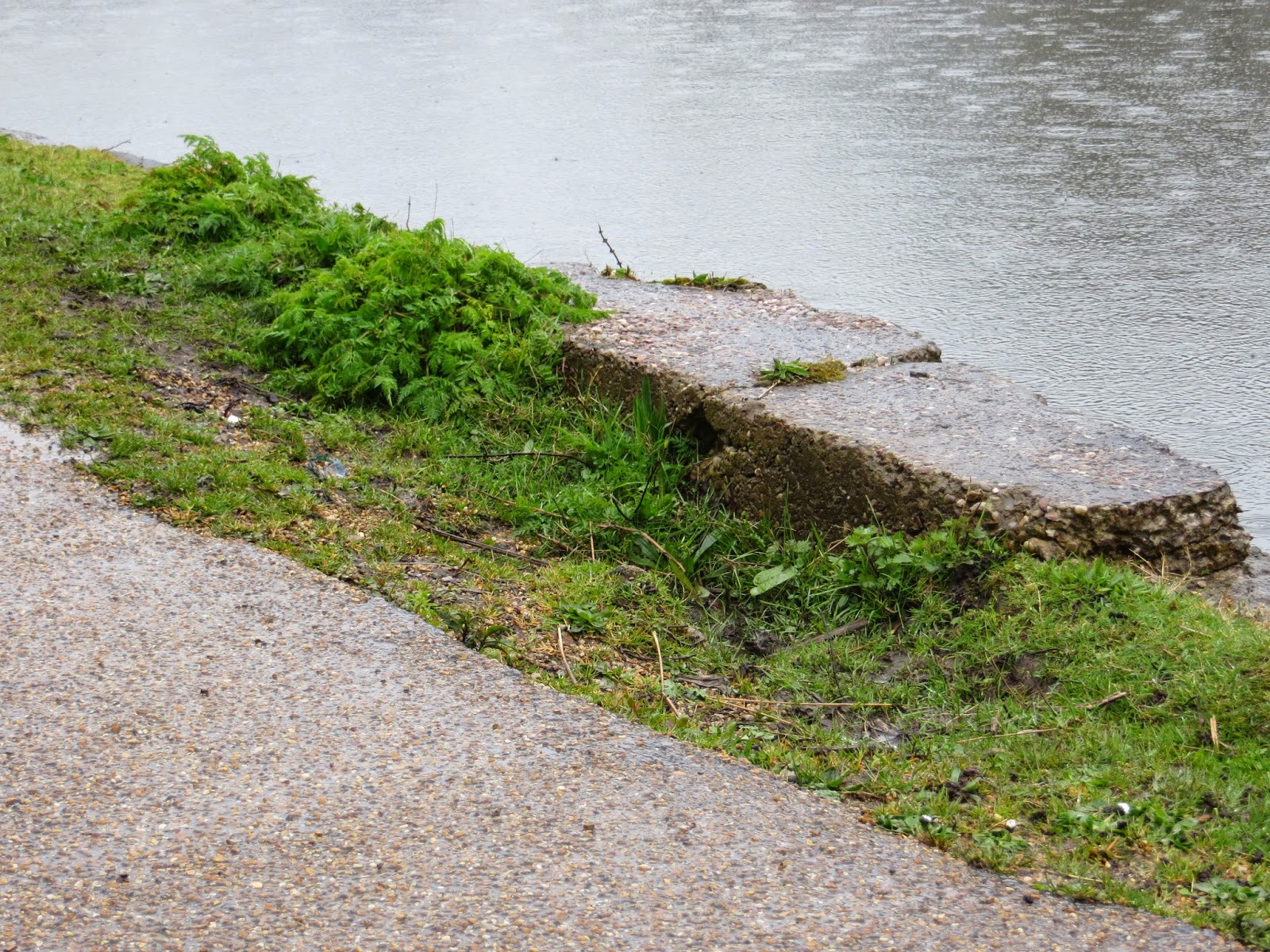 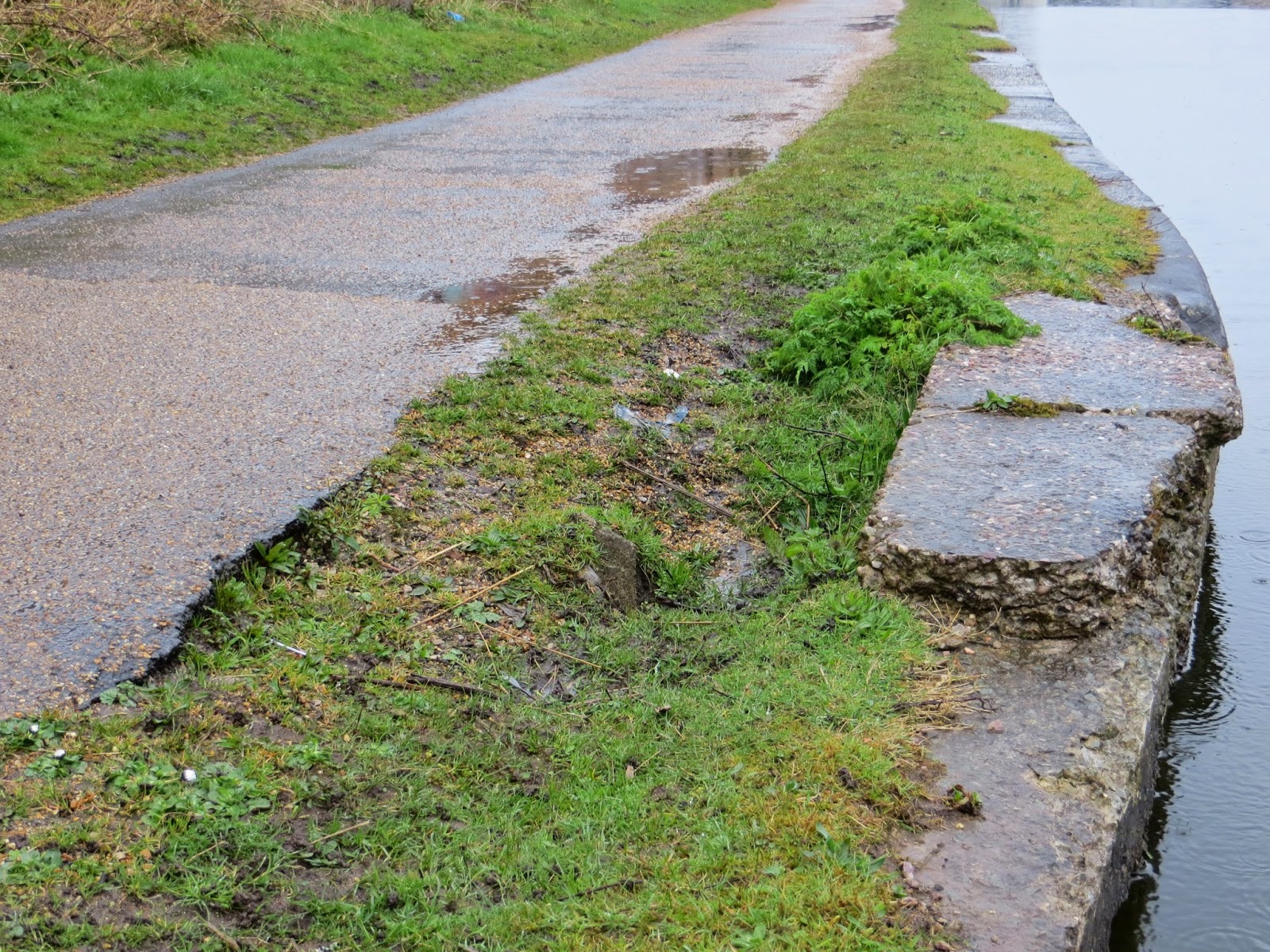 Whilst conduit for lighting appears to have been installed (it's absent from later improvements) there is no lighting along the canal and in places there is also none nearby, i.e. it is dark at night.  You'd therefore expect in this risk averse legalistic country that the owners would have wanted any possible dangers removed.  So it's something of a surprise to find that the hole above is sat there just waiting for somebody avoiding a walker or dog to ride into it and go for an early bath.  If I come down the canal at night I'm always glad when I spot this as it means I won't be going for a drink. 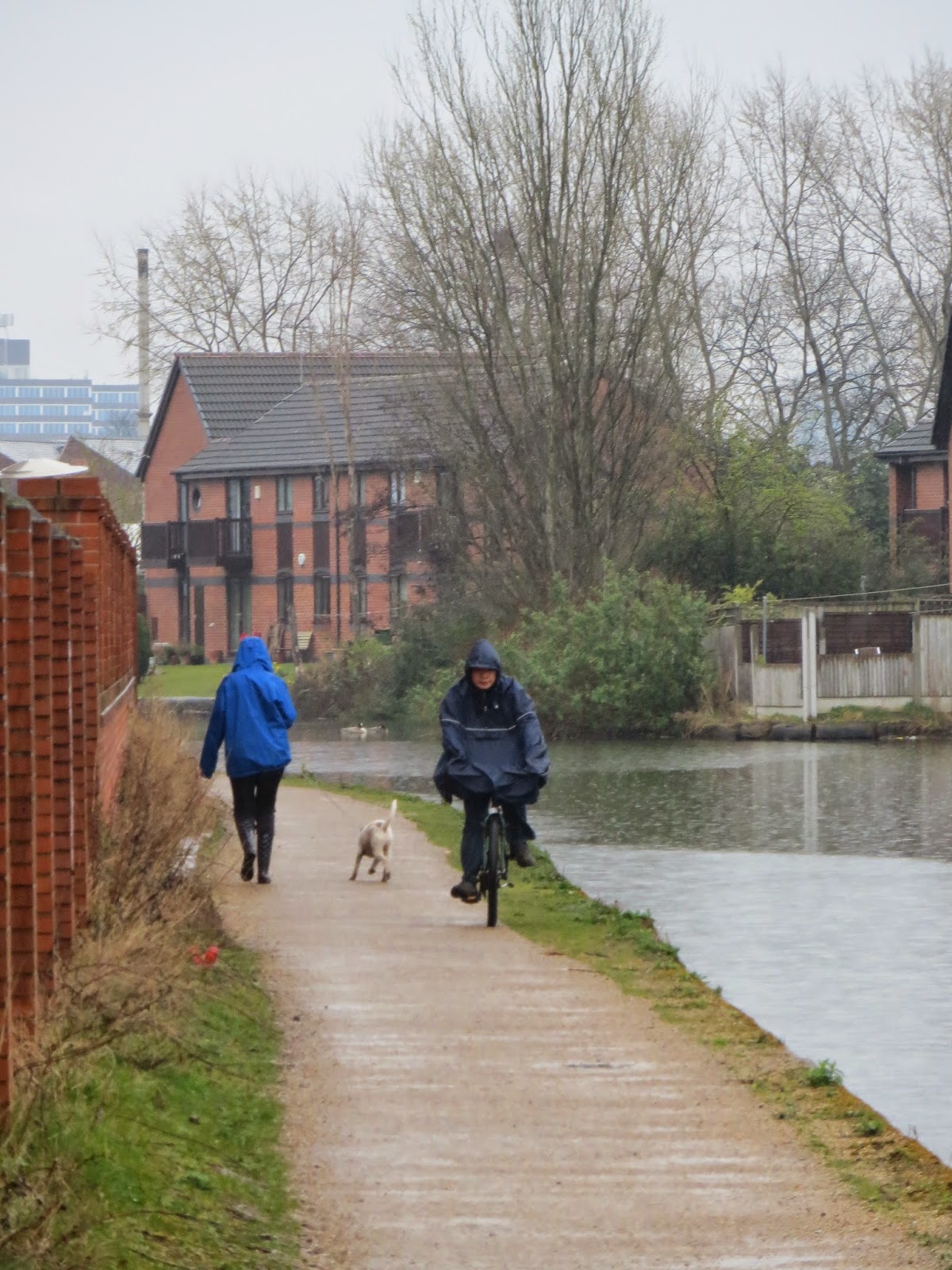 One issue that drastically increases with the lighter evenings and better weather is other path users, particularly those with dogs.  This is not to say that they shouldn't be on this particular path but to identify that the shared usage makes it an inadequate cycle provision other than for a leisurely pootle.  In the above photo you can see how much space one lady and her dog take up and how far over the cyclist has had to go in order to pass.  This lady was actually quite considerate and would bring the dog in when someone passed.  However, not all dog walkers are the same and a lot of the time you have to slow down to walking pace, weave around the walker and then dive across to the other side of the path to pass Rover.

Walkers and runners on their own can be just as big an issue if not more as they frequently have headphones on and are walking down the middle of the path or weaving from side to side.  The headphones make it nearly impossible to get their attention so passing them is risky at any speed and this is invariably on the loose stones put there for our safety.  Then there are the ignorant pairs / groups who quite clearly see you coming but think you can cycle on water.

As an alternative commuter route into Manchester and Trafford Park it falls a long way short of adequate.  It's a pleasant ride but it's not a mass use alternative to the A56. 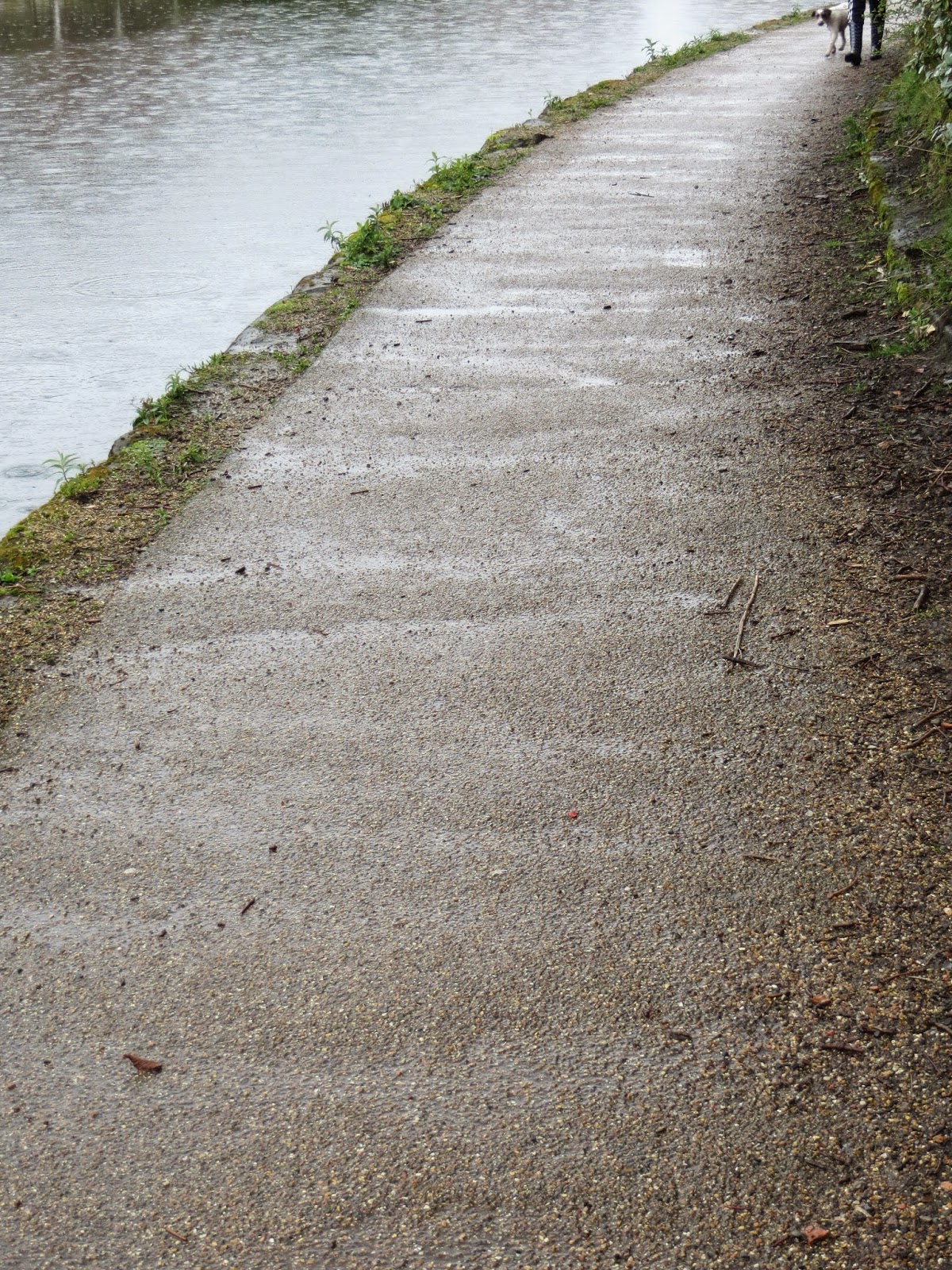 The unsuitable pea gravel surface has already been discussed.  However, the tarmac surface underneath is also substantially below par.  No part of the upgraded Bridgewater Way sports what could be described as a smooth surface that would make cycling pleasant.  The section north from Stretford to the A56 is particularly bad and uncomfortable.  The rain water helps show up the ridges and troughs each of which rams the saddle into your delicate parts and shakes your handle bars.  Not even mountain bike tyres can make this comfortable.  I wouldn't want to be in a wheelchair or small wheeled motor scooter along here.  There's no excuse for this surface other than shoddy workmanship and poor quality control. Other cycle tracks can provide lovely smooth tarmac that is a pleasure to ride on, so why do we get this crap? 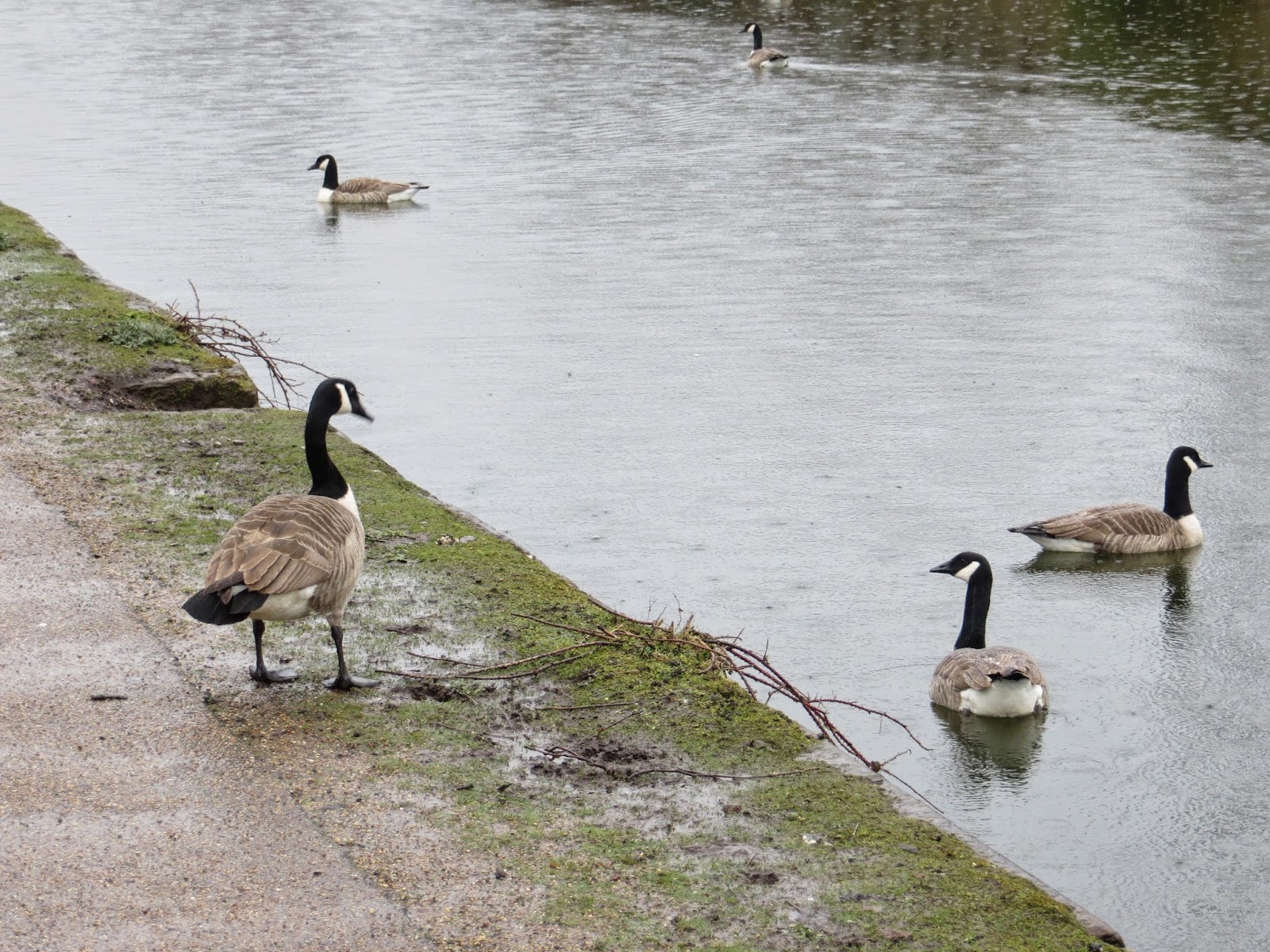 The locals, they've no road sense and can sometimes be aggressive. 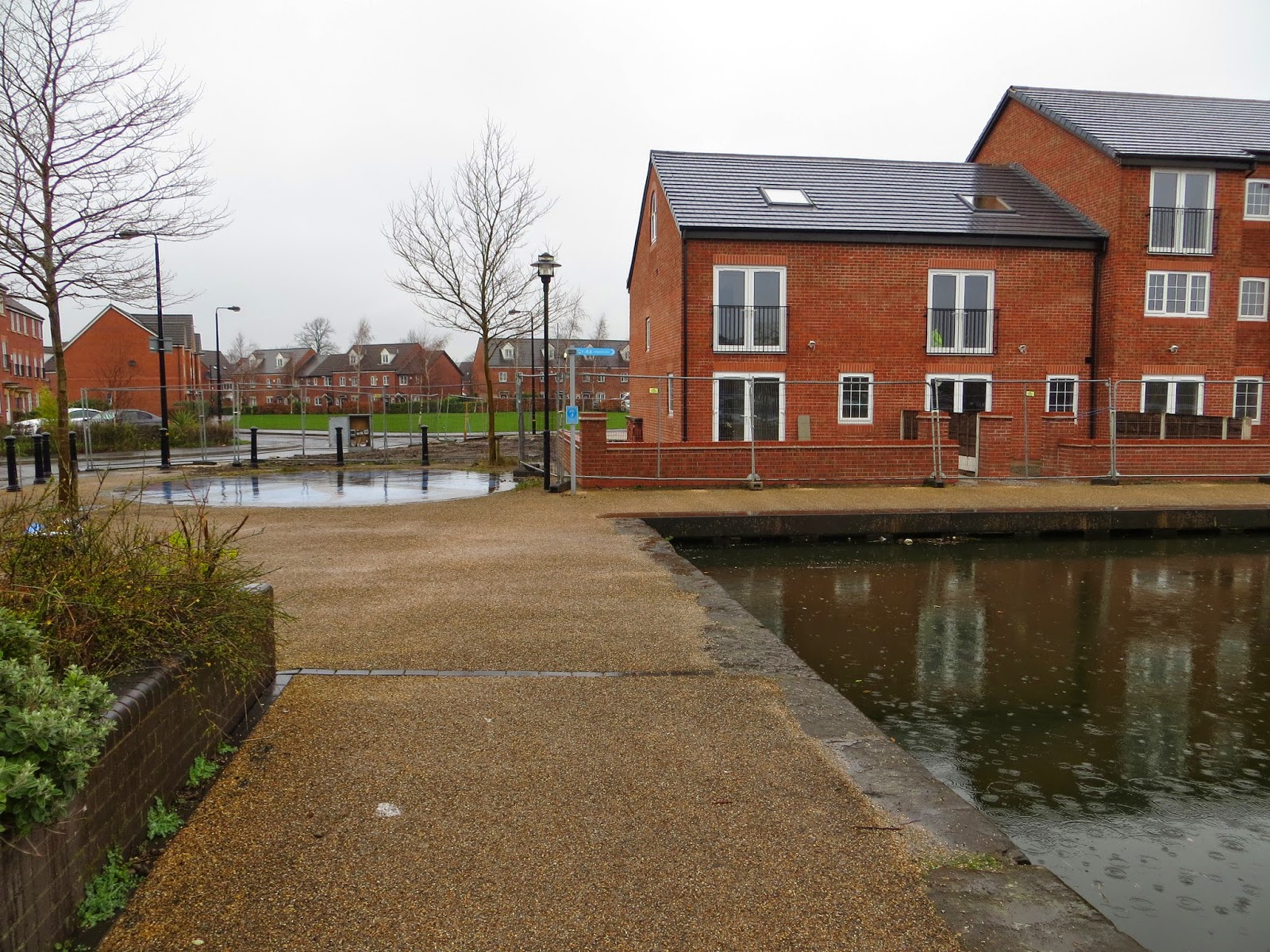 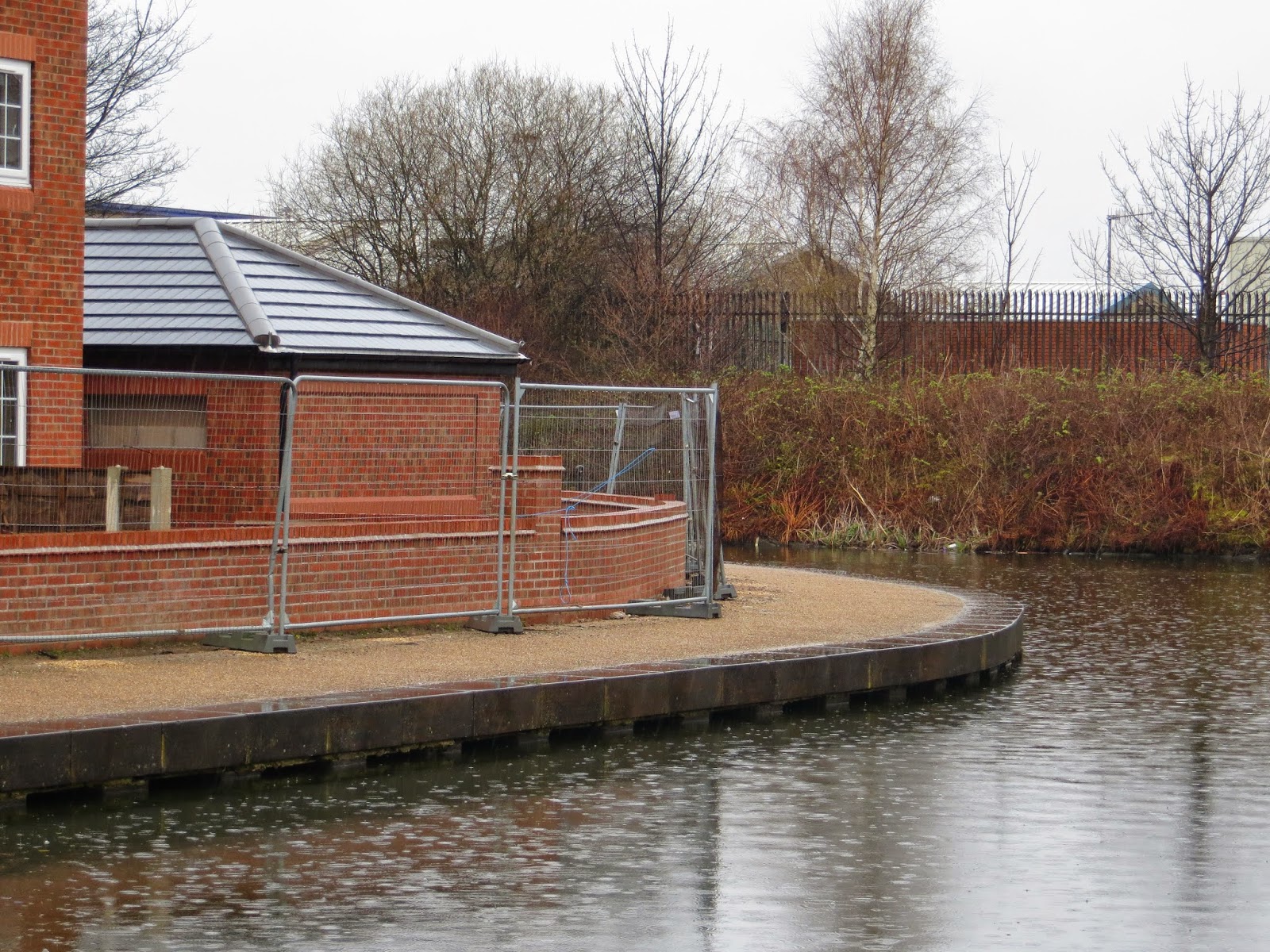 At Stretford Marina there are two sharp bends, one is a very tight ninety degrees and the other is a blind bend.  Both have to be taken slowly but even so are scary with the loose gravel giving the feeling that the tyres might just let go at any moment. 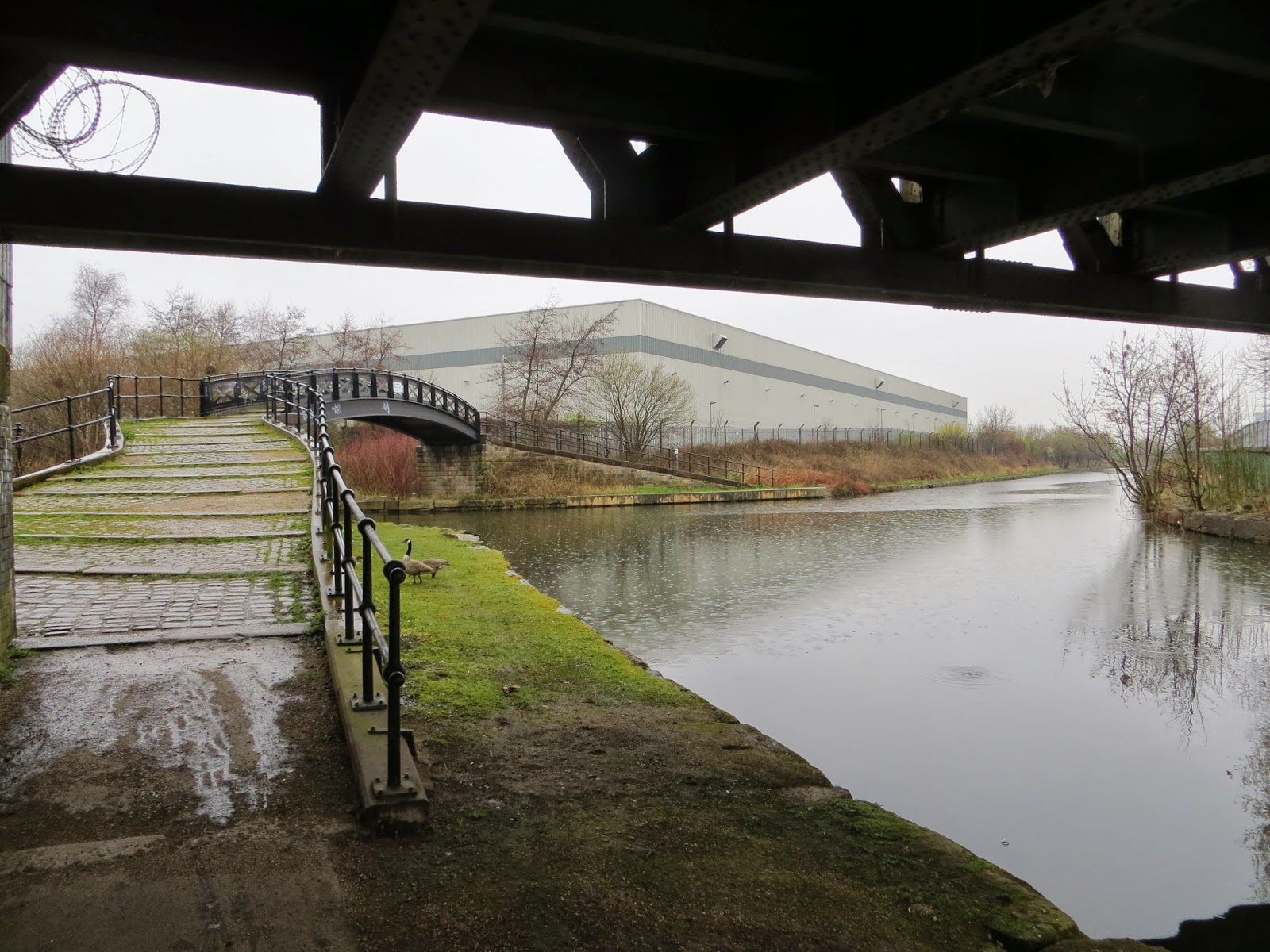 At Watersmeet the Bridgewater divides in two, the right hand branch here going past Salford Quays and on into the centre of Manchester.  The left hand branch under the bridge goes to the canal's original source - the coal mines in Worsley, Salford.  You'd have thought that if Trafford were serious about the canal path being the cycling equivalent of the A56 then the branch towards Manchester would be the first to be upgraded.  No, the next section to be upgraded was an isolated part from the bank of the Ship Canal at the Swing bridge to Park Way.  This either gives more evidence to the theory that Trafford don't see the cycle as a serious means of transport capable of reducing its congestion issues or that Peel, owners of the Bridgewater Canal and with a vested interest in the Trafford Centre, adjacent to the first isolated section, have had influence over which sections are upgraded first. 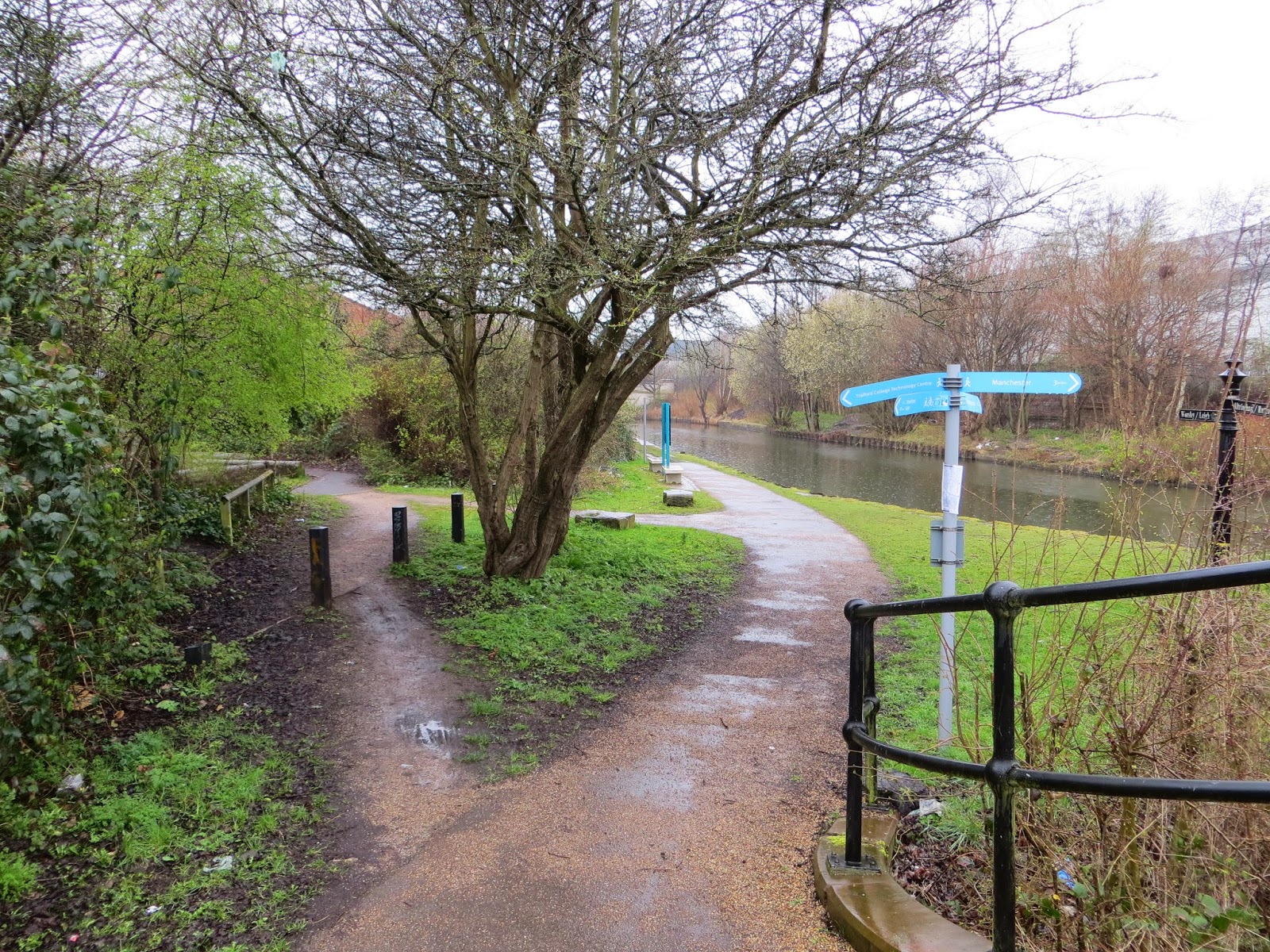 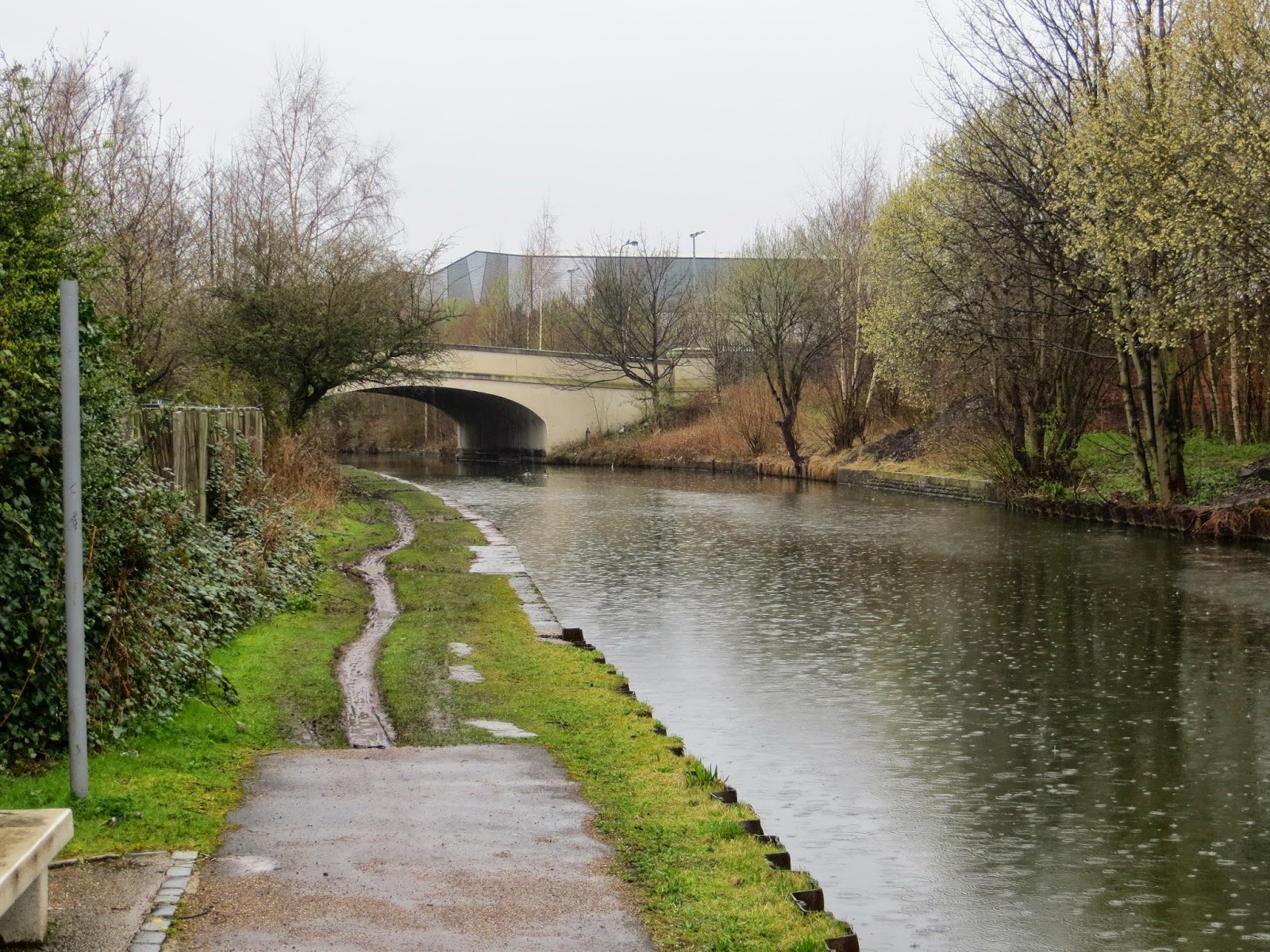 Whilst another section of the tow path has just been completed from Park Way to behind the Kelloggs factory there is still a short section of just under 1/4 mile that is best described as a mud bath.  Having had no response from Trafford's cycling officer as to why the section had been left I eventually got a quick response from Peel via the Friends of the Bridgewater Canal.  In it they stated that this section hadn't been done as it needs extensive canal wall refurbishment before the upgrade can be undertaken and that the upgrade is expected to be completed before the end of 2014.  My response would be to ask why this wasn't done first as unless you are prepared to negotiate this muddy bit the new section is unusable by bike.  More joined up thinking. 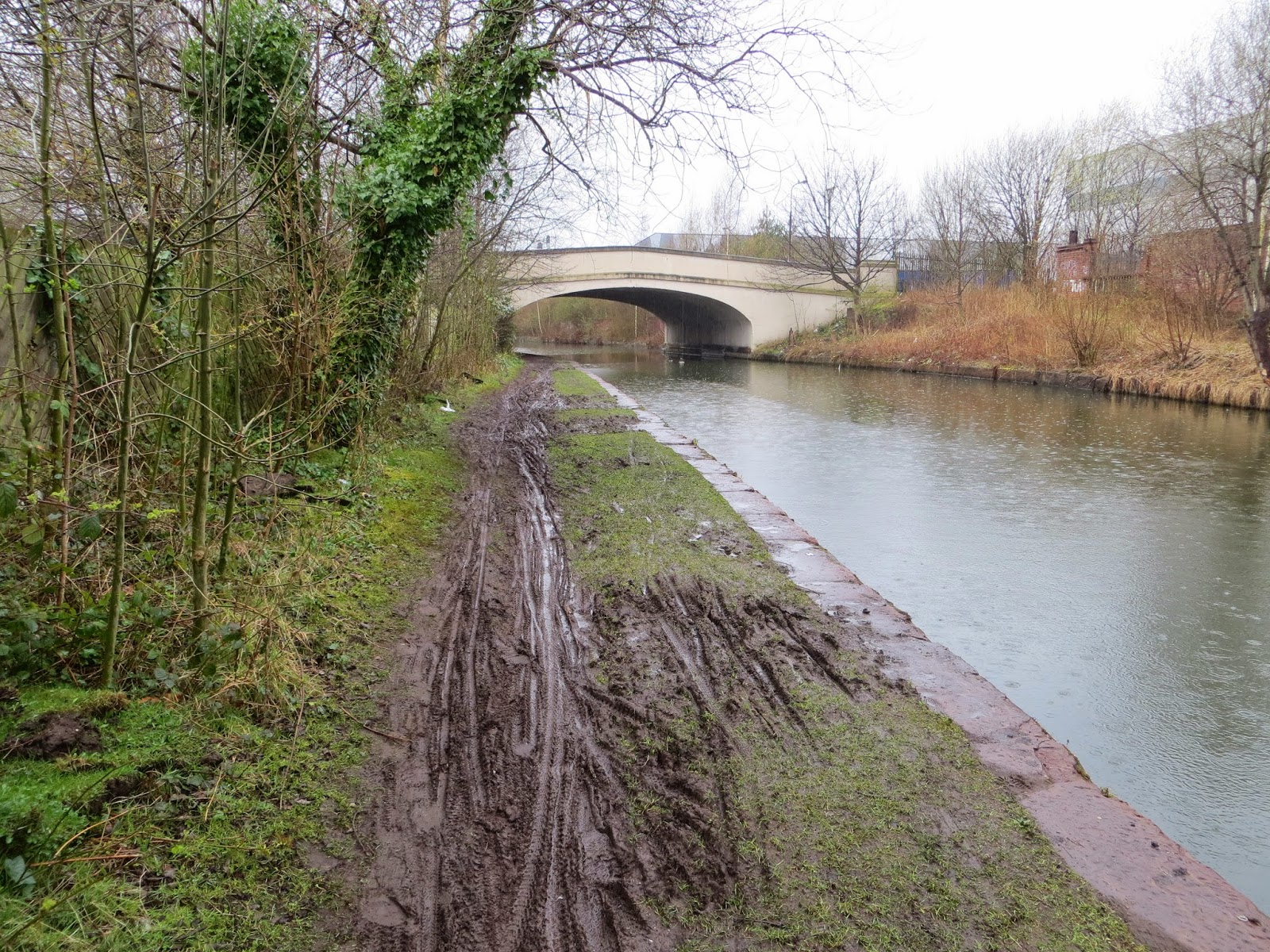 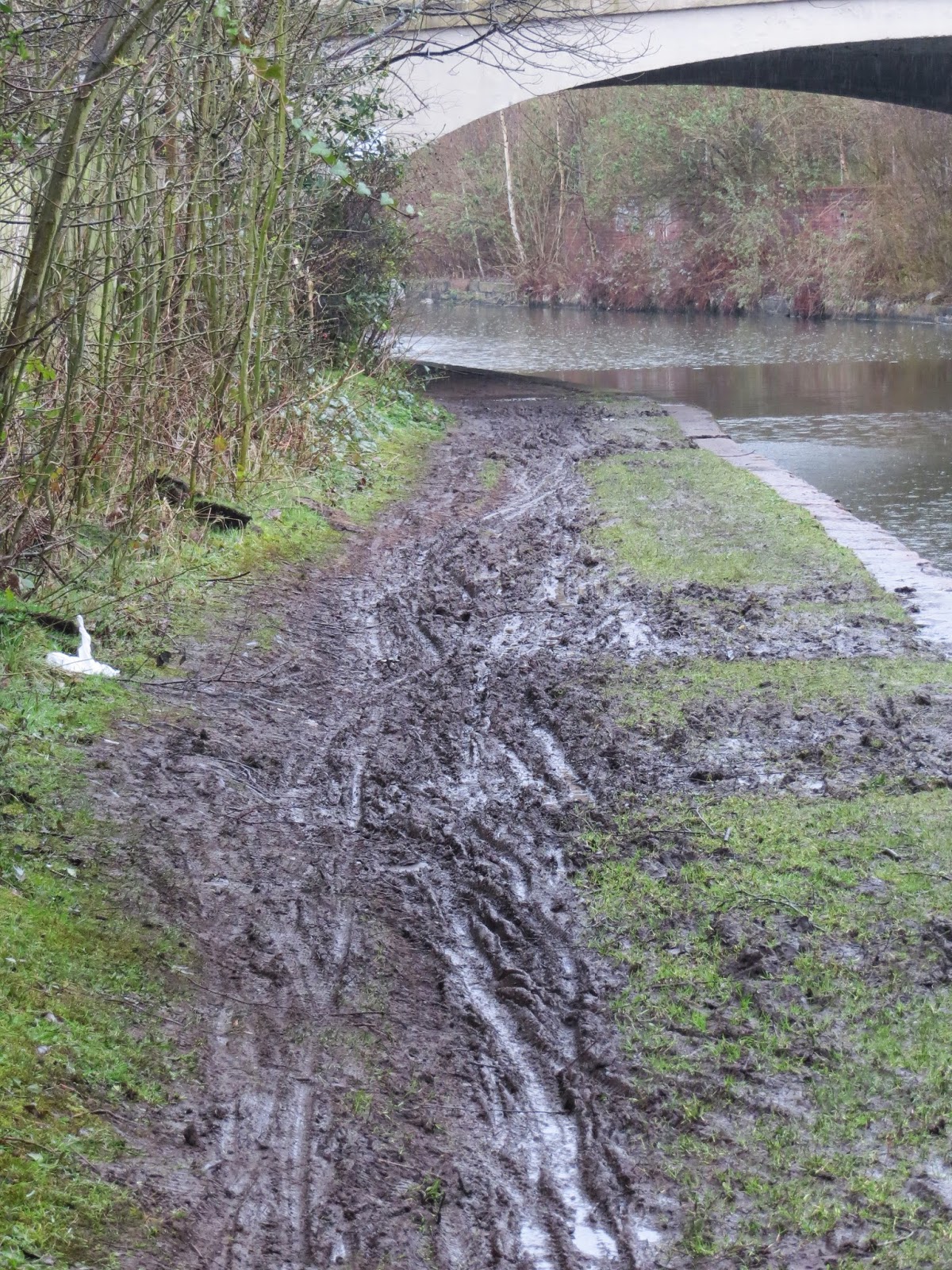 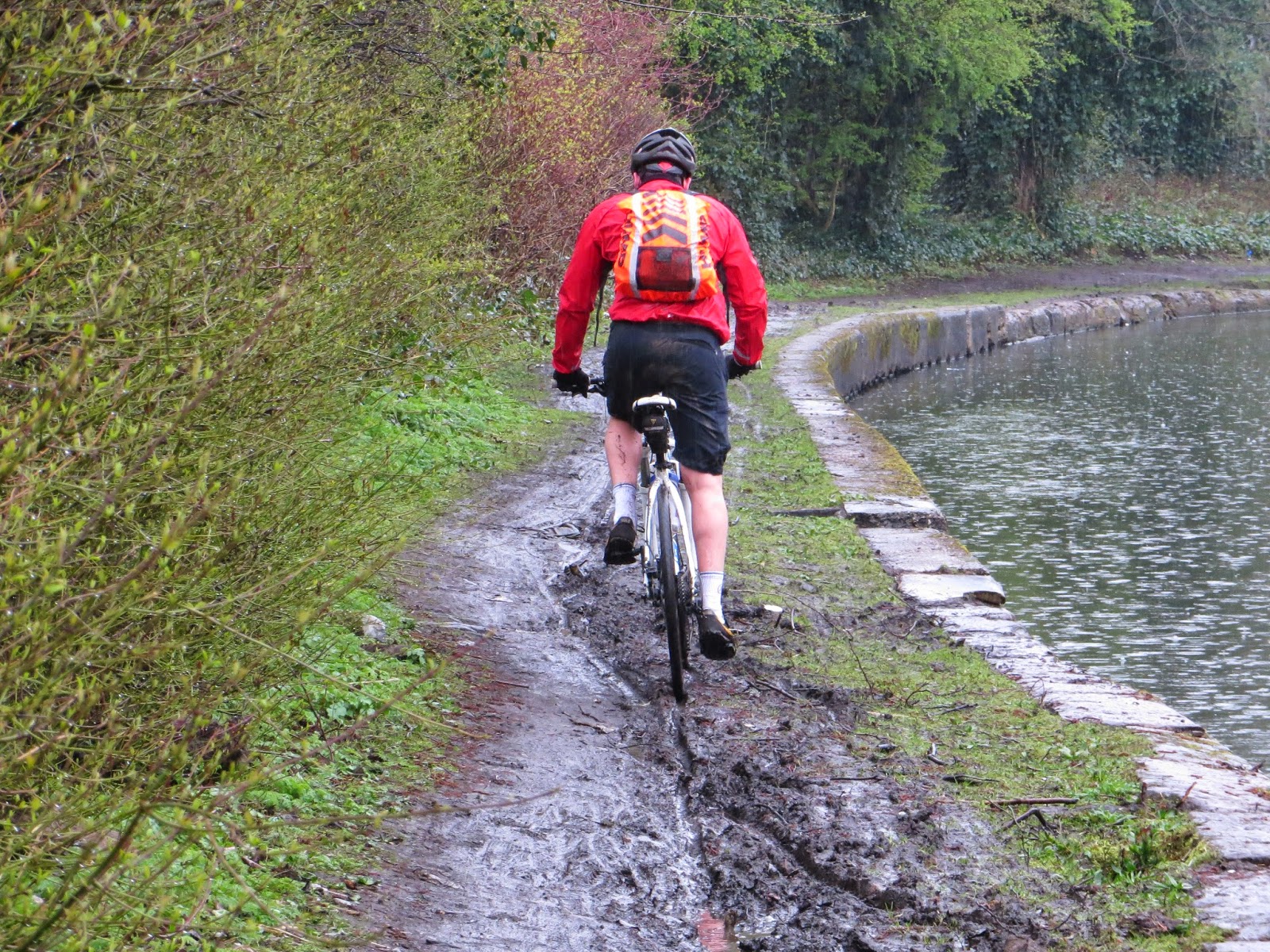 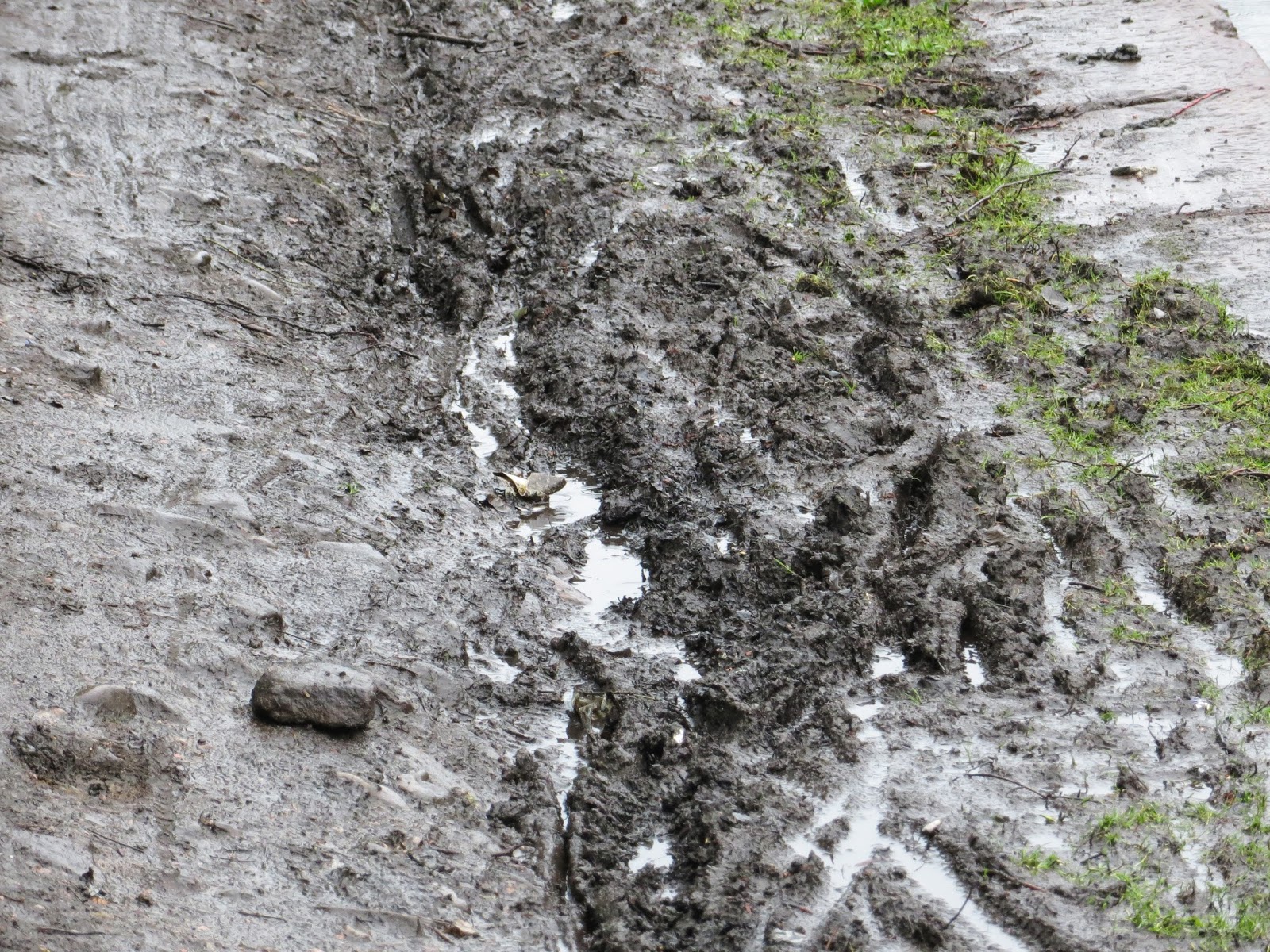 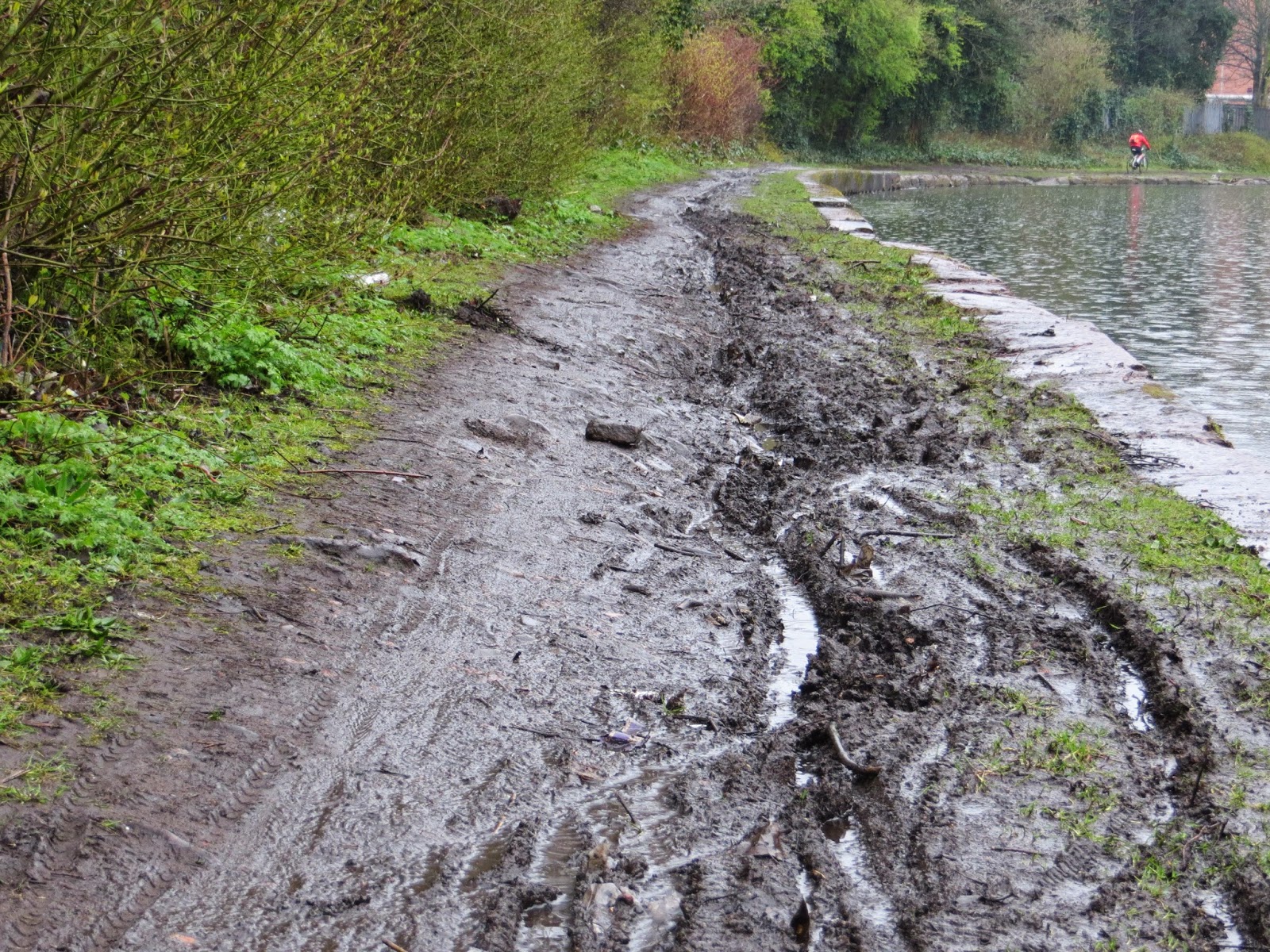 There is evidence that the upgrade will happen sooner rather than later as despite it being the end of March /  beginning of April and therefore the breeding season for our wildlife the powers that be have seen fit to cut down trees and remove all of the undergrowth along this bit.  Work is now under way on the repairs to the canal wall.  The shrubbery and trees have also been removed on at least the beginning of the Manchester branch. 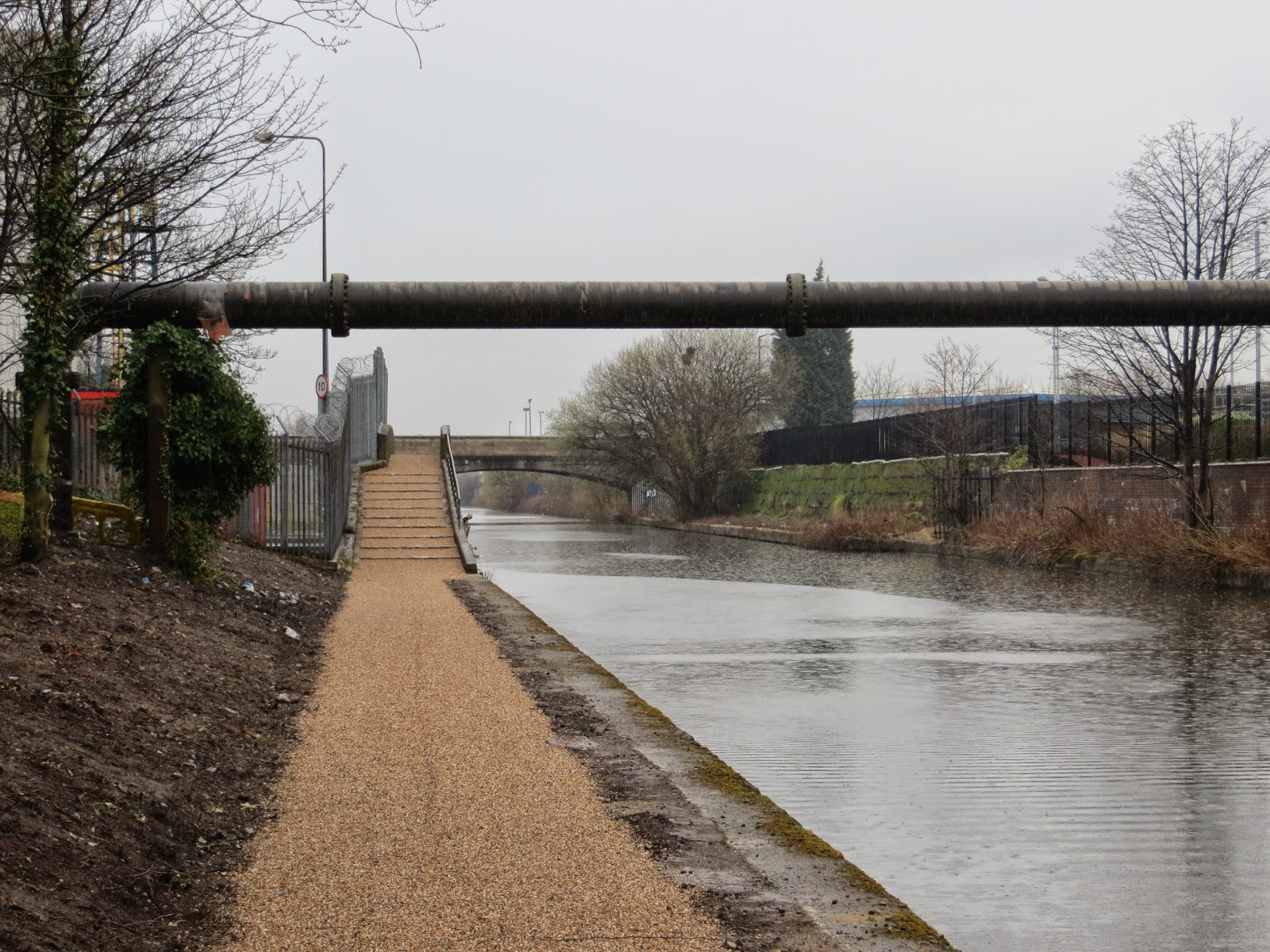 With its large, uneven steps the bridge behind Kelloggs was previously a challenge even to a mountain bike. The upgrade is a massive improvement but yet again a smooth tarmac surface without those stone courses would be much more accessible. 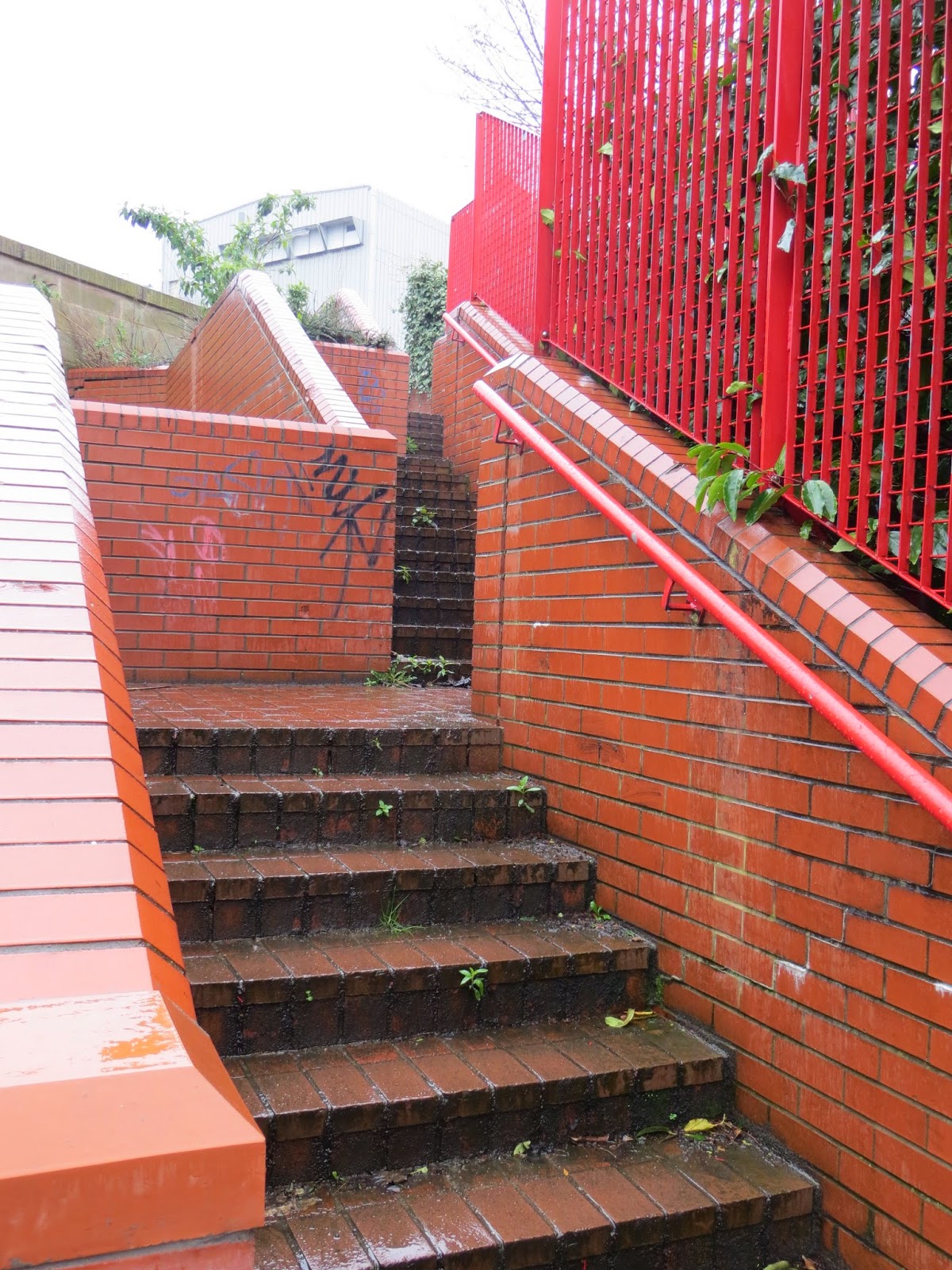 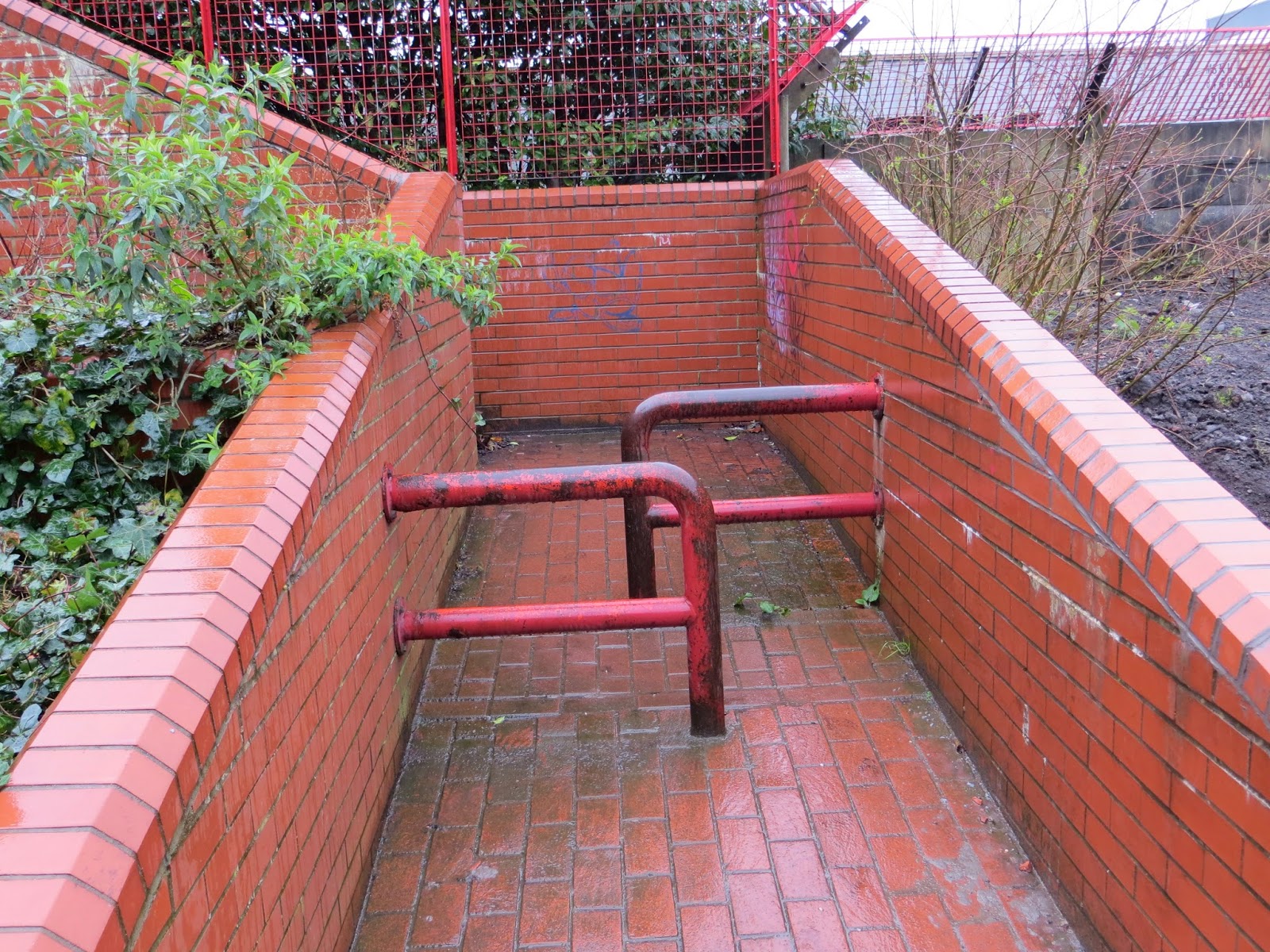 This set of stairs and barrier up to Mosley Rd/Park Rd is the only other access to the southern end of the new section.  Not very welcoming to any cyclist.  A bike won't fit through that barrier. 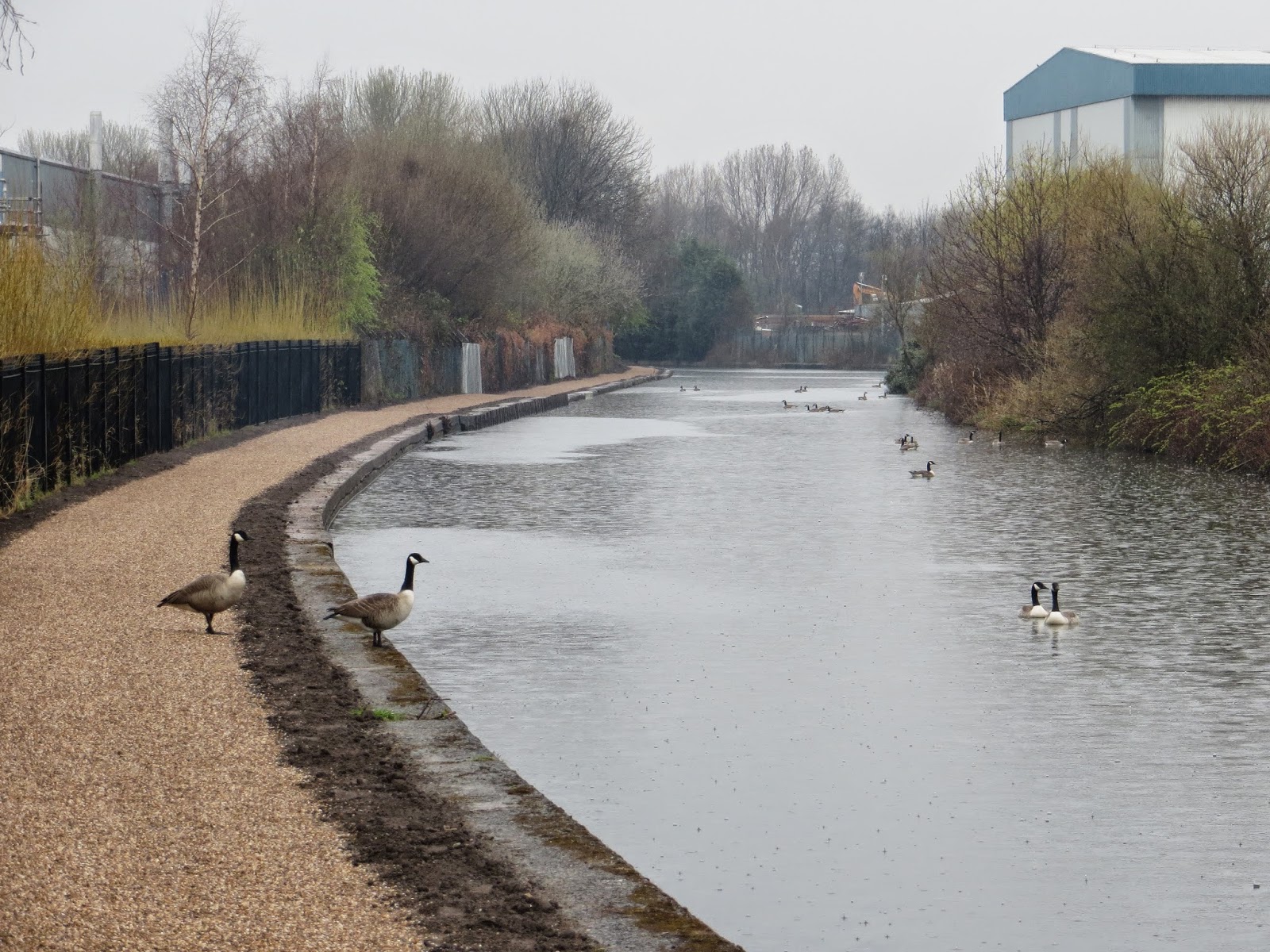 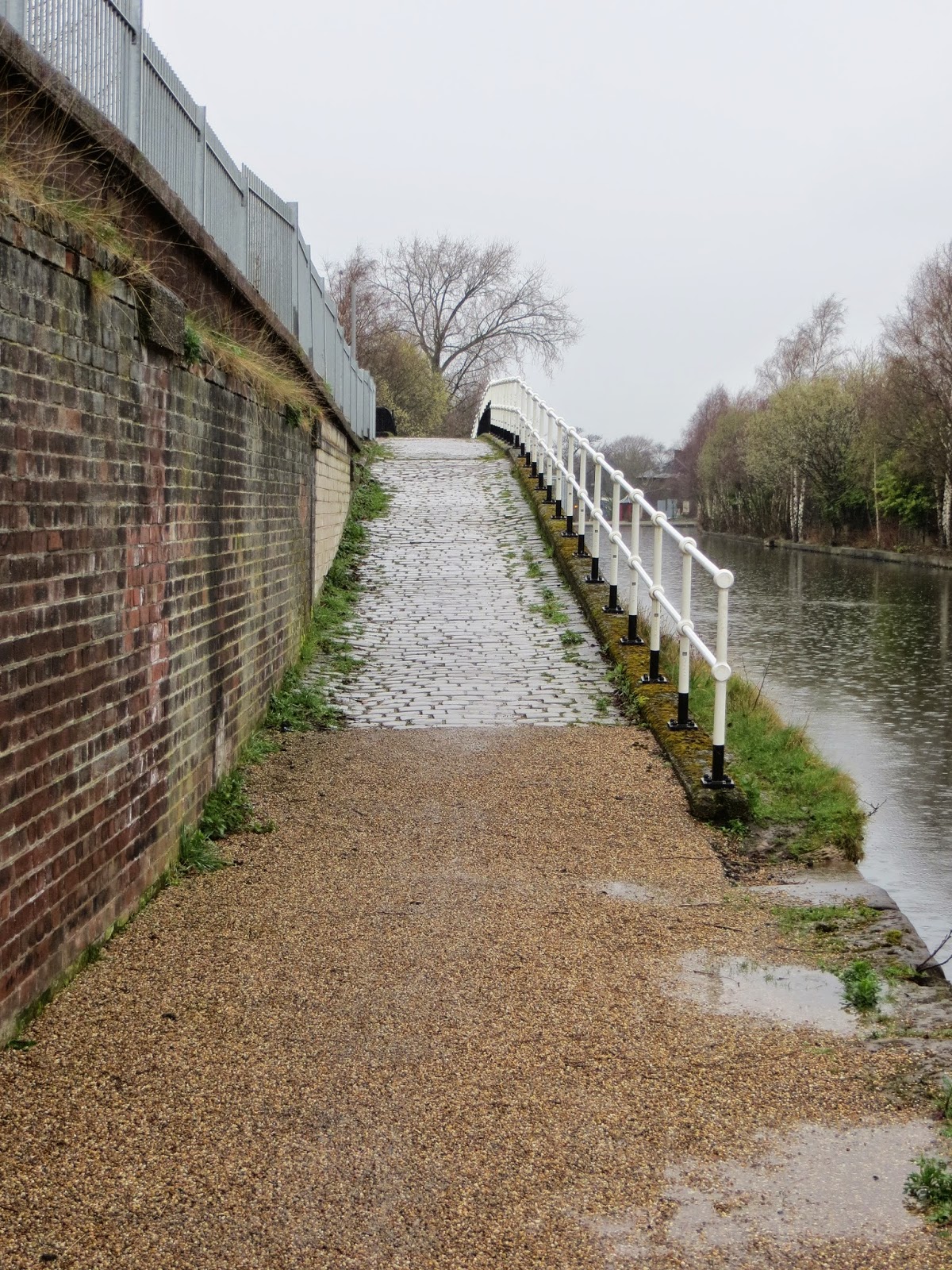 Near the Ship Canal there is this section of cobbles over a bridge.  It needs to be kept for historical reasons but unless you're on large, soft tyres it's painful and wearing on a regular basis. 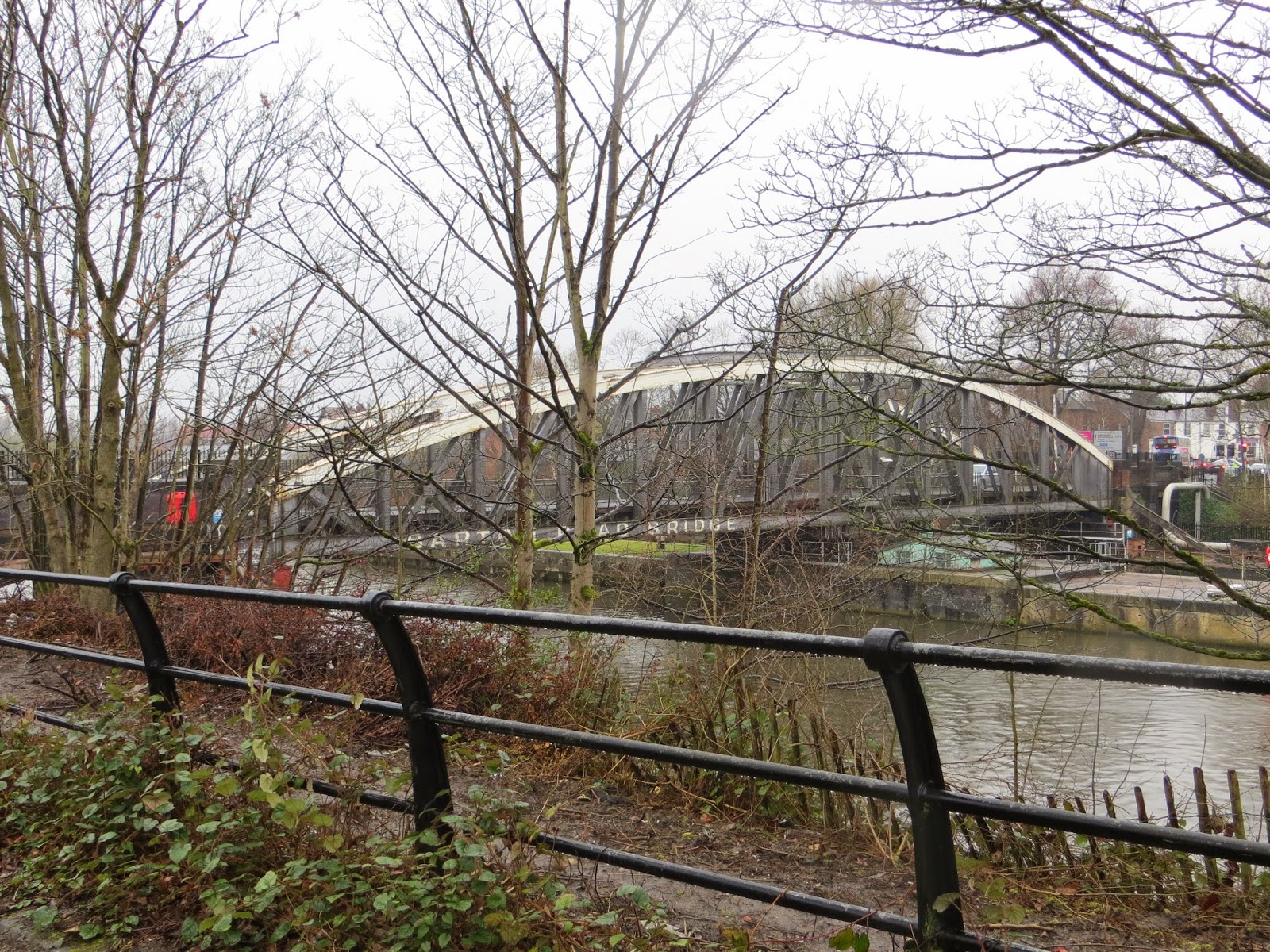 The Bridgewater Way exits to Redclyffe Road (goes across the bridge) via the existing Chapel Place.  The above is the best view you get of the traffic coming over Barton swing bridge. 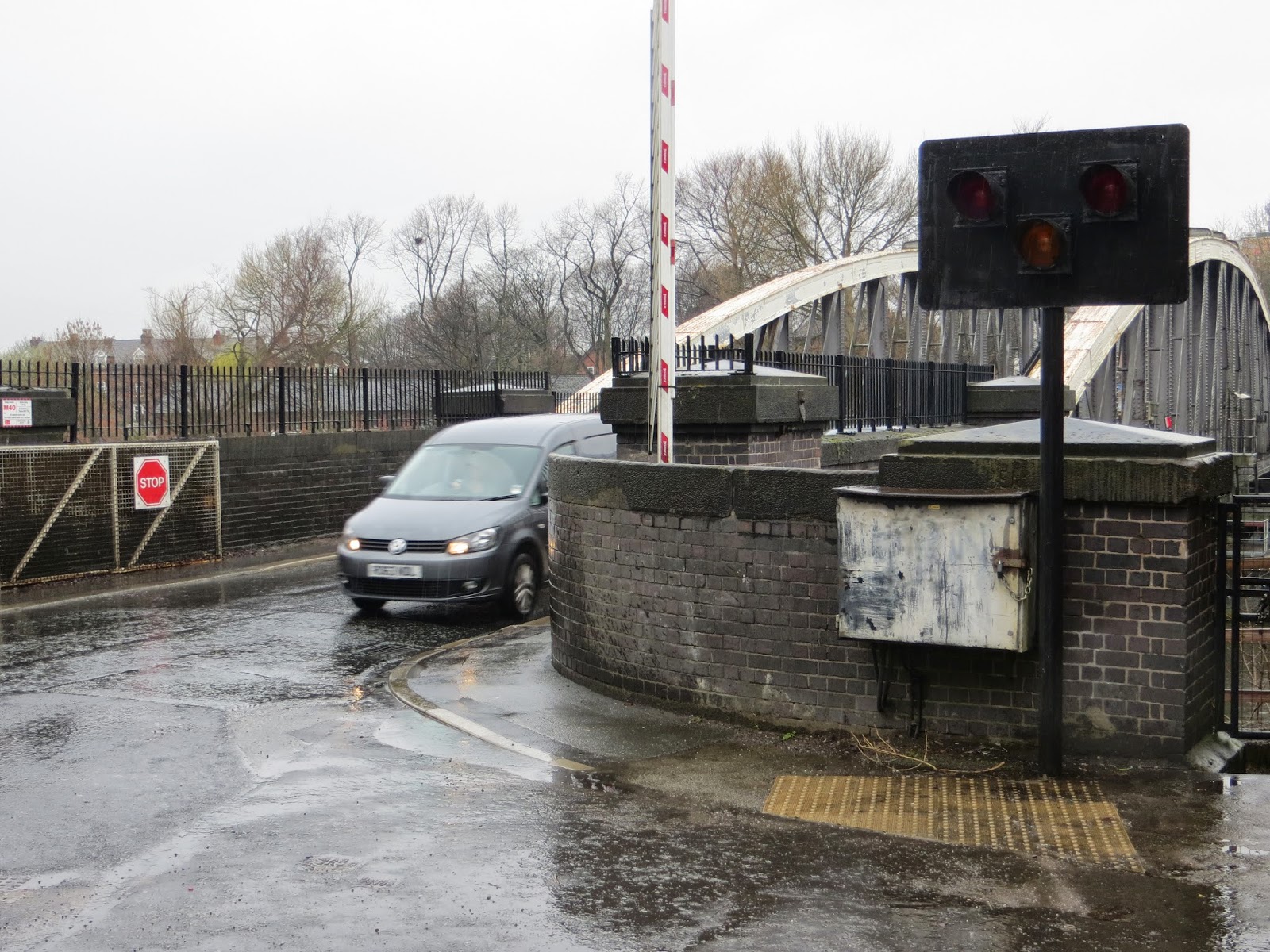 SOMEBODY WILL DIE HERE. This is the view of traffic coming over the bridge when you get to the junction.  In a word, lethal!  I've raised this with Trafford's cycle officer months ago and he was going to have a site visit, but I've heard nothing since.  At the same time I pointed out that further up the road there was an existing, unused entrance that would provide much better visibility in both directions.  The entrance is just by the pedestrian in the photo below. 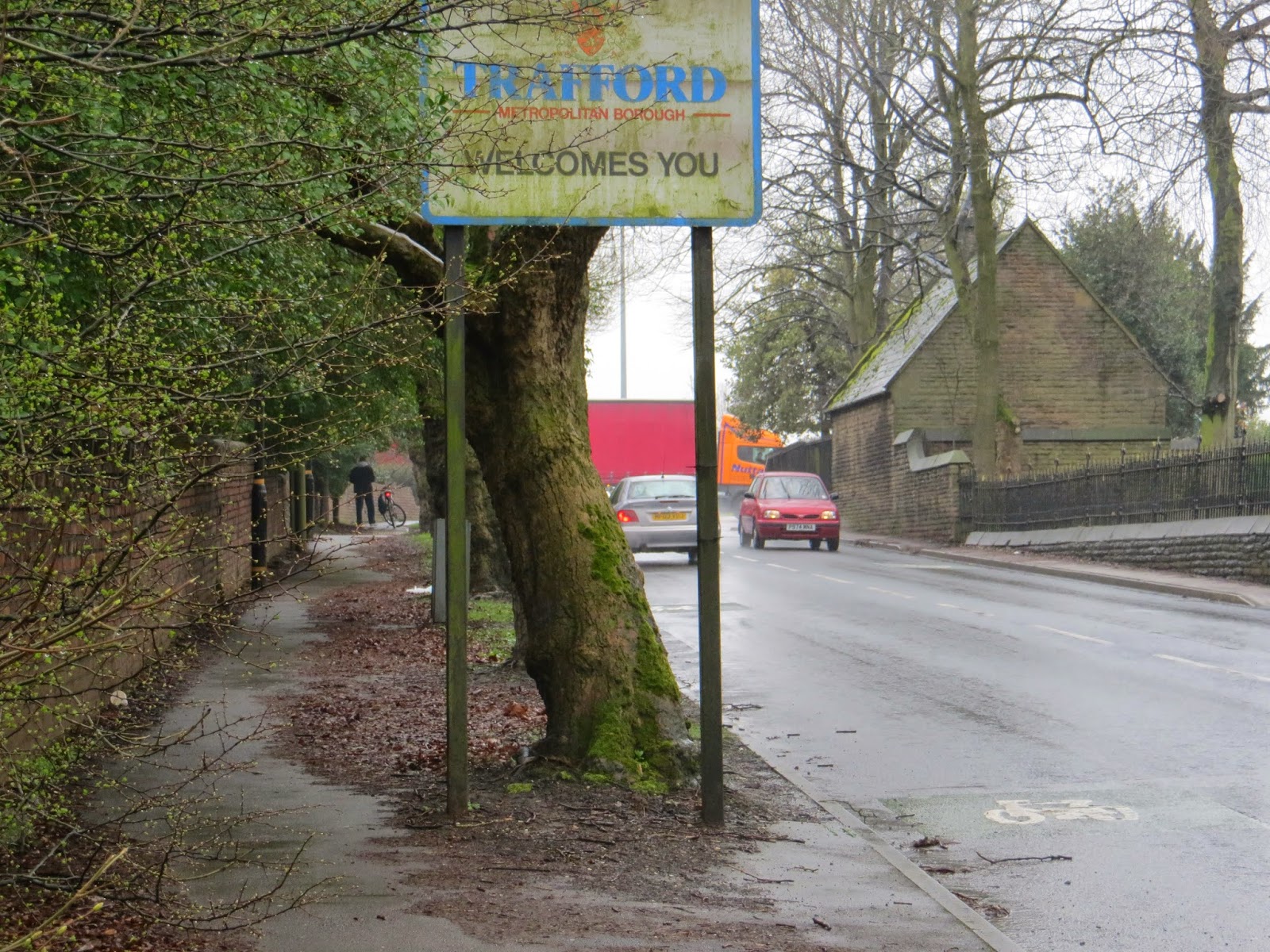 Note the useless cycle symbols painted on green squares on the road - these provide no protection whatsoever to a cyclist and do nothing to stop motorists pushing past. 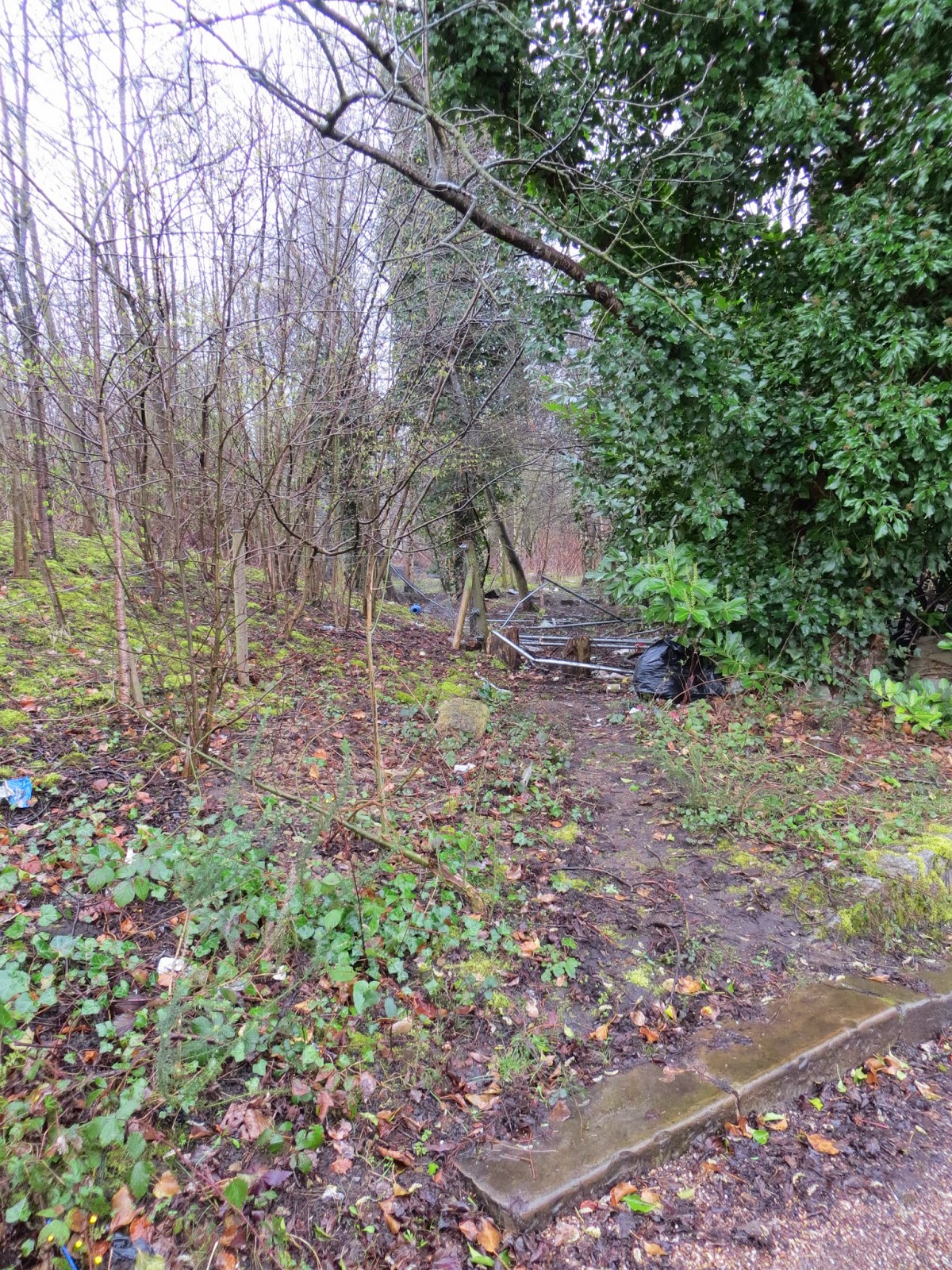 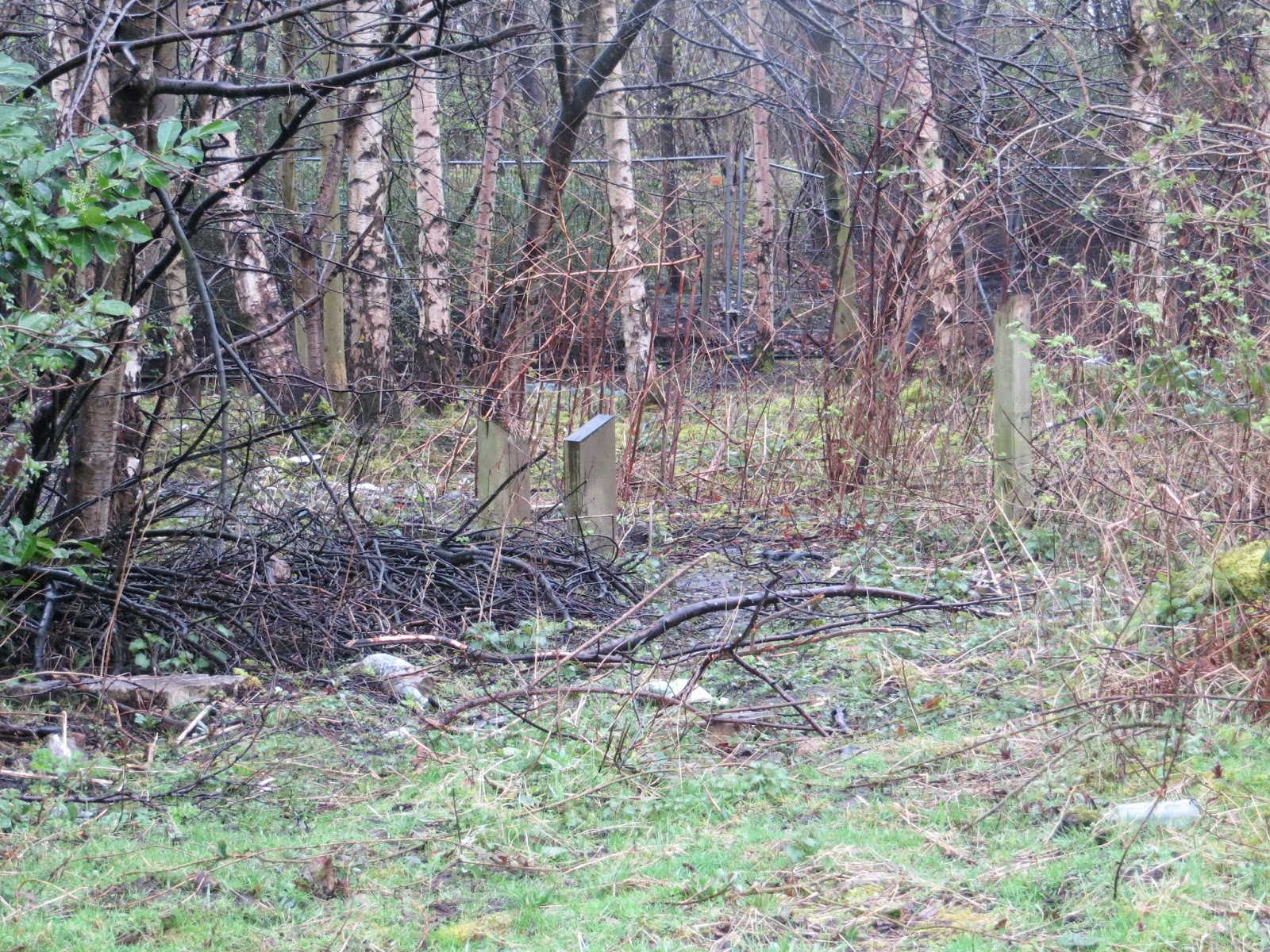 Who owns the small bit of wasteland between the canal and the road, I'm not sure but in the two shots  above taken from the towpath a path can be seen though it is not negotiable by bike.  In the last shot it even looks as though at some point there was an official route through. 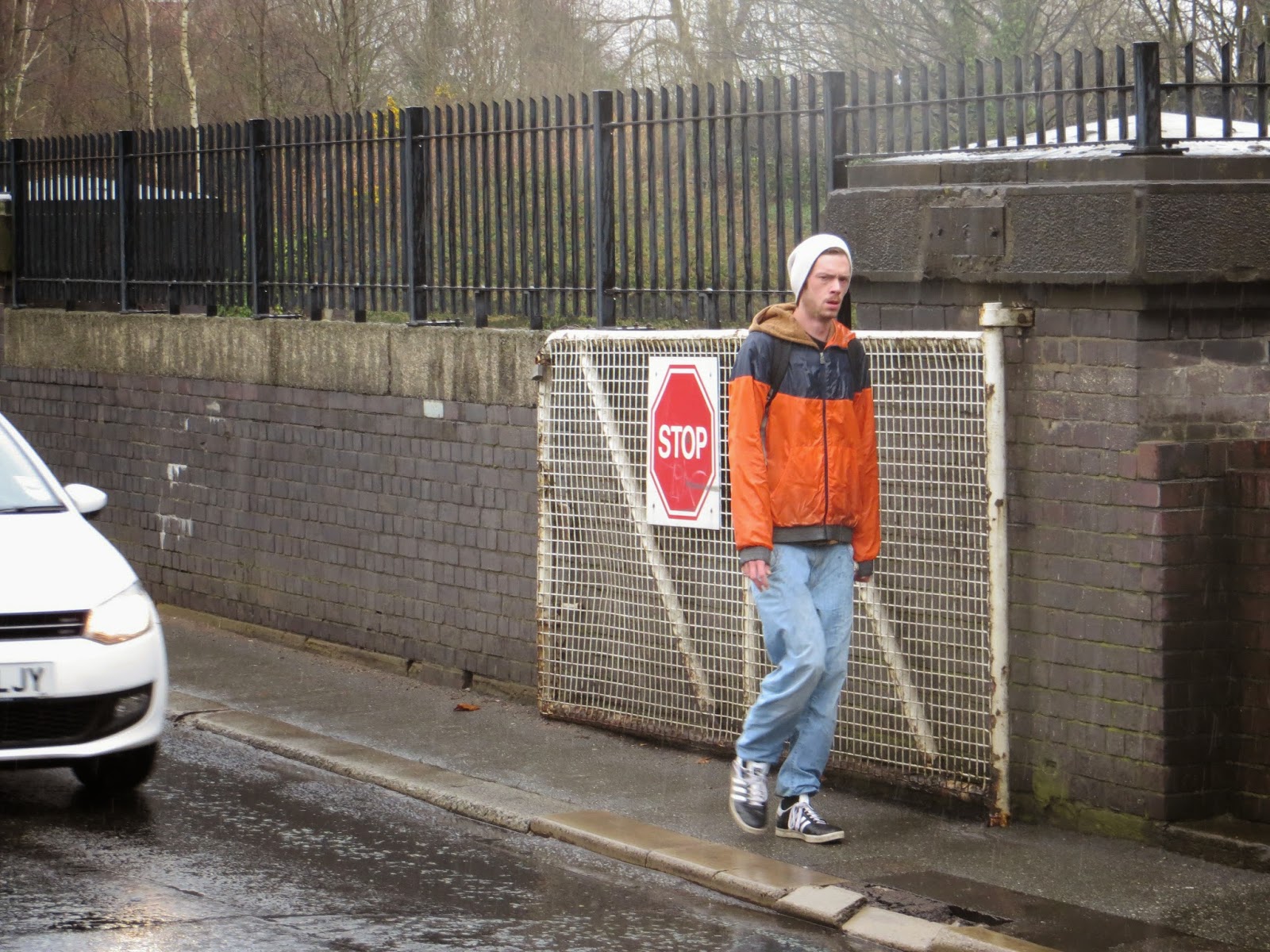 Crossing the bridge via the footpath is not even an option.  Not only because it is illegal but also because it is so narrow.  There is just enough space for one pedestrian to walk along.
at 16:30