I do a lot of cycling, most of it in order to get to work.  Currently this involves an eleven mile journey each way.  It could be shorter, seven miles, if I was prepared to tackle the main entrance to the Trafford Centre. I'll save that discussion for another day.  Sometimes I take a nine mile road route but having had a hit and run on a relatively quiet road just before Christmas with a subsequent complete lack of interest from GMP, I now prefer the off-road route.

I'm going to look at the provisions Trafford and to a small extent Salford make for cyclists along my route to work. Both have received money in order to provide infrastructure for cyclists, yet like almost all councils across this country are incapable of providing proper first rate facilities.

Survey after survey identifies that the main reason people don't cycle is perceived risk of danger from other road users - the motorist.  For years I've argued that this isn't real, but I've just been kidding myself, it is.  There are a significant number of motorists who's driving falls into the categories of incompetent or showing a dangerous disregard for other people. They're driving round in one tonne plus lumps of metal that can easily extinguish a life in the blink of an eye.

The result is that I have now established a route to work that is largely away from roads.  This route uses cycle facilities that have been developed over the last fifteen years and I'm grateful that they have.  However, as a day to day transport system they leave a lot to be desired. I have had to develop a bike especially for the route and accept that I will get covered in mud and shaken to pieces.  This is just not conducive to encouraging people to take up cycling as a means of transport.

Enough, let the journey begin. Firstly the Trans Pennine Trail (TPT) and getting to it. 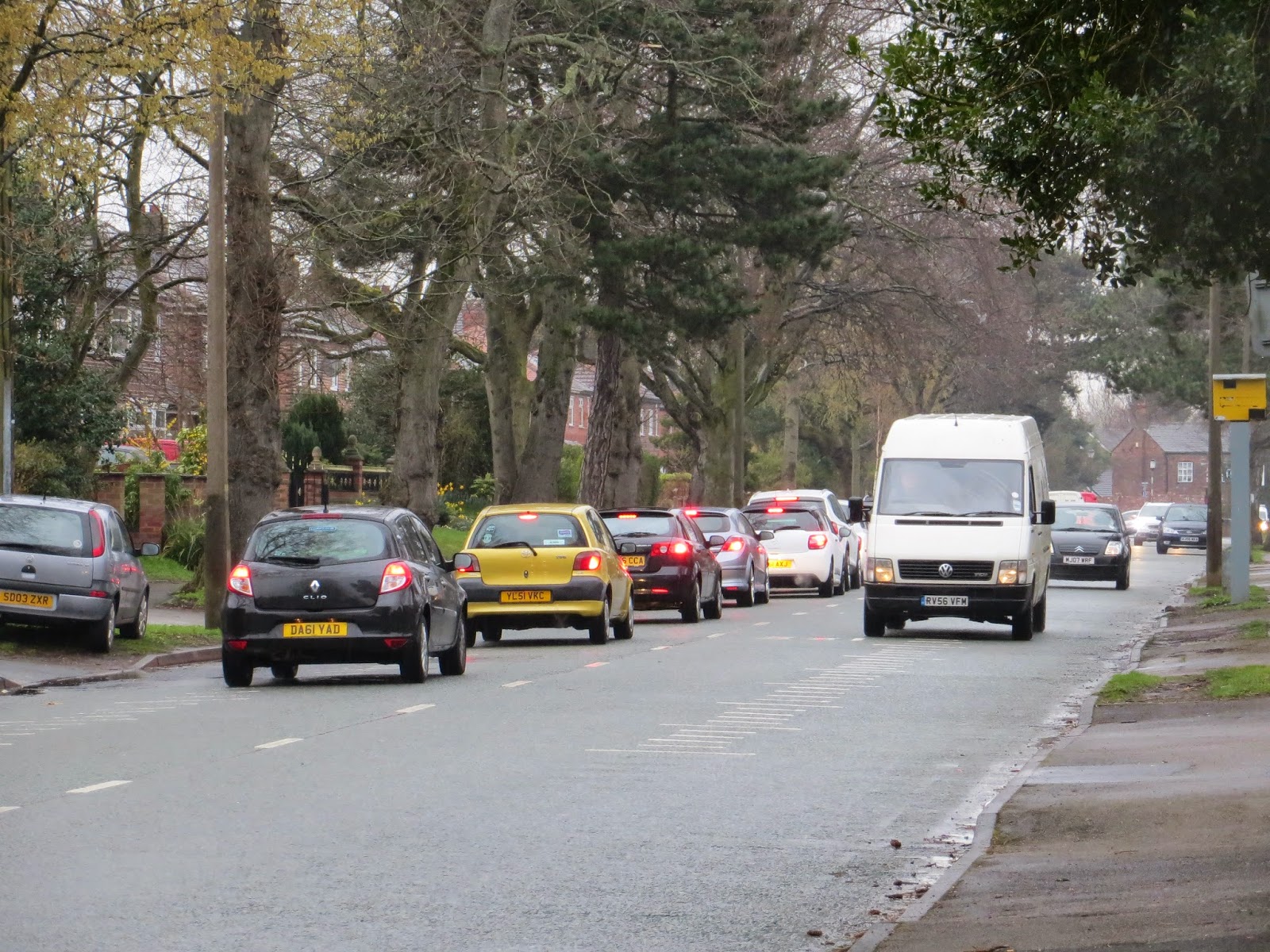 Manor Avenue is a wide road developed decades ago as the Sale West bypass.  More recently parts of the road have been re-developed to try and reduce the speed of vehicles, you can see the speed camera in the first photo.  There is plenty of space here for proper cycling facilities yet there isn't even a useless splash of paint on the road.  Cycle facilities would provide a more positive and effective means of speed control than the likes of the speed camera - hit the brake, wait a second, blap the accelerator, splat the child. 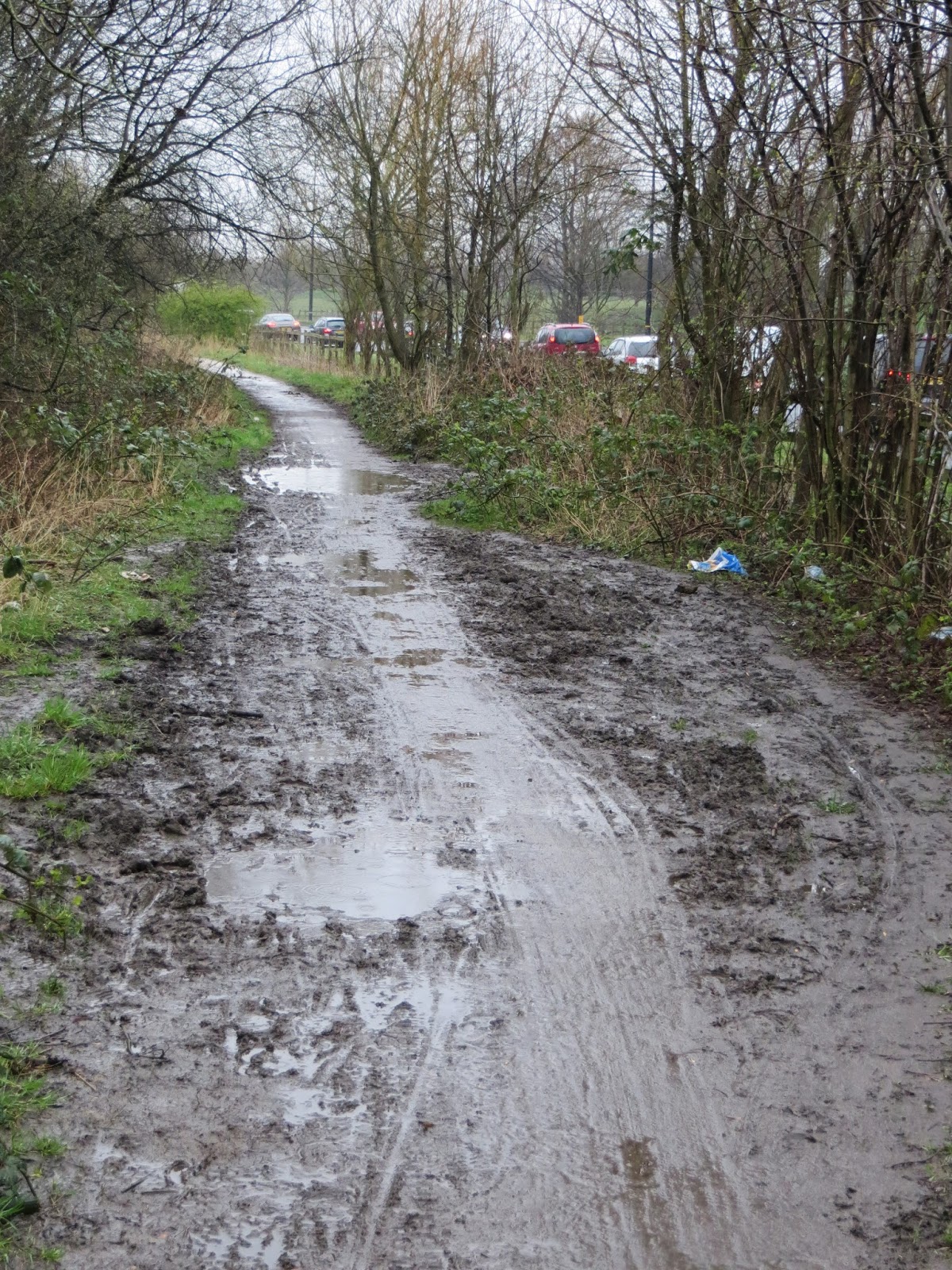 Having negotiated the queue of cars waiting to queue up on the Carrington Spur I quite quickly come to the first away from road cycle infrastructure - the Trans Pennine Trail (TPT).  The surface here is gritty and hard packed which flicks up onto the bike and coats those expensive chains and gears in a gritty paste.  I wouldn't want to ride a normal bike across here on a regular basis, far too expensive on maintenance.  Add to this a lack of clearance of fallen foliage and several stables in the area and the results are frequent patches of churned up mud like the above.  Stretches of the trail are constantly wet even after several days of no rain.  In the above you can see where cyclists have tried to go around large puddles, but sometimes it is impossible to avoid going through them.  The thin layer of mud adds to the paste grinding away at your bike's mechanicals and can make bike handling sketchy as the tyres slide around. 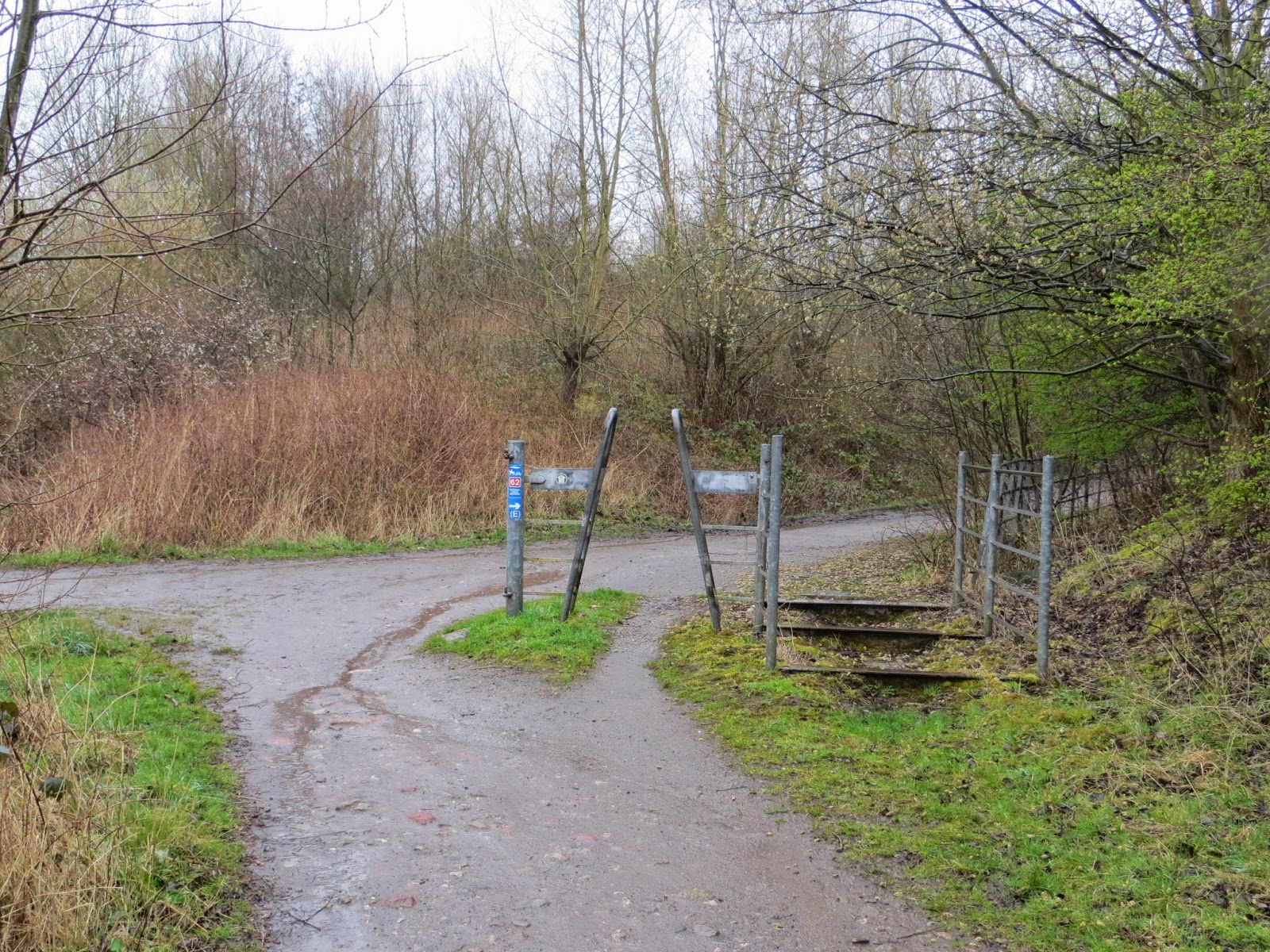 The TPT through Trafford is plagued with anti-motorbike structures like this.  They didn't work and a lot have thankfully been bypassed. However, the bypass is never official and usually have issues.  In this case it is an off-camber stoney/broken brick surface leading at a shallow angle onto a higher, in places, tarmac surface.  Any experienced cyclist will recognise the danger of a raised edge at a shallow angle - strong probability of tarmac - body interface. 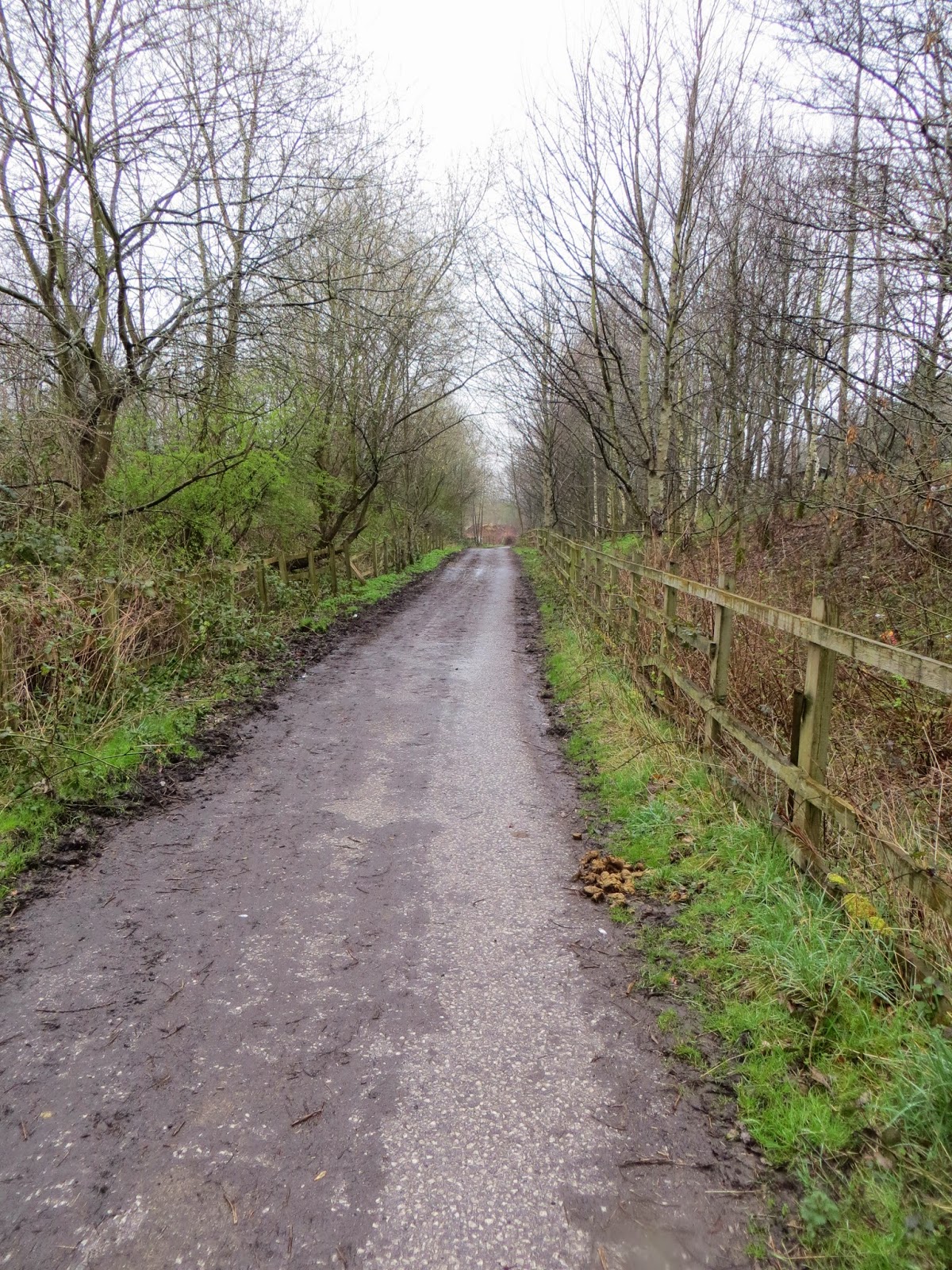 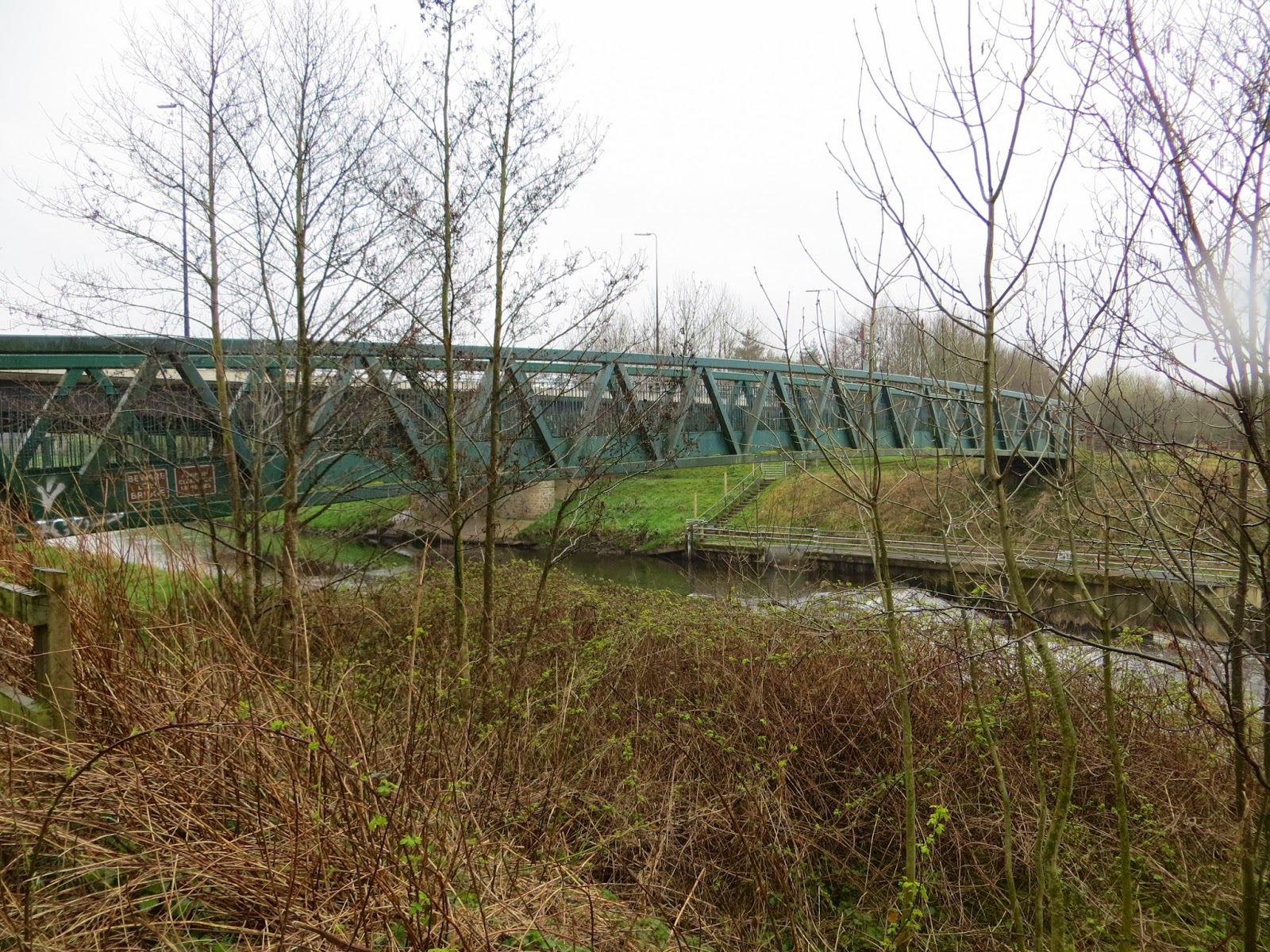 The bridge across the River Mersey.  This is a very important non-vehicular link between Ashton-Upon-Mersey/Sale West and Urmston/Stretford.  The alternatives are the A56 at Crossford or the Flixton mile, both quite large detours and neither in the slightest bit appealing from a safety point of view or being pleasant. 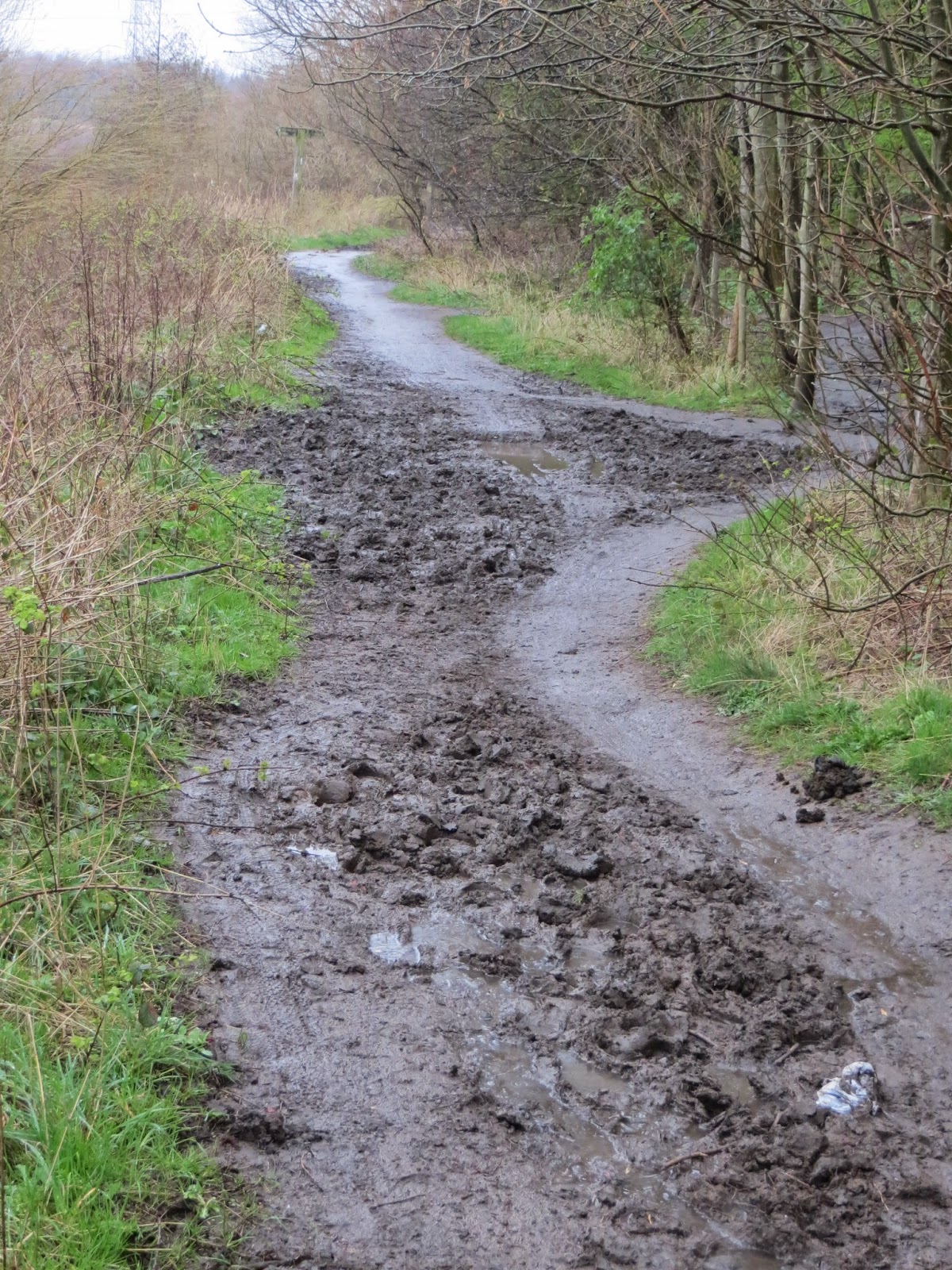 If you turn left off the bridge you'll very quickly arrive in Urmston.  However, you have to negotiate this, which, according to the Transport for Greater Manchester cycling maps is a 'Traffic free route - good surface'.  A correction would be 'Traffic free route - totally inappropriate surface'.  The surface doesn't get any better when you head around the corner.  It may or may not be ok for horses, it won't encourage occasional leisure cyclists and is just not acceptable as part of a transport system in a country with the weather system we have. 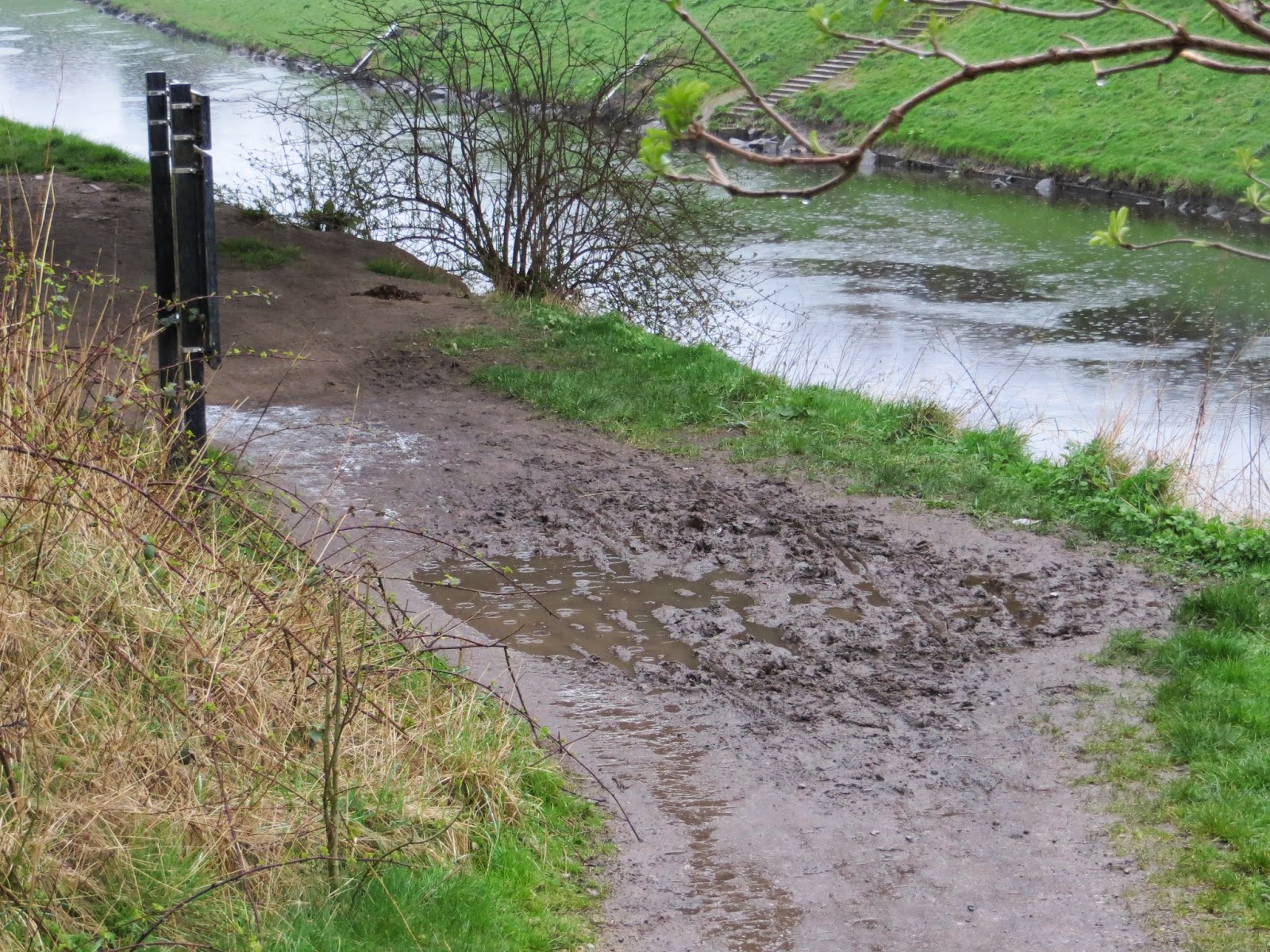 If you turn right you continue along the TPT but are immediately faced with this at the bottom of a reasonably steep slope.  If you're used to it then it is currently possible to get through ok - keep to the right on the descent and then dive to the left of the puddle. 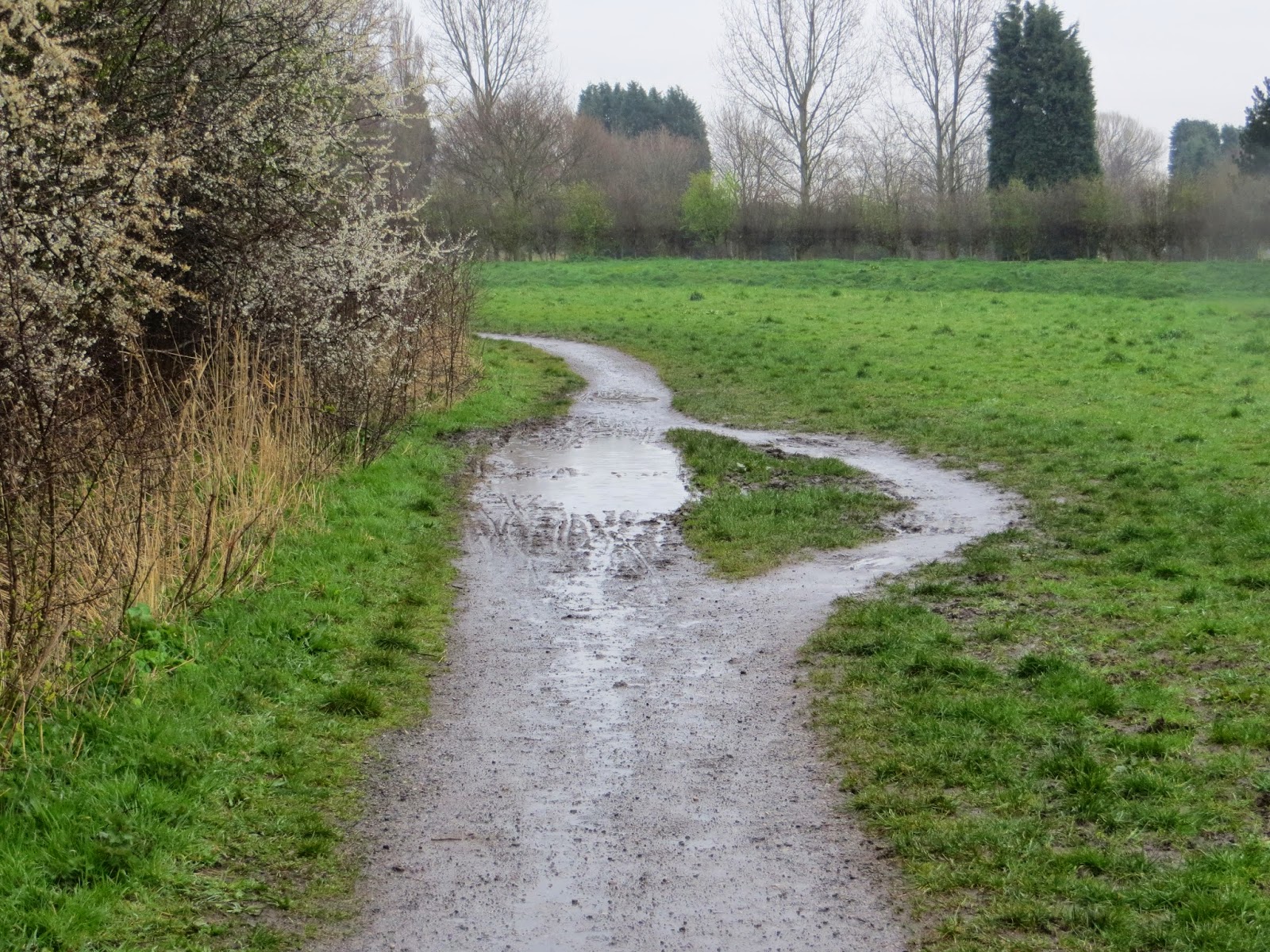 The route follows the Mersey bank for a short way.  There are puddles, some pretty much permanent like the above, all along this part.  The path is narrow and frequented by horses and dog walkers making reasonable progress on a bike awkward and risky. 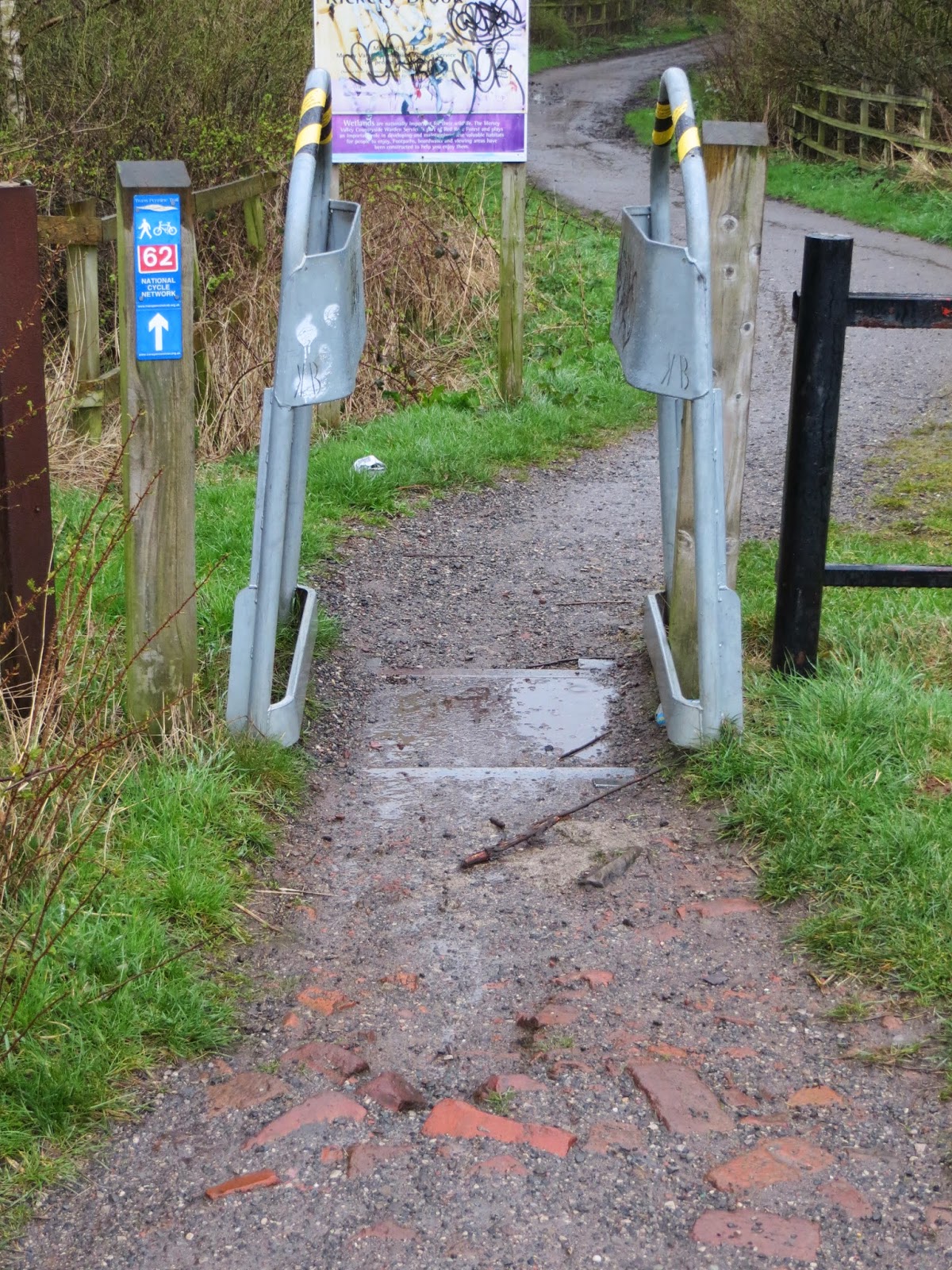 The TPT turns away from the Mersey through this safety hazard.  Rough broken brick surface to throw you off balance and sheet metal edges that are just at the right height to slice my fingers off if I get it wrong.  A drop handle bar bike fits through the gap, a flat bar you have to wiggle through with the bars at an angle whilst trying to lift the front wheel up. 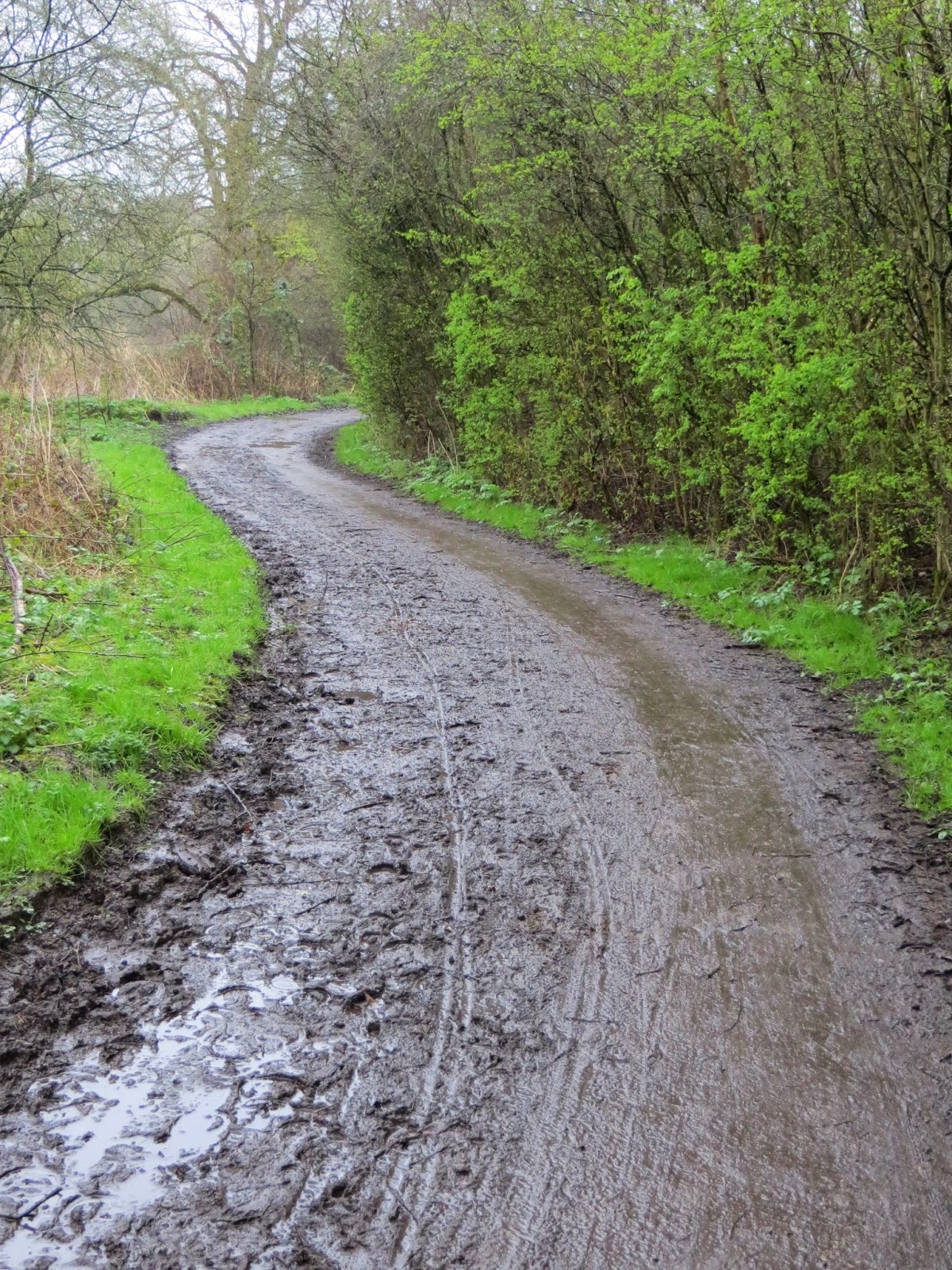 The track from this point is wide and whilst in many places twin paths have been worn permitting easy travel in both directions at once there are a lot of places like the above where there is only one semi-decent bit of surface.  Here the mud completely covers over half of the track with a slimey gloop that tyres just will not grip on.  The result is that cyclists and walkers are restricted to one small part of the path heading around virtually blind bends.  Head ons or near hits are virtually inevitable unless everybody goes at walking pace - what's the point of it being a cycle path then? 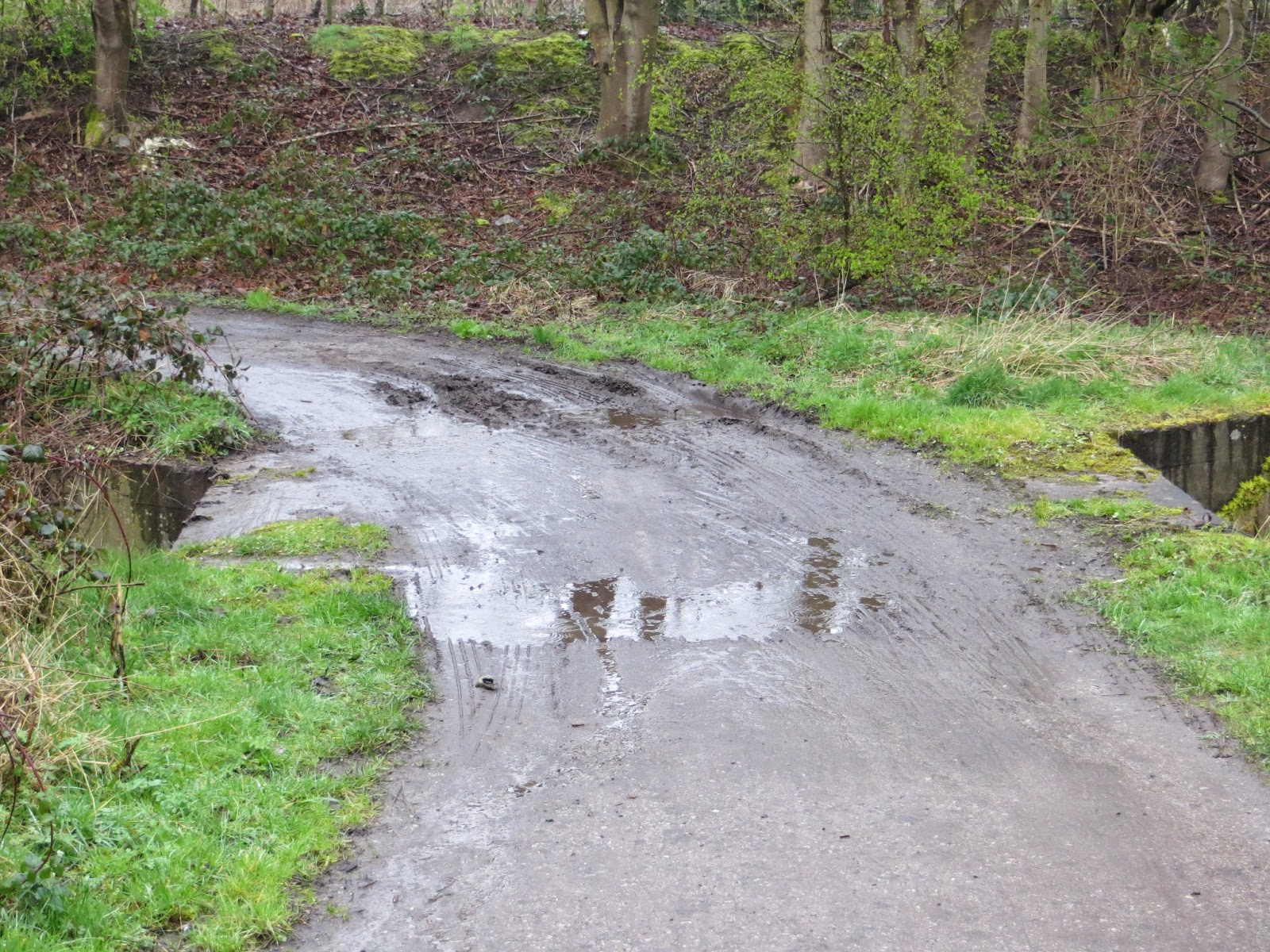 As part of widening the M60 to ten lanes wide the TPT was diverted from its original route through a pitch black rough surfaced tunnel - whoever thought that was a suitable safe route should be fired and never allowed to design transport systems again.  The new route crosses Kickerty Brook by this concrete bridge.  There's not much wrong with the bridge itself except that you are turning through 180 degrees and there are muddy puddles on both approaches.  This results in a slippery surface exactly where you could do without one. 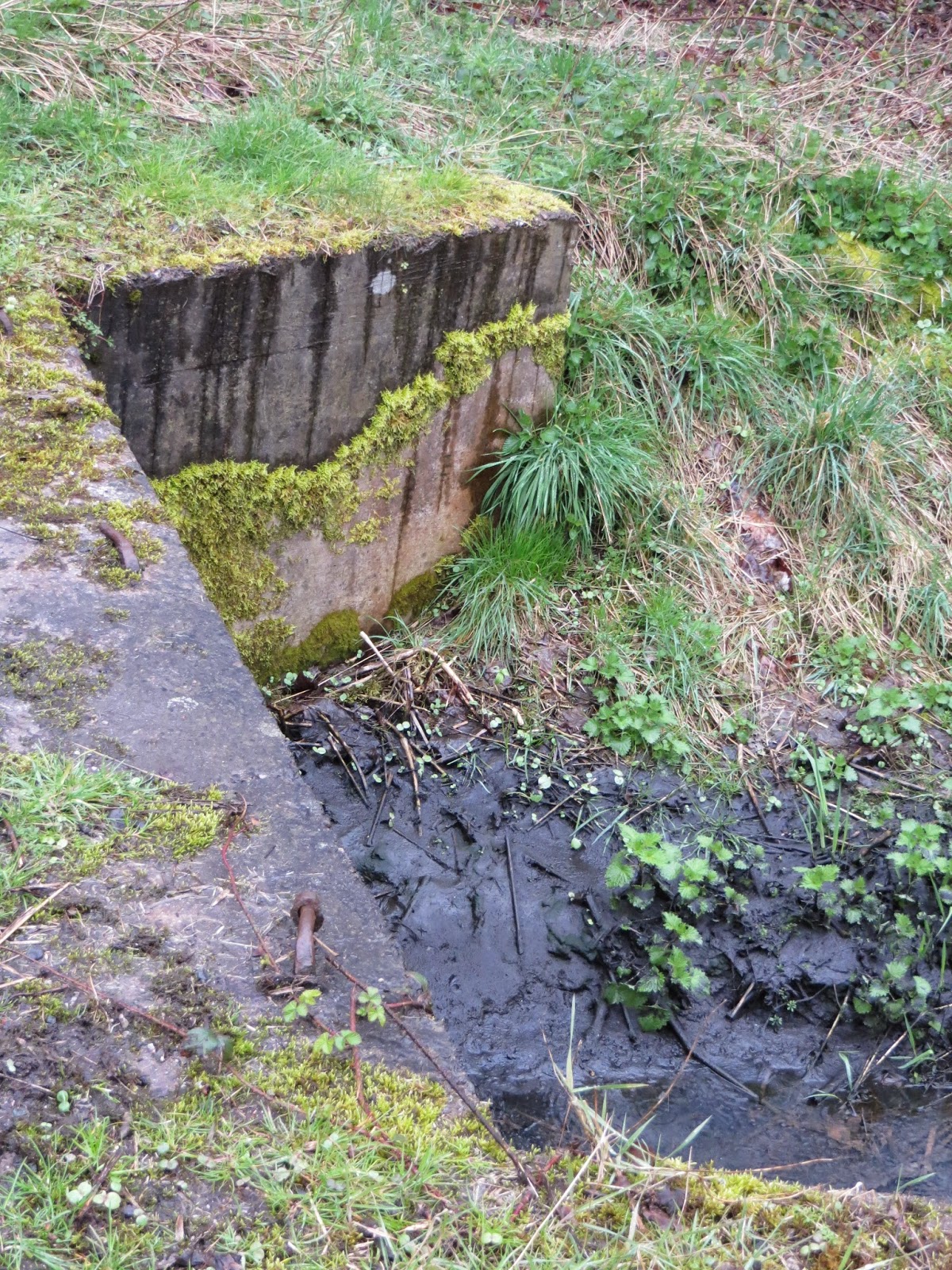 Get it wrong and this is where you are going.  It won't be pleasant and it will hurt - a lot. 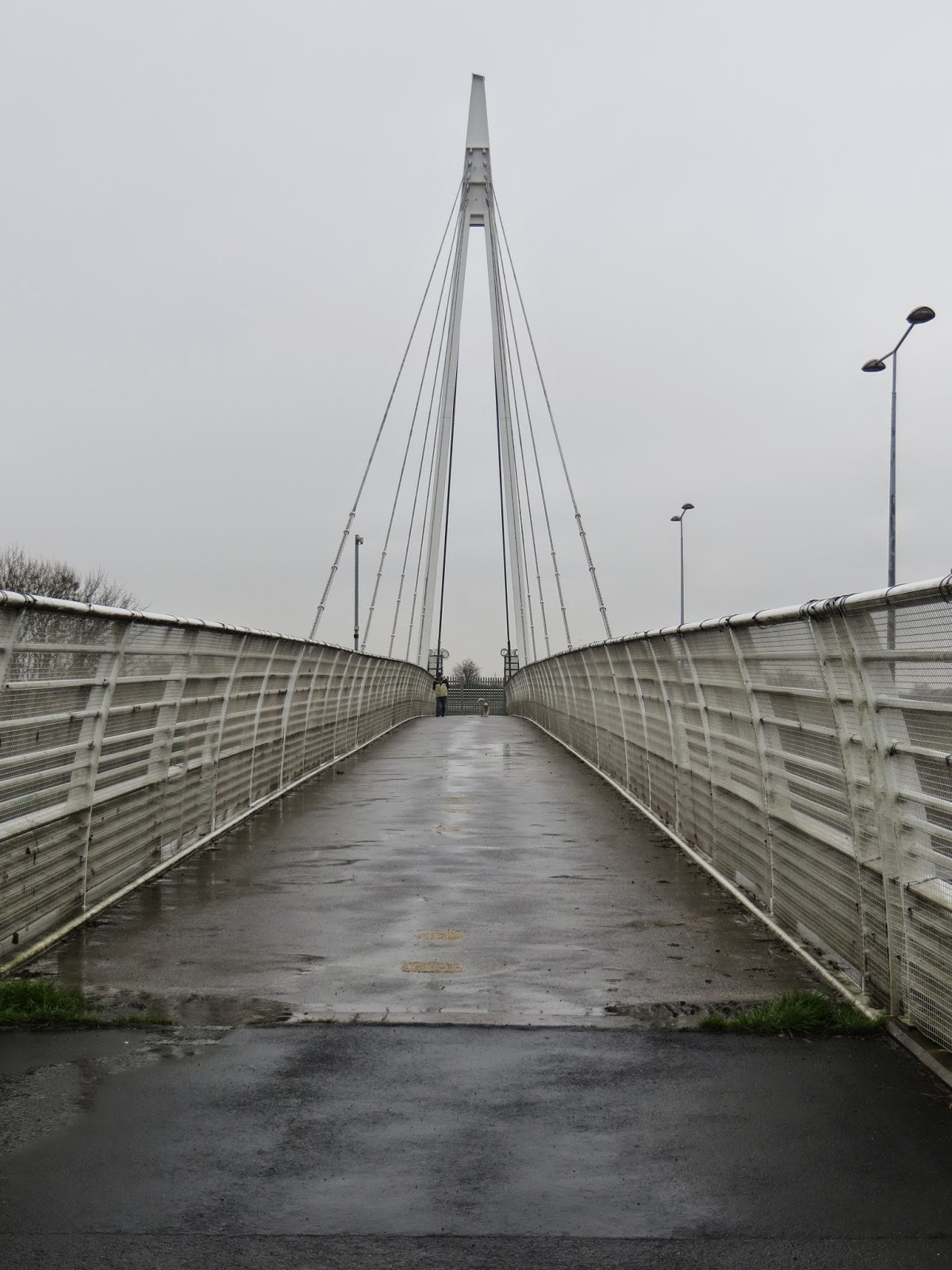 The bridge over the M60 shows what can be done when proper levels of money are invested.  Nice tarmac surface, decent width.  Not sure what the spiral decent on the Stretford side would be like in the ice though! 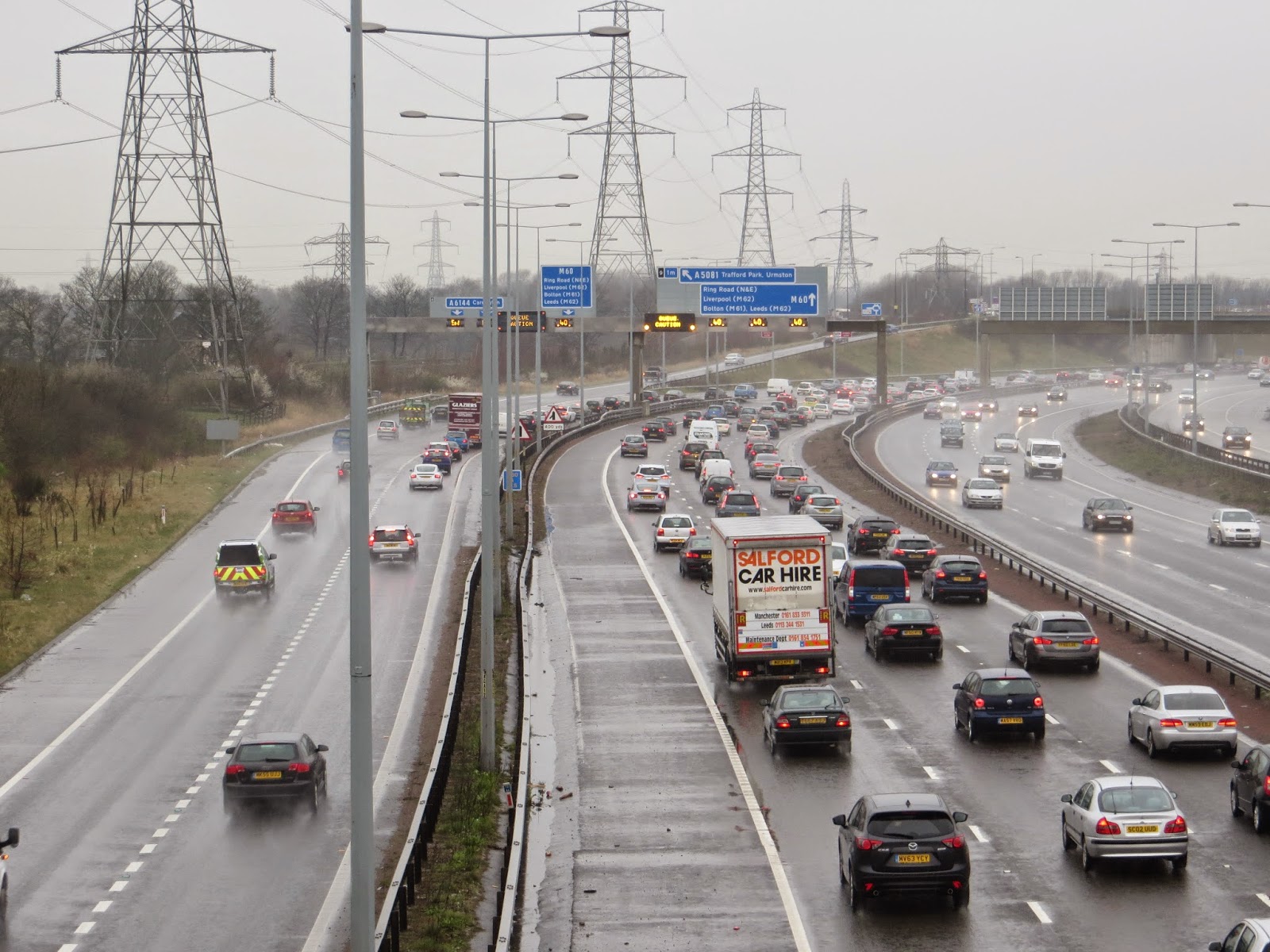 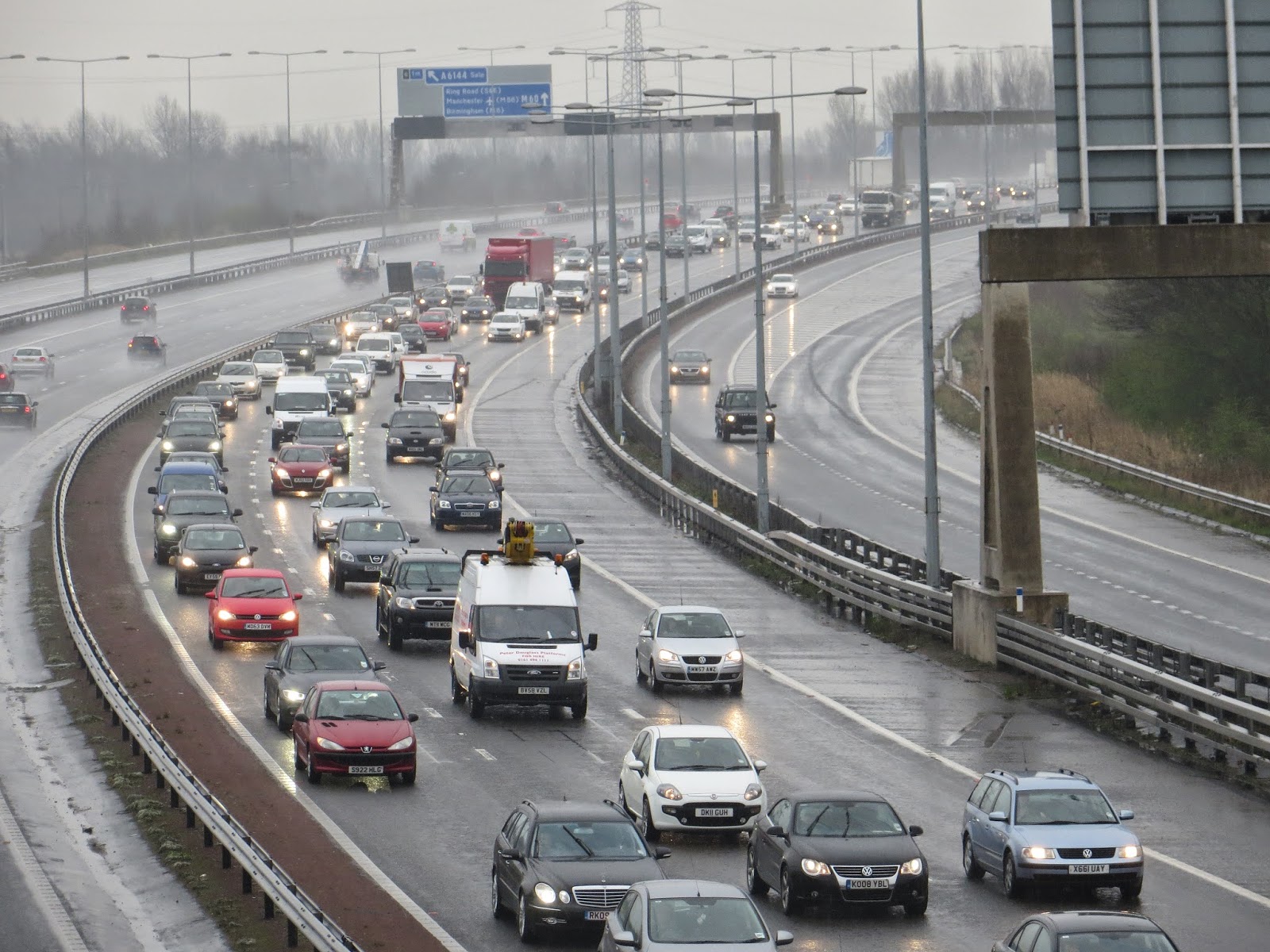 I'd hate to think just how much money was thrown at this widening scheme in the interests of keeping the traffic moving.  These views are fairly typical of morning rush hour.  I suppose I should grow up, get a proper job and earn some real money then I could join them. 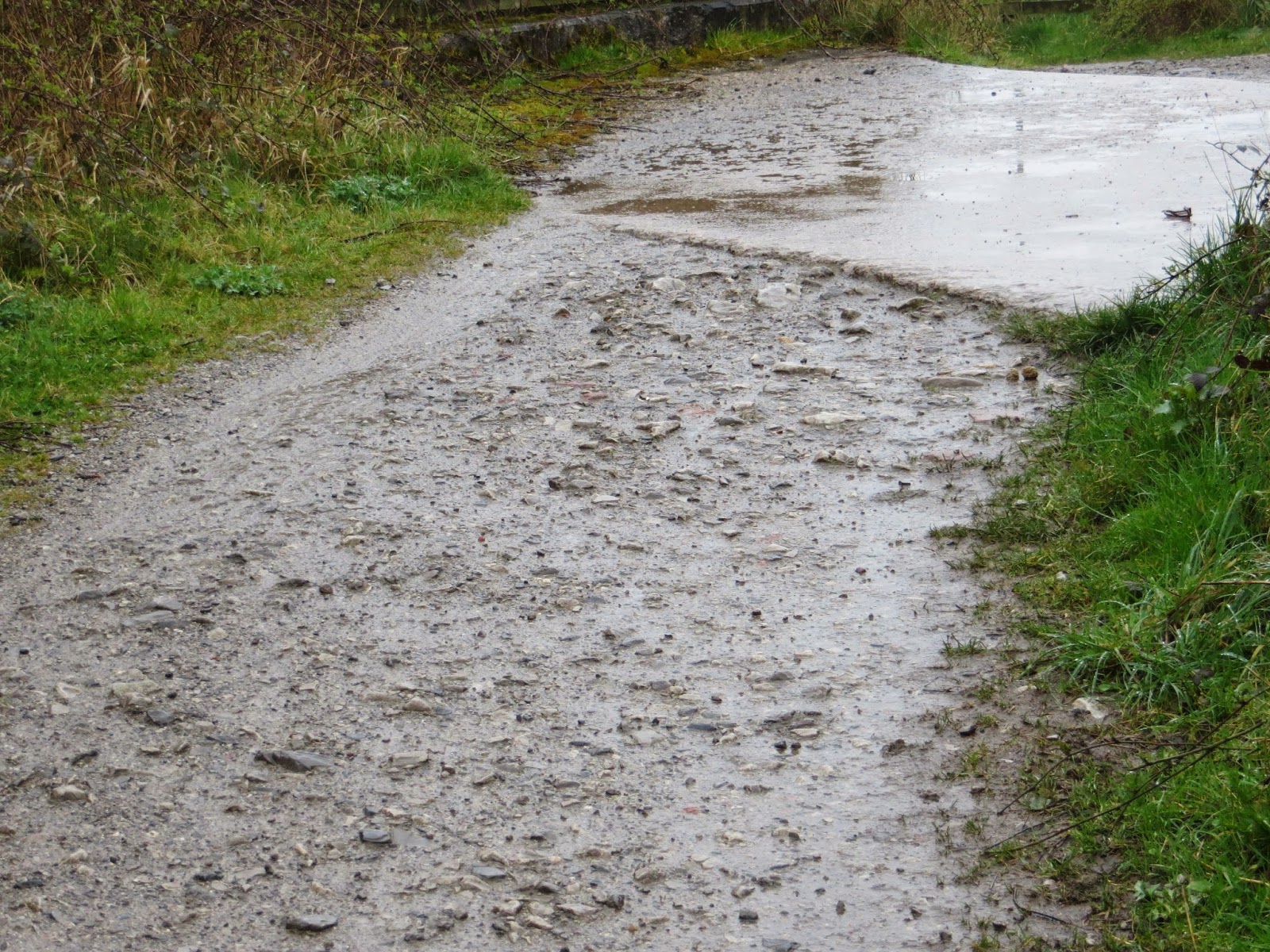 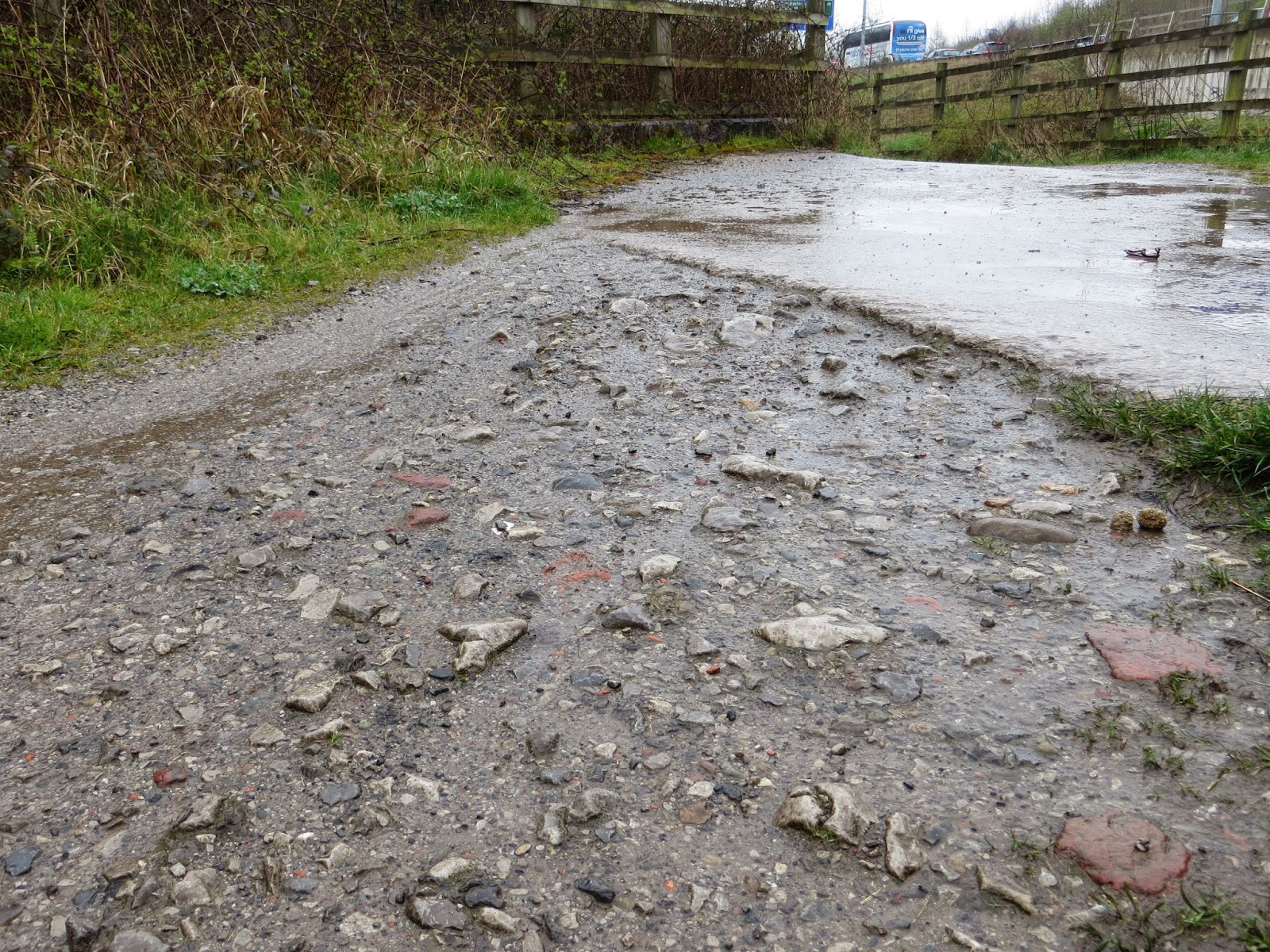 The route from the bridge is a rough stoney surface accompanied by the compulsory path wide puddles.  The above shots show the typical surface which make anything other than big fat, soft, off road tyres extremely uncomfortable and damaging to the bike. 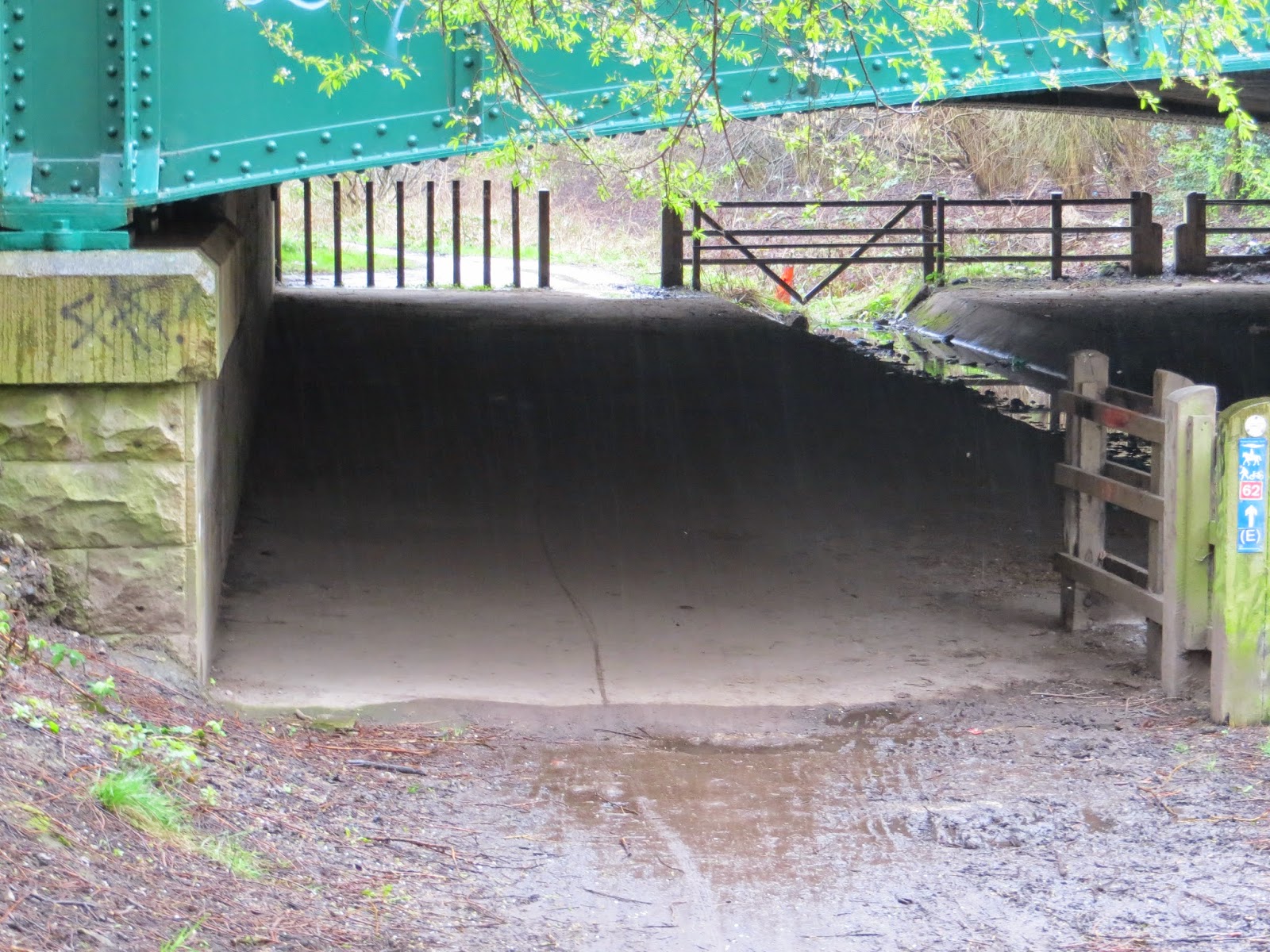 The path passes under the A56 via this gloomy bridge.  Most of the time it is impossible to see what you are about to ride over even during the day. 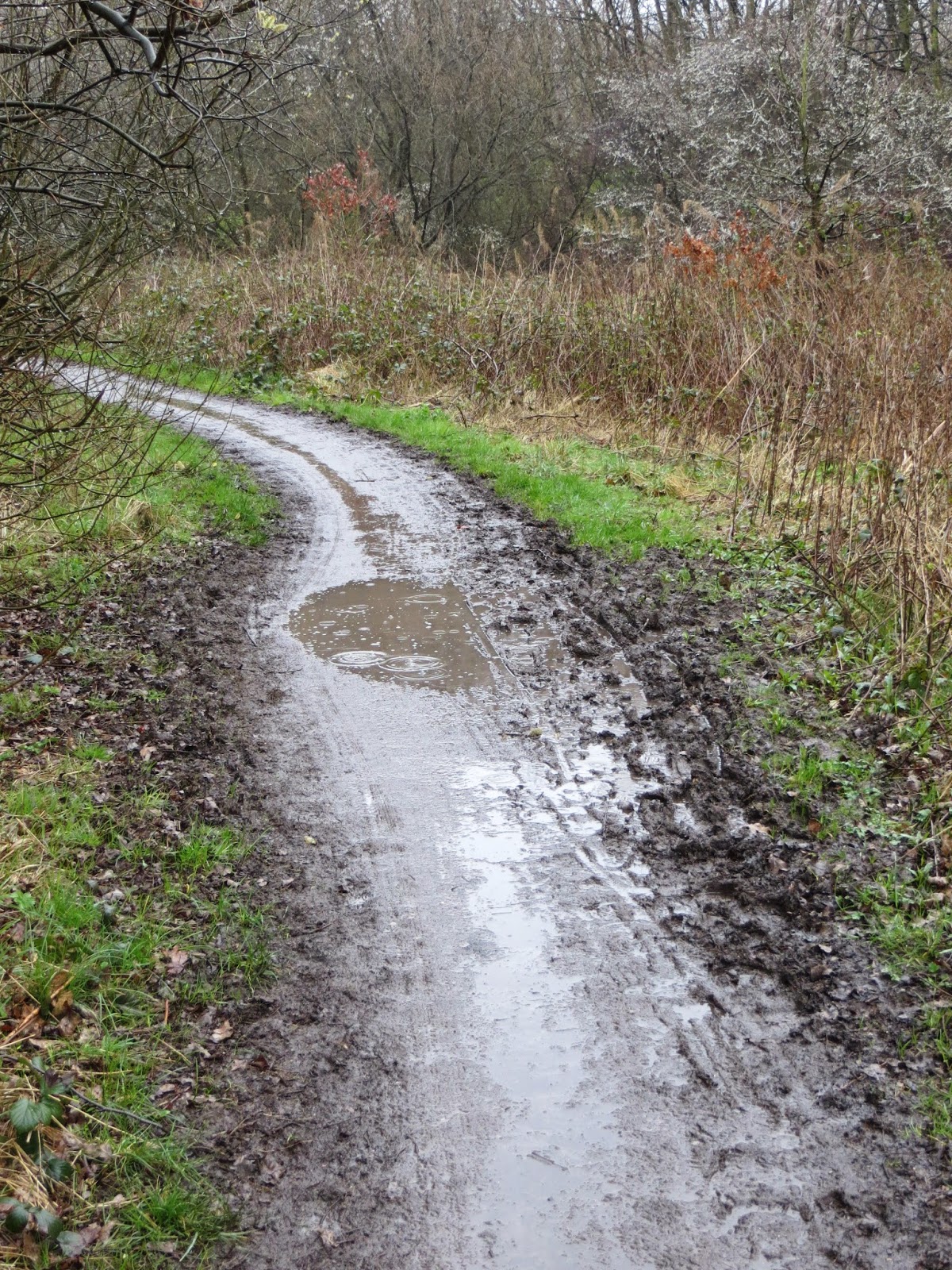 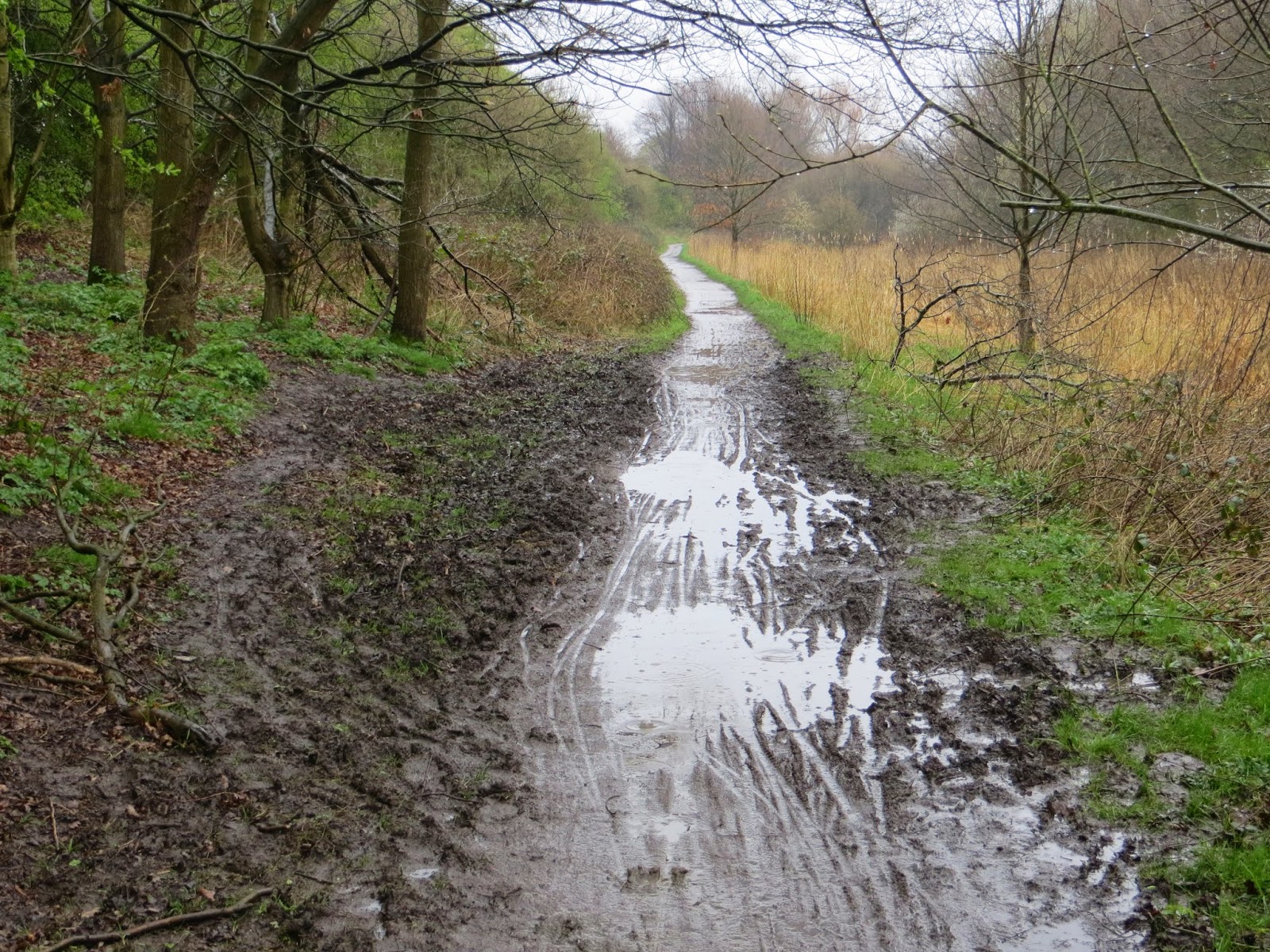 Away from the A56 a lack of maintenance has resulted in a path that was once six foot wide now being a thin muddy strip.  The first photo shows the muddy state of the path on a tight bend with no visibility lines.  The second shows a series of three constant puddles.  These three are particularly gloopy and you can see the state of the bank to the left where people have tried to avoid them.  The problem along this stretch seems to be the playing fields to the left draining across the path to the brook on the right. 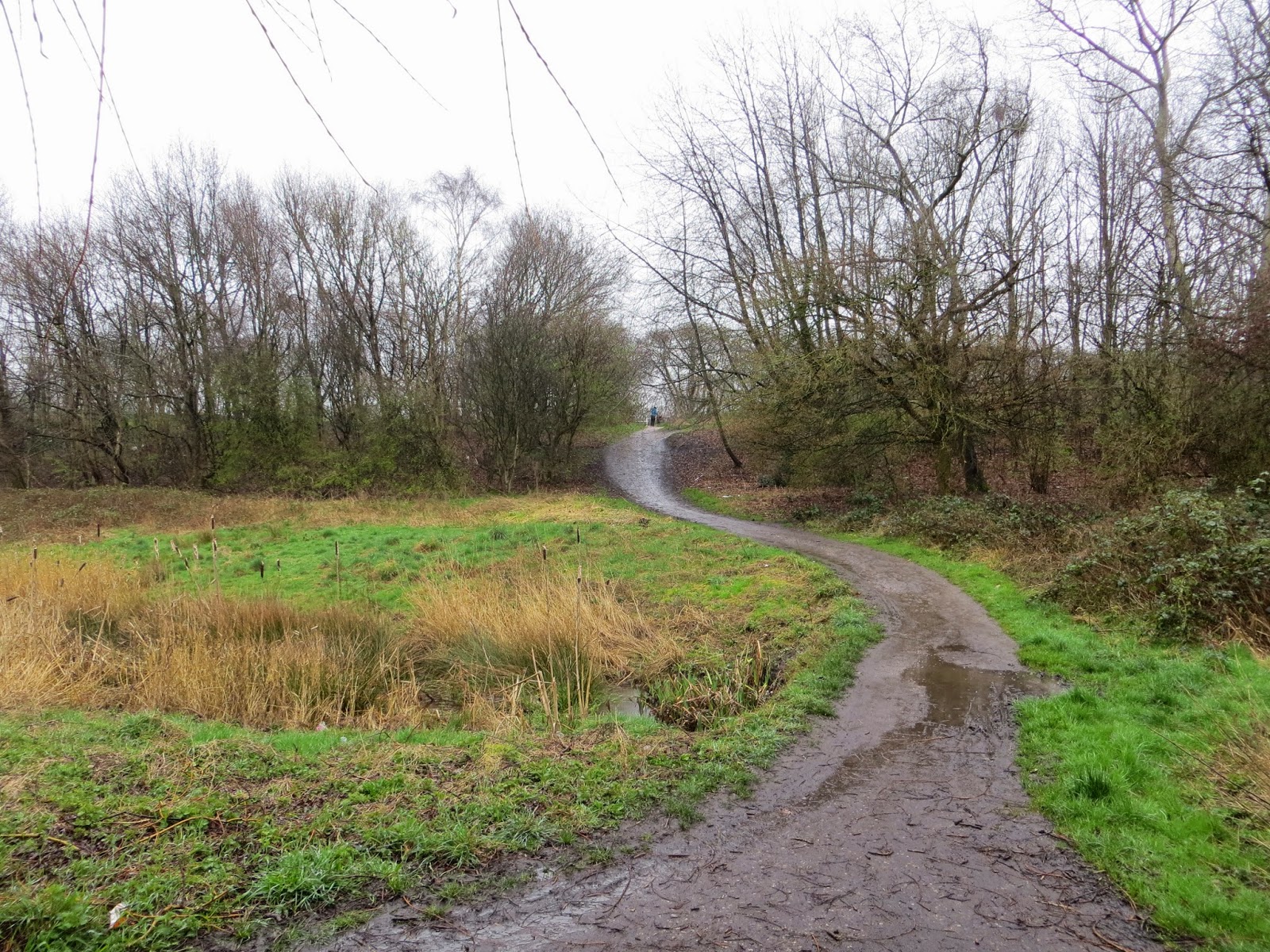 At this point I leave the TPT and join the Bridgewater Way via this link.  Across the brook the surface is badly broken up and then gives way to yet more of that stoney surface as you try and climb the steep slope to the canal.  Coming back is hair raising and down right dangerous if people try and come up at the same time as you go down.
at 14:50